Advice for the candidates on their "veep" picks: Go old, and go white. 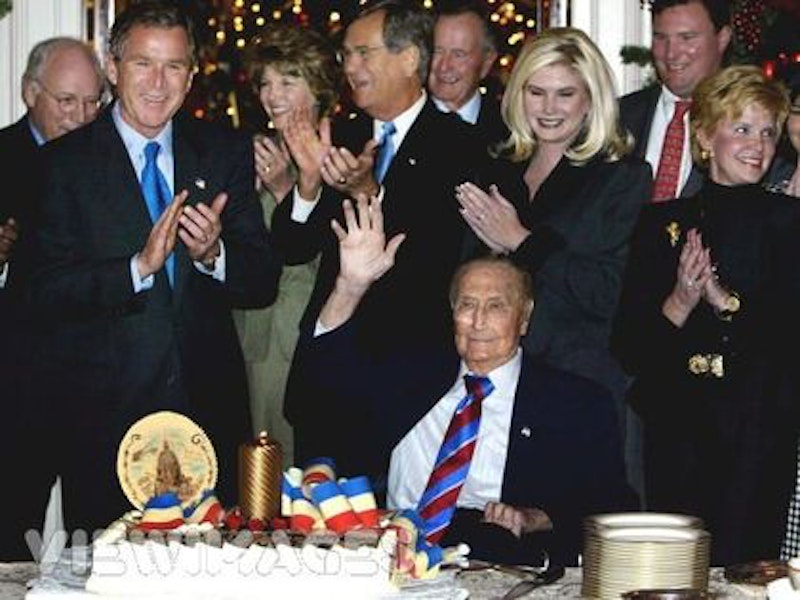 Everyone seems to have a theory or strategy for picking the vice presidential candidates. After all, it’s fun to do—it’s like the NBA Draft but for politics. You hear people saying things like “McCain’s gotta go with a young prospect like Bobby Jindal” or “Obama is weak at the Center position—he should pick Ted Strickland” or “I like Jim Webb’s ability to shoot 3’s and drive the lane.”

In the end, there’s no exact formula for figuring out whom a presidential candidate will pick. John Edwards didn’t help John Kerry win his home state of North Carolina (although he did balance out the “John” ticket nicely, saving the campaign millions of dollars by allowing them to only print one first name on their merchandise). Dick Cheney was clearly a pick not to win any one state, but rather to help Bush with policy issues, such as explaining the difference between a “Prime Minister” and a “Prime Meridian.”

Having said that, I’d like to give my opinion on the ideal “veep” candidates: however, I prefer to go outside of the realm of the usual names being thrown around. Be aware—I am in no way being satirical.

First up, Barack Obama. Now, I’m always a fan of symmetry. I like when yin mingles with the yang and makes sweet, circular love. So, Sen. Obama should be looking for a candidate to balance the ticket, and to do that, we must look at his flaws. Number one: he’s young, and we all know that “young” automatically equals “inexperienced.” After all, what did Alexander the Great do with his life before he died at age 32? Instead of serving as the president of the Harvard Law Review, being a community activist, or teaching constitutional law at the University of Chicago Law School, Obama really should have been gaining more presidential experience by doing things like starting an oil and gas company during an energy crisis or becoming part-owner of a shitty baseball team.

What’s another flaw? His scary name. It’s so… ethnic. There’s a harsh “ock” sound in the first name, his last name starts with an O, and we all know what name lurks in between. So the VP should either have a very plain name or a very pleasant name. The first name that popped into my head was “Cotton Candy,” but that sounds too much like a stripper’s name. So, I decided an ideal VP candidate for Sen. Obama would be named “Gummy Bear” (specifically, “Gummy Not-Hussein Bear”) because everybody would love a candidate with a name like that.

Okay, so far we’re looking for a plain-named, old, white person. Oh, did I not mention that the VP must be white? We don’t want to go scaring the electorate with a ticket featuring two brown people; what kind of science fiction movie do you think we’re casting here?

What else about Obama? He’s an elitist. Nothing makes my blood boil more than a presidential candidate who thinks he’s better than me. I need a president who is only as intelligent and accomplished as I am; maybe even a little less so. In order to balance the ticket, Obama’s VP candidate needs to be of an intellect that is far inferior to that of the average person.

So, it looks like the Senator should pick a running mate who is old, white, has a safe-sounding name and is dumber than the average American. Are you thinking what I’m thinking? Four more years! Four more years!...

A lot of people have been throwing around names like Louisiana’s Gov. Bobby Jindal, and former Hewlett-Packard CEO, Carly Fiorina, but I think these selections are completely in the wrong direction. The fact is the Republicans have such a good thing going with old, out-of-touch white men. Why change now? Even Mitt Romney doesn’t make the cut for me. For starters, he is waaaay too tan for a top Republican position. And although he's 61, he looks like he's 50. If you want to be an old, out-of-touch white man, you have to look the part.

I've got a wild-card VP candidate to throw out there: Strom Thurmond. Now, I know that there are some question marks surrounding him—like his problematic history of racism, or the fact that he died five years ago—but hear me out on this one. First of all, the corpse of Strom Thurmond would keep the conservative base happy. The added bonus is that it establishes the GOP as older and whiter than ever. He could help Sen. McCain on economic issues because Strom Thurmond was actually around when they changed the currency from seashells to gold. Additionally, a human corpse serving as the second in command would represent quite an historic change, and we all know that this is a “change election.”

I don’t think it will be a problem getting the American people to jump on board with this idea; after all, Weekend at Bernie’s grossed over $30 million at the box office. Furthermore, what’s the biggest criticism of McCain? He’s old. What could make John McCain look younger besides a decaying corpse standing next to him? I have no idea what else would do the trick.