If we live in fear, trembling for our country while justice sleeps, we will know this man is dead. 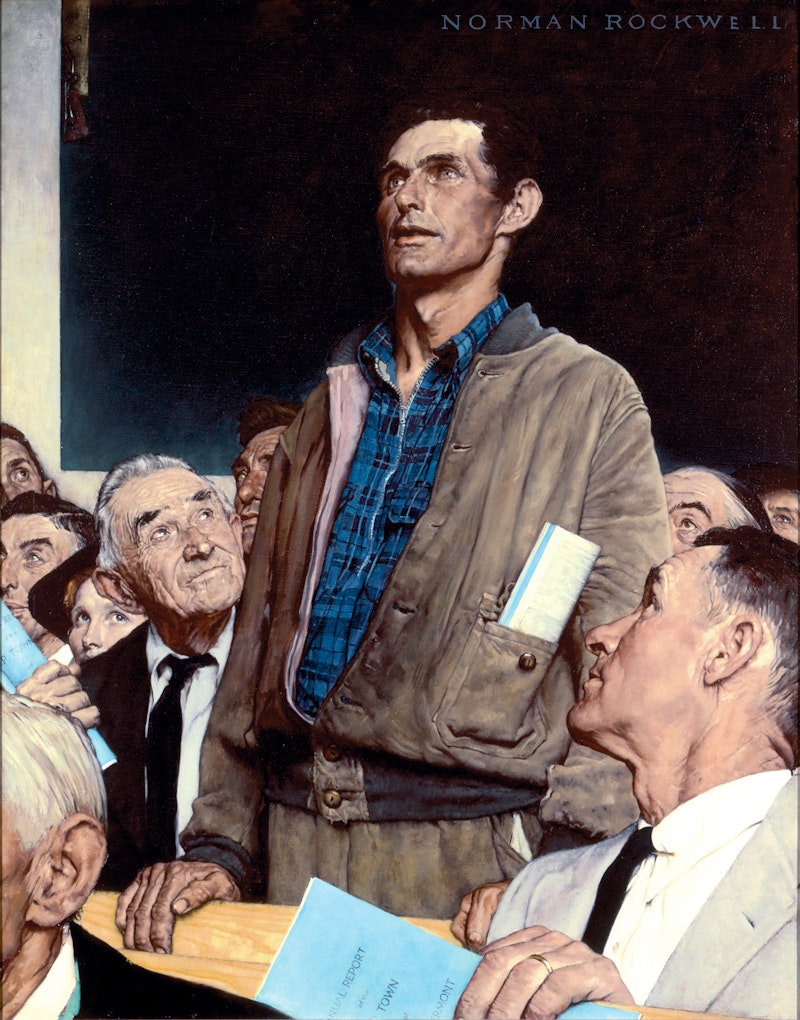 What Franklin D. Roosevelt said on the first Monday of 1941, The Saturday Evening Post celebrated during the last four weeks of winter in 1943. What survives the man is what lives in spite of the death of the magazine, four paintings by Norman Rockwell, in honor of Roosevelt’s Four Freedoms. The works hang as exhibits to see, not examples to emulate, because the fifth painting is more abstract than Rockwell’s take on modern art.

The fifth painting is the final word, free of words and images, and without Rockwell’s signature, on the nature of freedom; for we fear to speak the truth while we want, but dare not attempt, to hear the Word. The fifth painting is the one we hang ourselves, where the colors run as the freedoms fade, until the life of the nation hangs from the gallows.

What we do to save the first painting will determine if salvation is possible, because “Freedom of Speech” is the source of all other freedoms. Without this freedom, a nation is nothing; an island less than nothing; and Roosevelt Island an Easter Island between Manhattan and Queens, or a graveyard—a four-acre plot—facing the headquarters of the world’s worst ideas. Such is the view of the United Nations from the plaza of Franklin D. Roosevelt Four Freedoms Park.

The park turns wood to stone, going from rows of trees to blocks of granite, as a bust of FDR frames the view and dominates the space. The space is an empty room in which the writing on the wall—the inscription on the south-facing wall of the monument—is a runestone amidst the ruins of a smallpox hospital. The words are indecipherable to fools and incomprehensible to tyrants, because the words invoke freedom.

The words are faces in Rockwell’s portrait of America, and the faces of the most wanted fugitives in Merrick Garland’s vision for America.

The faces belong to a jury of nine men and one woman, with the foreman standing not in unanimity but dissent, all save the man standing in clothes befitting their appearance in court; the man standing how he looks, with firmness in the right that the Lord prefers common-looking people, because the man belongs to the ages. The man stands as a martyr of the fiery trial through which we pass, so our civil religion shall not perish from the earth. So stands the pillar of “Freedom of Speech.”

The man stands as the forefather of the men who built Four Freedoms Park, a forgotten man at the bottom of the economic pyramid, like the workmen who built the Egyptian pyramids. But the man stands tall, true to what he had prophesied: that the world can never forget what the brave did so the nation may live.

This man lives on in the hearts of his countrymen, through Norman Rockwell’s portrait of a town meeting.

If we live in fear, trembling for our country while justice sleeps, we will know this man is dead.

If we forget this man, we will know nothing.