Admit It Girls, We Owe Hillary

The undoubted sexism Hillary Clinton faced head on during her campaign may not make her any more deserving of the Presidency, but it does make the path easier for the next ambitious female politician. In a world where discrimination remains a force holding many women back, Hillary should at least be appreciated for cracking another glass ceiling. 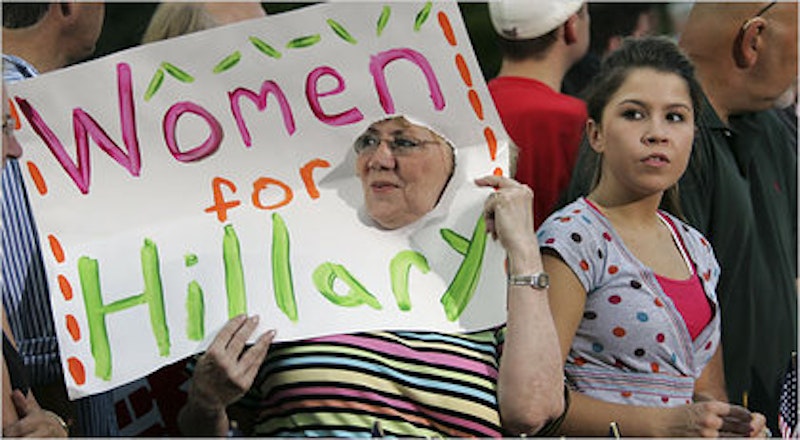 Ever since Edna Pontellier walked into the ocean off the coast of Louisiana in Kate Chopin's "The Awakening," feminism has been an exercise in treading water. But for young women of our generation - most of us who still cruise along in a boat between childhood and adulthood - staying afloat by our own means is not as much of an issue as it was even a decade ago. Gender issues rear their willful heads mainly when we let them. It's a gender-fulfilling prophecy: If a woman sees herself as equal to a man, she will be. The life choices we make more frequently reflect our interests rather than societal or gender-based expectations.

Young women owe Hillary. She walked into water and on top of it for us, and although she didn't win the nomination, she didn't succumb to the mighty undertow trying to drown her, either. Instead of hope, she espoused resilience, sacrifice and headstrong fearlessness. She came to lead the savvy, transitional generation of our mothers and grandmothers who have struggled against anti-feminist currents to raise us to do things other than stew at home with a can of Tab and the latest issue of People. But as exhibited by the vitriolic media treatment of Hillary and the stigma that came with supporting her candidacy, our forewomen still swim in choppy waters.

Just because she's been oppressed by the now-18-million-times-cracked glass ceiling doesn't mean Hillary Clinton deserved to be president. But in a country in which an accomplished, decorated politician is gleefully derided and an honest, hard-working career woman can still be denied a fair wage, we have a long way to travel. But in not giving credit where credit is due - to Hillary Clinton and beyond - we're our own biggest enemies.