A National Pasttime We Could Learn From

Hardly any country in the world is as bike friendly as The Netherlands, and the U.S. should be taking notes. From F News Magazine. 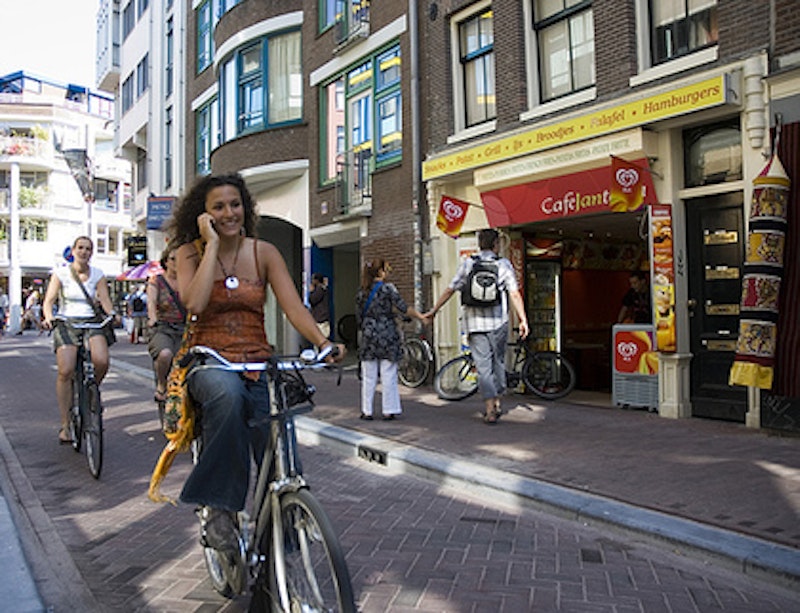 In moving to the United states from the Netherlands, one of the greatest challenges I faced was adjusting to new transportation standards. The cycling tradition in which I'd been raised has no real equivalent in Chicago, where almost all movement depends on the automobile. Bicycles seem to be something of an anomaly here, suffering minimal recognition and less than adequate accommodations, which, while not enough to keep me from riding, demanded a considerable change in tactics. To defend my presence on the streets, I was effectively forced to adopt an all-out guerrilla approach, which entailed sharper skills, constant vigilance, and occasional aggression. As thrilling as this renegade experience can sometimes be, I'm nonetheless exasperated by anti-bike attitudes here, and find myself wondering if Americans wouldn't do better to learn from the Dutch example.

Unfortunately, they've a long way to go. Biking has neither the appeal nor the respect that would merit equal status on the road (guaranteed in the Netherlands by such measures as designated lanes and bike-specific traffic lights), but even basic rights are pitifully lacking. These have been surrendered to the more powerful, more prevalent motorists, who (particularly in Chicago) boast their priority at almost every turn. If only out of negligence (though more likely out of contempt), drivers have been known to "nudge" cyclists if they exceed their few inches of shoulder; to veer in front of bicycles at intersections; and to fell riders by throwing open their car doors. With the threat of injury so high, who can really blame people for refusing to bike?

These risks are virtually nonexistent in the Netherlands, where an entrenched bicycle culture is preserved by infrastructure and legal support. The Dutch embrace cycling less as a recreational activity than as a form of sustainable transport, believing it to be the most efficient means of reaching their destination. Given the urban morphology of many towns and cities in the Netherlands, one's destination is usually less than 5 miles away, so every trip--to school, to work, to the market, to bars and restaurants, to neighboring cities--will typically be made on the bike.

This social pattern would hardly be possible, of course, without the long-term transportation planning and protective legislation that was introduced under Masterplan Fiets (Master Plan Bicycle) in 1990. Representing the first-ever national bike-advocacy campaign, this program was designed to promote cycling and discourage motor vehicle use throughout the Netherlands. Along with instituting more bike-friendly traffic measures, parking facilities, and navigational resources, Masterplan Fiets is also responsible for the country's vast network of municipal and trans- provincial bike paths, which, spanning a total of 13,670 miles, is considered the largest in the world.

Significantly, almost no one in the Netherlands wears a helmet while riding; this has less to do with any disregard for safety than with the understanding that it simply isn't necessary. Owing both to thoughtful road engineering and bike-conscious traffic policies, cyclists enjoy almost unlimited immunity on the streets. drivers are taught to be wary of these "vulnerable users" (against whom even small offenses can lead to staggering fines), but in a country where everyone has ridden a bike at some point or another, empathy is rarely an issue. Nevertheless, cyclists are expected to reciprocate: personal accountability is reinforced through extensive bike safety education that begins in infanthood on the seat of one's "mamfiets" (a bicycle equipped with one or more baby chairs) and continues through training in primary school. This mutual respect for protocol has produced an atmosphere in which cyclists are able to safely and peaceably share the road with motorists.

It's difficult to envision an adaptation of such a model in America--the fixation with cars and current road infrastructure is perhaps too ingrained to hope for a large-scale, popular bicycle movement. In spite of this reality, a handful of cities across the U.S. are beginning to take an active role in improving conditions for cyclists. Chicago's efforts have been especially noteworthy, with 115 miles of new bike lanes, 10,000 parking racks and, more recently, a set of ordinances that penalize reckless driving behavior. While I applaud these achievements, I think real change demands a fundamental shift in attitude. Eco- considerations aside (the environmental benefits are fairly obvious), too few people realize that it would actually be faster to bike than to take a car, that it's cheaper, that it allows for more freedom, and that more than one passenger can be accommodated. Arguably, the success of any bike program is dependent on widespread acceptance, which in turn necessitates awareness of the possibilities of this healthy alternative.

One of the most enduring barriers to cycling- culture transformation in the U.S. can be seen in the social and generational constraints on bike ownership. Being largely associated with the young and underprivileged, cycling would be unthinkable for anyone rich enough to afford a car, or old enough to complain about physical limitations. Traditional values and ageism are just as rife in the Netherlands, but this does not stop people as respectable as government ministers, as affluent as CEOs, or as esteemed as members of the royal family, from using a bike. Notably, in Holland cycling is also perceived as the most convenient means of getting around for the elderly, who often cycle (despite assumptions that we might make about the elderly being too old to exercise).

It would be inaccurate to attribute the Dutch enthusiasm for cycling to the flatness of the landscape or the density of habitable space alone. This custom was in large part generated by the OPEC oil embargo in the 1970s, before which bicycle use was slowly being eclipsed by the rising popularity of motor vehicles. Even after oil prices leveled, the Dutch resolved to avoid such surprises in the future, to limit their attachment to such a costly and unreliable form of transportation. I can only hope that the current oil crisis will elicit a similar response in the U.S.