A recent article puts the national spotlight on “Humans vs. Zombies,” where students all but prove the lack of seriousness at liberal arts colleges. 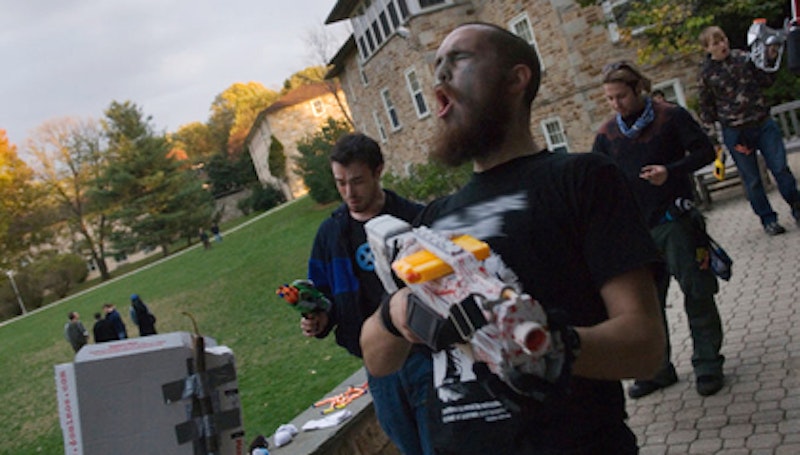 The Washington Post devoted 4300 words of its April 13 magazine to an article about “Humans vs. Zombies,” a small phenomenon that started at Baltimore’s Goucher College and has since spread to larger universities like Penn State and Cornell. (Read the article here.) The game is essentially a glorified version of tag—one player starts as the “Original Zombie” and the rest start as “humans” that get tagged and converted to the mock undead. The ranks of either side grow based on strategy and planning until one is declared a winner. Most people probably passed time in a similar way throughout their childhood.

But “H v. Z,” as it’s commonly abbreviated, isn’t meant as a pleasant way to spend a spring day. At Goucher, where the Post profile was set, the game includes 200 students, frequently lasts a week or more, and requires plenty of firepower in the form of Nerf guns. Max Temkin, a ringleader of Goucher’s human division and the main subject of the Post piece, was more than happy to exhibit all of his 10 Nerf weapons to reporter Laura Wexler. He pontificates about his “inner child” and the “weird kid” camaraderie that H v. Z promotes, unmoved by anyone who might feel threatened by roving packs of gun-toting students prowling their campus (wearing, in his own case, “steel-toed ‘zombie-stomping boots’”). He also never makes it clear why, of all days, Goucher students chose to start the spring 2008 H v. Z game on April 16, the one-year anniversary of the Virginia Tech shootings perpetrated by Seung Hui Cho, another nerd with a penchant for artillery.

No, Temkin didn’t address such things because a school shooting is a serious matter, and nerds of this intensity are incapable of confronting serious issues head-on. In the May 8, 2007 edition of The Quindecim, Goucher’s school paper, Temkin called H v. Z “a peculiarity that exists at Goucher that you couldn’t find at any other school.” Now that the game has been embraced by students at a dozen-odd other colleges, we can see its proponents for what they really are: kids who view college as a four-year playground.

These students exists at any school—hence the popularity of H v. Z at bigger campuses like the University of Maryland and Bowling Green State—but it’s telling that this game originated on a 1350-person campus like Goucher’s; something about the self-contained small communities of liberal arts colleges enables students to waste their time in such needlessly complicated ways. As a recent alumnus of such a school, I’ve seen that most undergraduate humanities majors were able obtain a GPA in the B range while doing barely any work. (The same can’t be said for science majors, it should be noted.) I have no idea what kind of work ethic Temkin and his cohorts have, nor do I know the average grades of H v. Z players, but they are familiar types insofar as the Post portrays them.

Their confidence suddenly boosted after leaving high school (and home), these proudly “weird” kids find themselves with a dearth of necessary schoolwork and a whole new audience to impress with their superficial quirks. Maybe they wear a funky hat or cut their hair into a Mohawk. Maybe they stop wearing shoes around campus or start throwing a Frisbee in obviously inappropriate spots. Or maybe they buy 10 Nerf guns and stop going to class, the better to focus on their 24-hour-a-day zombie fantasy. “[A] player’s life can be entirely consumed by the game” during H v. Z, writes Quindecim interviewer Asa Eisenhardt. The Post article abounds with descriptions of the participants’ months-long preparation, the time-consuming strategy involved, and, of course, the necessary hours spent convincing the administration that H v. Z is a legitimate way to spend time.

It’s not, and that’s what makes the participants “nerds” as opposed to plain-old dedicated students. Young people who attend to their classes and reading, or who campaign on campus for a social issue—these are examples of students who appreciate college for what is: four years with relatively little responsibility and commitment, where free time is yours to fill in productive ways. Alternatively, you can become Jonathan Suss, a Goucher freshman in the Post profile who tagged a key human by “waiting in the shower stall in the bathroom for eight hours.” Clearly the Goucher administration have this image in mind when they claim in their marketing materials that their students “engage the world as true global citizens.”

Of course, it’s the liberal arts academic mentality that allows this type of student to float by undeterred. Throughout my own experience, seminar instructors hardly ever told students they were wrong, and they instead opted for gentler retorts like, “Well, can you find any examples in the text?” The result is a nationwide army of students who know a few academic buzzwords and talking points, but who lack any kind of true intellectual seriousness. By and large, these students grew up expecting to go to college, viewing it more as a rite of passage than a privilege. When they show up and a thesis on Dave Eggers or Chuck Palahniuk is valued the same as one on Adam Smith or Aristotle, what could seem more mundane? This type of academia merely reinforces and bolsters a student’s existing personality by piling on jargon; I’m reminded of the time I sat in the cafeteria and heard a junior philosophy major unironically describe his squalid campus bedroom as “a Hobbesian state of nature.” Three years of philosophy classes and no one had sufficiently emphasized that Hobbes was concerned with man’s natural proclivity to conflict and war, not a bongwater stain on the carpet.

Put yourself in the position of such a young person: You arrive to college after years of being told you’ll be there, and you find that the student body isn’t much bigger (probably even smaller) than your high school, and much more socially forgiving. The institution “prides itself on encouraging students to be individuals” (Wexler’s description of Goucher), which in actuality means no one will ever tell you you’re wrong, even if you run around campus with fake firearms on the anniversary of a school shooting. You soon find a group of like-minded “individuals” and all realize that the barest minimum of academic work will secure you a B or C average. Possessing a small vocabulary’s worth of academic jargon, and with no impetus to interact with life outside a self-contained campus, you’re free to pass the time however your zombie-loving heart pleases. Suddenly you end up being profiled by The Washington Post, agreeing that your preposterously complicated version of tag provokes questions about “the balance of security and freedom.”

Again, this kind of attention-getting “quirkiness” no doubt happens in bigger schools, but it’s harder to get noticed in an environment like Bowling Green (undergraduate population: 29,000). Hence the events of April 8 at Alfred University (total student population: 2300), where an H v. Z participant was seen walking around campus with a large gun peeking out of his shirt. A frightened student justifiably called the college police, who instituted a campus-wide lockdown for over two hours. All this so a guy could take out a “zombie” with maximum efficiency.

“How has the Virginia Tech shooting affected me personally?” Temkin rhetorically asks Wexler. “It’s reduced my individual liberty as a student because of the reaction to it. I obviously think school shootings are a tragedy… But I just don’t see how they connect to our game of tag.” In other words, he sees no connection between gun-related violence on campuses and a weeks-long game that requires participants to carry realistic-looking toy guns, with some players dressed “all in black, wearing leg and shoulder holsters,” as Goucher student Sutton Ashby is described in the Post. And why would he see such a connection, when the administration refuses to call a fool a fool? Wexler quotes Goucher president Sanford Ungar’s comments from the recent alumni quarterly: “We will not seek to label as ‘dangerous’ every student who is merely different… We must make our decision with an eye toward striking a delicate balance between security and personal freedom.”

These students aren’t so “different,” though, as proven by the participation of 200 Goucher undergraduates in the game, far more than any official campus club. They’re just kids who don’t appreciate the opportunity they have to attend college, so they’ve turned it into a 287-acre playpen in which to act out adolescent games. Are they aware that only 35% of Americans get to attend college in the first place, or that the average total cost of a private institution is $25,200 a year? Tuitions keep rising so colleges can provide students with more opportunities and more luxurious campus settings, but too few people are asking whether or not it’s a good deal to pay thousands upon thousands of dollars so your kid can spend his time “killing zombies” for four years. In preparation for the recent games, Temkin claims to have read The Art of War. He must have skipped over one well-known piece of Sun Tzu’s advice: “Opportunities multiply as they are seized.”