The economy has caused a collective frightened shudder to pass through those Americans about to enter the work force. 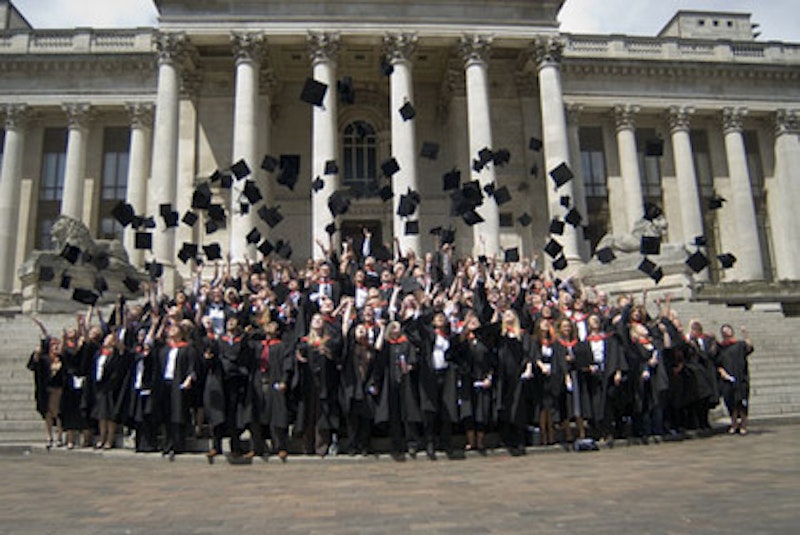 My friends and I joke about the quarter-life crisis, the period of one’s life where the fantasy college world is reaching an end and the bleak realities of finding a job, starting a family, getting an apartment and negotiating torrents of bills, paperwork, and taxes slowly take over. Until this point, young people spend their entire lives being told what to do. We are told which classes fill our major requirements and our life is run by a set schedule of classrooms and lecture times. We walk this road for approximately 22 years only to find that it ends in an open field, and it’s time to decide what to do now. If you’re lucky, you have it all mapped out by this point, but many do not, and with a job market as unreliable as the current one, more students than ever will take those diplomas and feel utterly confused.

We’re the doomed generation. America fucked us over and we’re scared. Even if someone is fortunate enough to land a job, he is constantly reminded that it might be temporary. Companies are going bankrupt. People are being laid off. Debts from student loans are crushing a graduate’s dream of making it on his own and more and more people are finding their futures in their parents’ basement.

As a college junior I’m lucky that I have another year to prepare, another year to hope that things will get better. My kick-in-the-ass moment came during at what should have been a pub happy hour. The conversation turned toward graduation, and our table went silent. I was sitting across from the nephew of one of America’s most powerful CEOs and he couldn’t find a job anywhere.

What are we going to do? As school comes to an end, students will simply refuse to leave. Graduate school is quickly becoming an escape from unemployment, a way to postpone dealing with the recession for a few more years. What’s sad is that this is most often not what the student wants to do. He wants to get out into the working world and start his whole life plan but he’s stuck in the classroom.

Employers don’t seem to be hesitant to remind the terrified masses of students of this fact. Over the past few months I’ve spoken with about 20 representatives from different companies in New York and Baltimore, and the words “not currently hiring” is the prevailing theme. At a career open house I attended in early January, several companies didn’t even bother to show up. They left signs reading “Place resumes in folder” and the dismayed students slipped theirs in and scurried nervously toward the employers that actually attended.

However, we’re lucky in the fact that our generation was forced to grow up early, and we’re aware of the challenges and troubles that face the world. When we were kids and should have been enjoying ourselves, we had to ask our parents why terrorists flew planes into the Twin Towers. Our first two presidents, who served as our introduction to government and politics, were characterized in popular culture as a narcissist and an outright moron. We had the Internet, giving us access to any information we could find, and social networking sites that taught us about the sex predators on our computer screens. We had school shootings, huffing, rainbow parties, and wrist-cutting before we hit high school. The apparent eradication of any forms of censorship led us to see the darker realities of the world with young eyes. And now we have a version of the Great Depression. But after we finish graduate school, break into the shattered job market and begin paying off debts, we will make up an extremely strong, dedicated work force because of these challenges.

After growing up in a period of history characterized by war, tragedy, and fear, we now have a president who offers us the emblem of “hope,” which to many people, seems like a new idea. The best that the doomed generation can do now is put a little faith in that promise while we wait for the nation to fix itself again.