Grad School: Like the "real world," only with more gossip and paid sabbaticals. 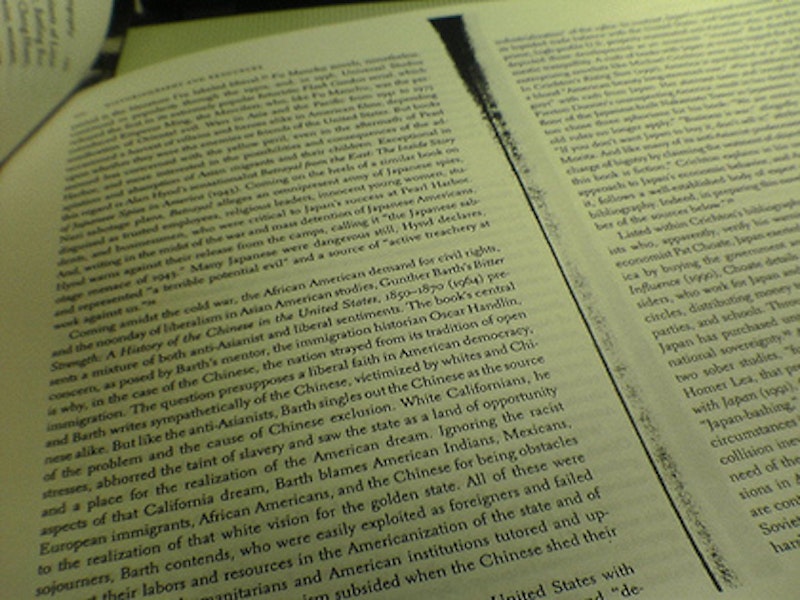 I know the economy is totally bananas right now, so much so that even the mail—known for its glacial service—might get its nuts cut out. But what really amuses me are all these bitches who say that they’re just Gonna Go to Grad School or something to avoid facing The Real World. I’m in the room five seconds before I hear somebody, anybody, say, “Yeah, I’m just gonna go to grad school.”

Oh yeah? Simmer down there, pup!

Most people who want to go to grad school don’t even know what grad school is. Hell, I’m in grad school and I still don’t know what’s going on. I mean, you’re sorta-kinda smart(ish). You did well in undergrad and you aced the GRE. So grad school should be a piece of cake, right?

The truth is, grad school isn’t about the one thing it seems to be about: class. Fooled you, huh? Grad school is really about going to job talks, professor talks and conferences. It’s about getting your seminar papers accepted to a fancy journal. It’s about being on committees and organizing panel discussions. It’s about getting over feeling inadequate or dumb next to that asshole who went to The Dalton School, Harvard, was a Rhodes Scholar at Oxford, won a Pulitzer, writes regular columns in The New York Times, and whose BFF is the acquisitions editor at Basic Books. Do not beat up the Asian bitch you have that seminar with—you know, the one you hate who uses words like “teleology” as often as possible.

I think grad school is fierce. But it’s also a place that comes with a lot of perks and negative side effects.

But I do get a little peeved at people’s research topics. Sometimes they can be so clichéd—like a Claire’s boutique. If I see another research project that looks at the intersections of “race, class, sexuality, gender, disability and nationality in ____,” I’m gonna punch somebody out. When there is a Department of Food Studies at every university, somebody shoot me.

Academics are lazy. We love to take leaves of absence and sabbaticals. I haven’t done any of that yet, but I do love having the summers off to do whatever I want. I’m so used to the year being broken up into two sections: nine months of school, three months of vaycay. And that’s the thing: if you go to grad school, you can get funding to do nearly anything in the summer. I got funding to live in the South of France for one summer. One of my BFFs, who shall remain nameless, got full summer funding to write a research paper. He worked on the paper a grand total of five days out of 100.

People always say that there’s no money in academia or in working as a professor. I guess that’s true if your greatest goal in life is to teach part-time at Washtenaw Community College forever. For years, the MacArthur Fellowship has surprised scholars the world over with $500,000 for doing innovative research. If your dissertation is sexy enough, Basic Books might give you a serious book deal, like it did for one of my colleagues. So I guess there’s no money in it if you’re content with being a traditional, uninteresting, below-average scholar. Which will get you fired, anyway. As in every industry, you gotta hustle!

But with every perk comes an equal and opposite side effect. The biggest one is that generally, academics don’t know how to communicate with other people. Not even socialites like myself. It’s a constant cock-block. Say you’re at a bar and you’re talking to this really delicious guy, and he’s just told you that he’s a lawyer.

The Lawyer: “Oh yeah? Where? What do you study?”

You: “I go to school ‘in Boston’ (because you don’t dare say Harvard). I’m getting a Ph.D. in the History of Consciousness”

The Lawyer: “Oh? What the hell is that?”

You: “I’m studying the relationship between cyborgs, food, sexuality and industrialization in the 19th century. I want to complicate the phenomenology of the heterosexual matrix, and it’s direct implications on Victorian notions of ‘The Self’ in order to understand how, and why, cyborgs, food and sexual mores have percolated throughout the American imagination.”

The worst thing a person can do is ask what a grad student/academic “works on,” lest they foam at the mouth for five minutes about the Ottoman empire.

People in grad school can be so ruthless, ready to fight for the star professor’s attention. I once had a seminar with an extremely famous professor, but I didn’t learn a thing because every week was like, “Okay, kidz, let’s play Who Has The Biggest Dick!” We’d read a Henry James novel and these bitches would just put their dicks right on the table. I don’t play that “Look How Smart I Am” game, so I just sat there and watched them trip all over themselves. I barely peeped a word the whole seminar, and I probably did better than all them hos.

Despite the ups and downs, the perks, the flaws, and the clichés, grad school is an awesome place to be. But don’t go because America’s economy is imploding. Go for the gossip!