Thank You For Teaching

We all respect teachers, but the position remains one of the country's most thankless. 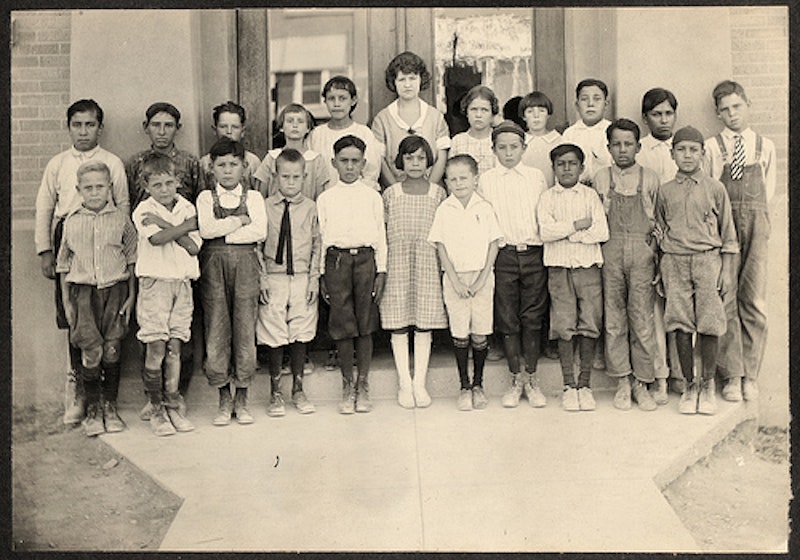 My friend abruptly stopped walking as we approached a street corner just outside of New Orleans’ French Quarter. It was the day before Mardi Gras and the sidewalks hummed with stumbling revelers, drinks-in-hand. Hints of live jazz made their way lazily from the banks of the Mississippi River a few blocks away. The friend, a Teach for America middle school teacher in New Orleans, turned to me and said, “That’s one of my students.”

Ahead were three kids, tap dancing for change. We gathered in front of the closest one, my friend’s student who we’ll call “Michael,” and clapped along as he danced for us. His torn and faded Nikes had little bits of metal seemingly dug in the middle of the shoe, flattening out into a device that jutted in front of the toe, looking like a combination of a gardening hoe and steel-tipped boots. As he got going, my friend cheered him on, “Yeah, Michael, yeah, looking great.” Michael smiled wide, revealing a chipped right front tooth, still not saying a word—just dancing. He looked about 13 years old. He was good, the rhythms from his shoes blending perfectly with the sounds of America’s most fun city. My friend tossed some cash in Michael’s hat and told him he’d see him in class.

Michael never spoke, but looked thrilled to see my friend. I had heard horror stories about my friend’s classroom, but this moment was a reminder of the impact a teacher can have on a life. When we were out of earshot, I asked my friend if Michael was one of his better students, one he was closest to.

I come across stories like this every now and then. I see them on the news, watch them in movies, television. I hear them from friends and acquaintances. But there is no substitute for seeing Michael in person, then finding out he was part of an armed robbery. And this is what my friend deals with every day. And I can’t possibly imagine how my brief encounter with a smiling boy compares to his daily reality.

My front right tooth is chipped, the same as Michael’s. They are actually both chipped at nearly the same angle, when I come to think about it. But you’d never know if you met me because the tooth was capped by a dentist so talented I sometimes forget which front tooth is real. There is nothing I can do about my good fortune other than be grateful. But there are people—like my friend—who are trying to turn Michael’s fortune around.

Teachers aren’t particularly controversial figures; they’re pretty much universally recognized as the good guys. I spoke to several other teachers while in New Orleans and listened to their stories. They spoke of small victories, trying to balance the tough hours and constant barrage of malicious insults with feelings of accomplishment and reminding themselves that they are doing something good. They were all intelligent, thoughtful, with a sense of justice, purpose, service, and especially humor.

My teachers, too, were like this, at least the ones I remember best. Without them, I would be someone else. Sometimes I underestimate their effect on me. My history major, my decision to go into journalism, my love of writing—I was not born with these decisions made, and when I look back, I can see a teacher smiling at me behind each decision. I will not name one because I would need to name so many, but they should know what they’ve meant.

Teaching is becoming an increasingly high-profile position, but for a moment, I want to keep it simple and thank them, and I hope you do, too. Every teacher should be granted a reminder of why they do what they do, a candle in what can sometimes be a dark place.

This week, my friend was trying to elicit a story from his English class about a fictional worst birthday party ever. No one seemed enthused until one student mentioned that it was the worst birthday party ever because my friend, their teacher, showed up. That got the class going, and soon they had a whole list of ways that teacher ruined the party: he stunk, he was uninvited, and he wore a silly polo shirt. They then wrote full-page stories on their own about my friend’s incredible ability to ruin a party. “But it was a victory for me in the end,” he told me. “Because they wrote.”