Sometimes You Embarrass Your Kid Just By Existing 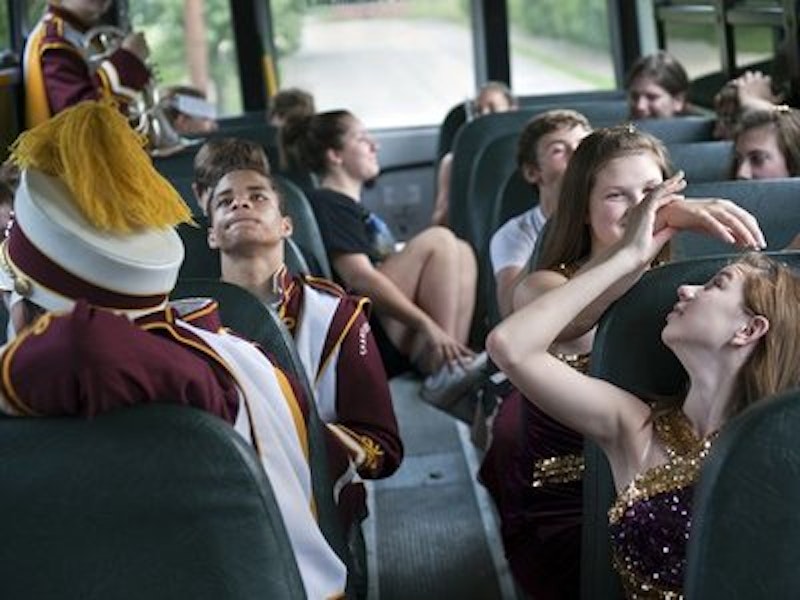 I agreed to chaperone the high school marching band field trip the same way I do most things in parenting four kids: out of guilt. My ninth-grade daughter is one of two middle girls who are constantly giving me snide mom-guilt comments about not doing enough for them, and I did genuinely see the trip as a chance to hang out with her. In parenting you can be a work-at-home mom who manages, leads, volunteers, coaches, chaperones, etc. as many of their activities as you can and it won’t matter because they will roll their eyes and act like they’re neglected orphans anyway. Field trips, I’ve found, are a good way to spend time individually with my kids to cut down on the whining they’ll have to do to their therapists about the passive neglect in their childhoods.

One of the most fun things about parenthood is embarrassing your kids. With teens, however, it can be dangerous, as I’m pretty sure I’d have gotten murdered if I’d done anything on the band bus to embarrass her. I was basically not allowed to speak. Even when I put on headphones to drown out the loud singing, she said my headphones were too loud and needed to be turned down. I had to ask her permission to speak to the dorks behind me who said it would be cool if there were a book where everyone lives inside a video game. They needed to know about Ernest Cline’s Ready Player One—she gave me a pass for the book recommendation. Helping the singing girls fill in the words to “Do Re Mi” from The Sound of Music when they forgot some was frowned upon.

I actually enjoyed turning my headphones down so that it seemed like I was listening to Air Supply but really I was listening to the conversation of the adorkable band geeks around me. The boys talked about gaming. A lot. Have you read the reviews of the new World of Warcraft game? I can’t believe Sims expects us to pay ridiculous amount of money for that game and then have to pay for things inside the game. I had to Google “AFK” which they thought was awesome on a bumper sticker. It means “Away From Keyboard.”

I had Slim Jims on the bus, because I usually have them everywhere. A skinny kid mentioned being hungry and I offered him one (earning an embarrassed glare from my teen). “I’ve never seen one,” he said. He and some other band members passed the Slim Jim around, as though it were an object from a faraway planet, examining the ingredients (which I tried to explain to them that you should never do) and the kids, clearly raised on organic, gluten-free-range, food-dye free diets, noted that there were “more than five ingredients on the package.” The unopened Slim Jim was returned to me as if it was radioactive and may at any moment explode and destroy Earth. They referred to the Old Country Buffet restaurant where we were headed for dinner as a “human trough.”

I did notice later at the hotel upon delivering a bag of snacks to the girls’ group I was in charge of, that the apples were appreciated but the box of mini Nilla wafers, jar of Nutella, and tube of squeezable Cinnabon icing were promptly and enthusiastically devoured. Apparently a few hours away from chemical-free diets at home was enough, especially with Cotton Candy, Fried Kit Kats and Reese’s Peanut Butter Cup funnel cakes in their future at Hershey Park the next day.

When the band director collected the chaperones and began to explain to us how we would use tape to seal the kids into the hotel rooms, at first I was concerned. But based on some of the behavior I’d observed in the bus, I did agree that teens leaving rooms to sneak to other teens’ rooms was a valid concern and I sure as hell hadn’t packed condoms to distribute with the pretzels, so I listened and did what I was told. At 11 p.m., a masking tape "security seal" would be placed across doorjambs. This didn’t prohibit teens from exiting rooms, but it certainly prohibited them from re-entering a room without leaving evidence. The kids all knew about the tape program, which to me suggested they’d probably found a workaround for it. The other parents swore it was foolproof. Sure enough, all tape was in place each morning, so unless they dangled themselves along window ledges to evade security seals, I guess they stayed in their rooms.

It was fun. I rode roller coasters, which I am too old for; they gave me a slamming headache and will necessitate an extra visit to the chiropractor this week. Worth it anyway. I found a band geek mom friend. I played Whack-a-Mole, ate a Reese’s Cup Smore, and almost got sick on the Tilt-a-Whirl, which reminded me why everyone calls it the Tilt-a-Hurl. Our kids’ team won first place in the marching band competition and best of all, I got to hang out with a teenager who so quickly will graduate and disappear, no longer worried about being embarrassed.