The Crossroads of Gender Politics and Social Progress

Phi Alpha Tau's campaign to assist a transgendered student is controversial in the gay community. 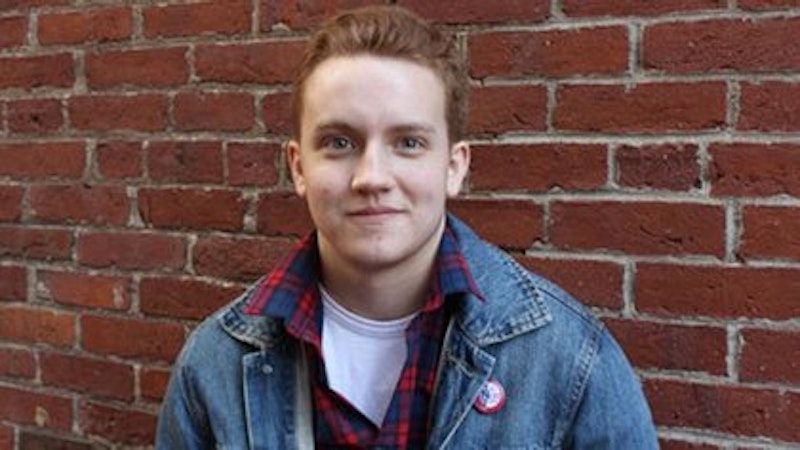 Donnie Collins is a trans-gendered college student who identifies as male and is preparing to undergo gender re-assignment procedures. He is also an active member of a fraternity—the Phi Alpha Tau chapter at Boston's Emerson College. What makes Collins truly unusual is the fact that a portion of his top surgery (the removal of his breasts) has been paid for through fundraising done by his frat since initially his health insurance company claimed that they couldn't cover the procedure. When news agencies across the world picked up on this story back in February it became a sensation. This prompted Collins and crew to retreat from the resulting deluge of press attention that descended upon them; as of March, they've officially declined all further interview requests.


Though Phi Alpha Tau's campaign to assist Collins received a generous outpouring of support from trans advocates of all shades, the backlash against them has been just as strong with the most negative reactions coming from the lesbian community, radical feminists, and the Christian right. While it's easy to explain the support for Collins, it's not nearly as easy to contextualize the arguments against his decisions. Nonetheless, the varied opinions on this unprecedented fraternal milieu deserve special attention as these combine to reflect a panoramic view of Collins' controversial place at the crossroads of gender politics and social progress.

Cathy Brennan is a 42-year-old lawyer and a mutual acquaintance of mine who lives and works in Baltimore, MD. She writes and edits for www.bugbrennan.com, a radical feminist website that features her musings on gay rights, patriarchy, male violence, and everything in between. When I asked Cathy Brennan to summarize why she and many of her political allies are uneasy with Collins and Phi Alpha Tau, she provided a lengthy, well-thought-out explanation:

With regard to Donnie Collins, I quote radical feminist blogger Undercover Punk, "I-dentity (aka trans) politics... essentializes sex stereotypes by renaming them consensual ‘gender identities.’ It invisibilizes power structures that give rise to female oppression... Cosmetic surgery to mutilate healthy female bodies and render them into the stereotypical approximation of 'a man' is misogynistic.

Within this context, Collins becomes the enemy of feminism by opportunistically altering his gender in order to benefit from a patriarchal system where, in Brennan's words, "...males are socialized to expect that everyone will credit their opinions and that they are eminently qualified for any task..."

Brennan and her supporters also believe that the mainstream GLBT community's financial and moral support of Collins constitutes a misuse of time and resources. To her, the gay community especially can only benefit from insularity when it comes to their work advocating for civil rights legislation and female equality; Brennan continues: "...What I am suggesting... is that we as a Gay Movement and we as Lesbians in particular might be wise to think not only about the causes we take up as our own, but the people who ask us to lift a laboring oar for a cause that does not necessarily inure to our benefit..." Of all Brennan's arguments against the widespread support of Collins, this latter point is the one where she comes across most convincingly. The past has shown that every major civil rights success has been spearheaded by the cohesive leadership of a single minority group. The Montgomery Alabama Bus Boycott, the Stonewall Riots, the fall of apartheid, these were all turning points born from a shared experience of oppression which served to foster the kind of passionate solidarity that has annihilated injustice time and time again.

Though she holds a valid point in regard to the power of insularity in the Gay Rights Movement, Brennan's assertion that Collins is a by-product of misogyny is questionable for as an individual his choices could be motivated by many things, not just a desire to lead a “easier life” in a male dominated world.

When it comes to the criticism of alternative lifestyles, no group’s more outspoken than the Christian right. Contrary to the radical feminist agenda of Cathy Brennan, gender politics aren't even an afterthought for these folks. Ultimately, with the Christian right, it all comes down to God's plan. The conservative website gotquestions.org makes no bones about who should determine gender: "Although sex-change operations are not specifically mentioned in (the Bible), human sexuality is spelled out clearly, starting in Genesis: "So God created people in his own image; God patterned them after himself..." (Genesis 1:27-28a)... Verse 31 tells us that His creation was excellent in every way. To say that a sex change is okay is to say that when God created a certain individual, He made a mistake..." Tampering with God's "excellent" work absolutely epitomizes blasphemy, so, in the eyes of conservative Christians, Donnie Collins and his frat are nothing less than sinful heathens.

Conversely, 36-year old Devin Hellfire's sentiments exemplify the positive reaction to the Collins story. Hellfire works as a stage performer, visual artist, and poet in his hometown of Baltimore. When asked for his opinion on the effort of Collins and Phi Alpha Tau he simply replied, "It's a very good thing. All communities should be supportive in helping one another...," while his overall opinion of the trans-gendered was expressed with a philosophical, almost mystical sense of respect: "[The trans-gendered] are amazing, strong, intelligent, and an asset to any community. Much how Native Americans held ‘Two Spirit’ people in reverence as Shamans and healers, our culture needs to do the same [for the trans-gendered]. Instead our culture abuses and oppresses its ‘Two Spirit’ people and as a result our culture is seriously degenerating and in need of healing. I believe that Trans people can bring balance and healing to our society if we stop hurting them."

Despite his visionary sweep, for this writer, Hellfire's statements make perfect sense. I mean, when has the act of alienating someone due to his or her sexuality ever resulted in any positive consequence? I'd say never, and it seems like Phi Alpha Tau would agree with me too.

However you may feel about Collins and Phi Alpha Tau, one thing is certain: they share a distinction that is entirely the bi-product of their fraternal camaraderie. Without representing a side in some pre-existing political conflict and without the approval of an established moral majority, the benefit of Phi Alpha Tau's non-judgmental support has given Donnie Collins the chance to set a course for his own destiny as a man. This act has transformed the relationship of Collins and his frat into a force uniquely born of tolerance and friendship.