What will come of the increasing lack of privacy in our digital age? 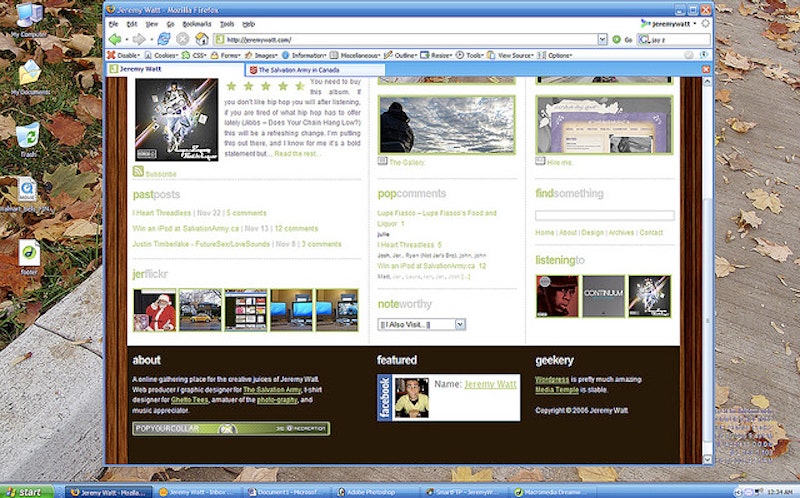 On one of the first nights of my college career the school administration gathered the freshman student body into the campus auditorium for a presentation on social media and how it was going to ruin all of our lives. In 2006, Facebook was still in its infancy and limited to a population of high school and college students. Most of us had just discovered the site and had maybe managed to upload a few pictures from our senior proms, but at that point we didn’t really have a grasp of the full implications of publishing our personal information on the internet.

In this presentation, they showed us pictures of college students drinking at parties, doing drugs, and dancing on stripper poles which seemed to do nothing more than make the crowd slightly more excited about what was in store for the next four years. We may have been concerned for a moment, but after an hour or so they let us loose and most of us went out drinking at frat parties.

In 2010, with that chapter of my life having come to a close, I find it strange that I am still constantly reminded of the message from that ineffective presentation. In a recent interview with the Wall Street Journal, Google CEO Eric Schmidt said, “I don’t believe society understands what happens when everything is available, knowable and recorded by everyone all the time.” He then goes on to predict that young people will eventually earn the right to change their name upon reaching a certain age and theoretically wipe the slate clean to escape whatever photographed keg stand or beer bong could potentially keep them from landing that first job out of college.

It is understandable that Schmidt views this as a necessary next step since he grew up in a time when he didn’t have to worry about his personal life becoming public. In the 1970s, when Schmidt was beginning his career, exploitation was reserved for the paparazzi and kids could be kids. But what he doesn’t seem to understand is that American culture is changing, and kids will be kids no matter who is watching. If everyone is subject to having their personal information recorded on the internet, young adults aren’t going to change the way they act, they’re going to change the rules to the game.

In the wake of the economic recession, thousands of college graduates remain unemployed. Many decide to move back home and find work close to where they grew up. Many more pursue graduate education or temporary endeavors such as Teach for America to pad their resume and kill some time until more jobs become available. But the group of recent graduates that will be most important in the coming years are not the ones currently climbing the traditional corporate ladders worrying about their records and resumes, but those who will create something new and capitalize on the resources available to them at their keyboards.

Biz Stone, Mark Zuckerberg, and Tom Anderson are all under 40 years old and they have revolutionized the way people communicate with one another. They are the founding fathers of an industry that has only begun to grow. They know the social implications of what they created and they probably don’t care what their employees have published online. If they did, it would go against the free information ethos of their projects. The next guy won’t care either.

We are in a transitional period, and in time the old order will phase out and a new method of business and communication will emerge, where information is valued, not hidden. People will not try to escape from their published pasts by changing their names or attempting to delete all they can; they will accept the fact that their lives are catalogued in an online canon and their contemporaries won’t care because theirs are too. In a recent article on Splice Today, Russ Smith said:

I fully expect that the near future holds the promise of private industry sectors not imagined today; that the next group of leaders in finance, the arts, science and technology will carve out a new version of America, and the innovation and excitement, particularly after a prolonged period of economic and social unease, will be invigorating and momentous.
This statement presents an uncharacteristically optimistic vision of the uncertain future America is facing. Instead of narrowing in on the lost and jobless youth, Smith envisions what they are capable of. He focuses on innovation over unemployment; progress rather than stagnation. As new ideas and industries emerge, it seems foolish to assume that the new generation of pioneers will remain bound by the social constraints of the old order. Smith appears to have faith in the direction we’re heading, which should be a refreshing change of pace to any recent grad reading his article from his parents’ basement.

A particularly amusing New York Times Magazine feature called “What is it about 20-somethings?” seems to track this cultural phenomenon with a hint of paranoia. In a recent edition, Robin Marantz Henig says:

The traditional cycle seems to have gone off course, as young people remain untethered to romantic partners or to permanent homes, going back to school for lack of better options, traveling, avoiding commitments, competing ferociously for unpaid internships or temporary (and often grueling) Teach for America jobs, forestalling the beginning of adult life.
This commentary is all from the perspective of the culture that came before the one that is starting to take control. By focusing on the present instead of the future, the analysis is bound to be laced with a hint of pessimism. To Henig I can only say, don’t worry. We got this shit under control.

The primary flaw in Eric Schmidt’s vision is how he believes this next generation will interact with new technology. In the same WSJ interview, Schmidt says, “I actually think most people don’t want Google to answer their questions. They want Google to tell them what they should be doing next.” He assumes that his technology will change the way Americans live, the way our culture operates, but he doesn’t take into account the fact that American culture is changing dramatically without his help. He assumes that people will remain passive to the giant he’s created rather than building upon it and pushing the phenomenon forward. Despite what he may believe, the reins of his revolution will not be in his hands for long.

In the process of writing this article I have used Google, Wikipedia, several online publications, YouTube, Facebook, Twitter, and MySpace and haven’t once picked up a pen or sheet of paper.