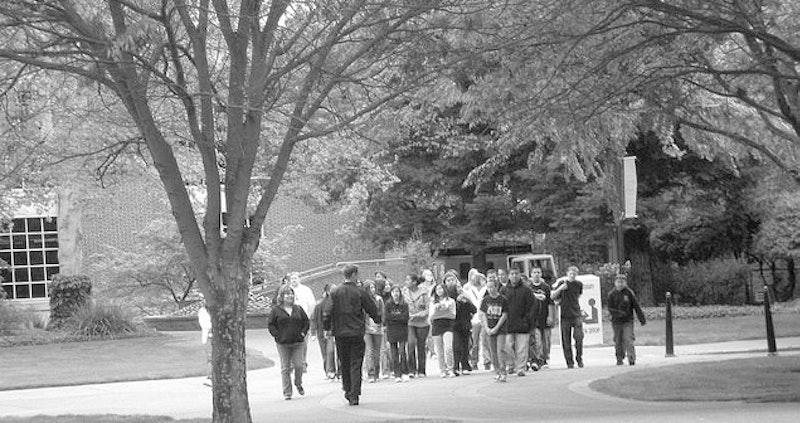 As much as it blows my mind, I’m about to start my senior year of high school, and with that, plunging full bore into the “college process,” the end goal of years of academic toiling in subjects I couldn’t care less about. In just about a year, I’ll be off to wherever I go, as my dad says, “cleansed” and ready to begin a distinct phase of life. Whoa. Since March, I’ve visited five schools, and luckily have pretty much made up my mind on a favorite. It feels great, and I don’t envy those of my friends who still have no idea of what they want or where they want to go.

In traversing all these tours, information sessions, brochures, packets and so on, it’s become clear that those friends are the majority. Most kids don’t know what they want to study or what they want to do. So much of the “college process” that my high school has pushed over the last three years has been about finding what you want. I know what I’ve wanted to study since I was about 10, so I don’t quite feel any panic or frenzy.

But visiting can be fun. Only one tour has really impressed me so far, but even the more general, larger sessions are great if only for the people. Both large universities I’ve visited were filled with what my dad referred to as “the dregs of society.” That made me laugh, but it felt more like these were kids who were lost, unsure of what kind of college they wanted or even if they were interested in college at all. These huge sessions are often out-of-control boring because the speakers have to cover all the talking points and general basics of such a large school. It’s only the smaller tours that can yield some entertainment—I remember back in March, on a small tour of an urban art school, a girl who would fit right in at Baltimore’s Maryland Institute College of Art asked what the party scene is like, much to the chagrin of her accompanying parents. Similarly, a girl on another small tour asked about what the city nightlife is like—followed by her father asking when the dorms shut down (they don’t, and he was pissed).

So far, this process isn’t nearly as intense as advertised. Now, the real crunch is coming up this fall, and I may eat these words, but I feel confident about what I want to do and where I’m going.