Despite what Mr. Rogers and my family said, elementary school proved that I wasn’t special. 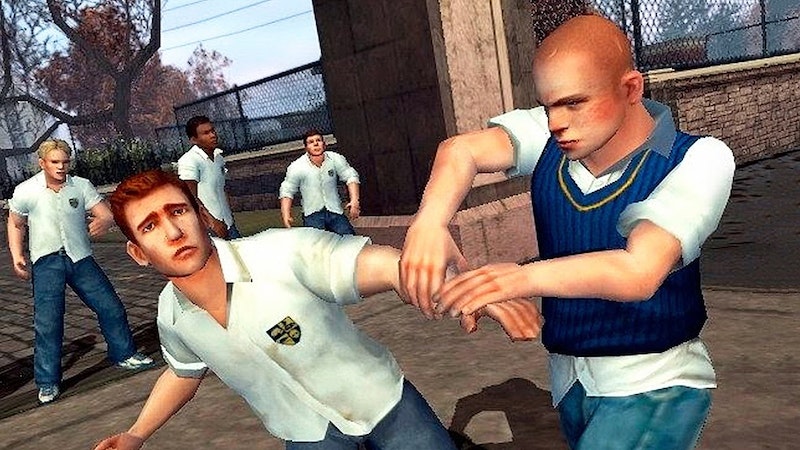 I first met Jake Vernon in first grade. He was a scrawny kid with a bad bowl haircut, and his face looked like a cross between Pee Wee Herman and a weasel. Grandma knew Jake’s family well enough to describe the Vernons as “the goofiest damn bunch,” which meant his family was more dysfunctional than ours. Nevertheless, I tried to befriend Jake as much as any other classmate. He had other ideas, though; one look was enough to convince him that whatever was going on in his head, I was the perfect outlet for it.

His method of attack varied depending on his mood. Sometimes during recess, I’d be running around the playground when suddenly a nasally screech of a voice made my body freeze. “Hey, buddy.” I turned around to find Jake standing behind me. His eyes narrowed as they focused on mine. His lips curled into a snarl.

“I’m going to get you.” His face got closer to mine.

“I said leave me alone.” Pressure quickly built inside, readying me to either fight or flee.

“You better be scared,” By this point, his lips were so close to my ears he could lick them. “You’re dead meat.”

“Get away from me!” I screamed loud enough for everyone to hear. All the other kids quickly circled around pointing and laughing. I felt trapped. I tried to make everyone go away by crying, hitting myself in the head, and screaming, but that brought more laughter. The teacher came over to find out what was going on. Jake said I started screaming for no reason.

One day Jake asked for my phone number. I knew it was a mistake, but gave it to him anyway, thinking that maybe he did want to be friends. Later, when we were both home, the phone rang. It was Jake. He started screeching so loud that my ears hurt. I slammed down the phone, but it started ringing again. Once again it was Jake, still screeching. This happened four more times until finally Mom answered on the fifth ring and told Jake to leave me alone. He never called again.

Jake did most of the bullying, but there were plenty of other kids who wanted in on the action. Once they saw how little it took to spark a meltdown, it became a game to them of who’d be the first to make me lose my shit. They never went after anyone else, though, because I was the only one who gave them what they wanted. School offered no help. The teachers always responded to my meltdowns by yelling, “Stop being a baby!”

I don’t remember how frequently this happened, but it was enough to implant the idea in my still-developing mind that something was wrong with me as a person. My predetermined role in society was the Outsider. The Misfit. The Other. Despite what Mr. Rogers and my family said, elementary school proved that I wasn’t special.

I frequently came home from school crying and telling Mom I hated myself. Grandma said to fight back, but my wrist went limp every time I tried to punch someone, which made the bullies laugh more. Yet violence still boiled up inside of me. I wanted to make people hurt the way they hurt me. The things I took my violence out on, though, didn’t deserve it. A meltdown at home triggered by the slightest inconvenience led to me either punching Mom in the shoulder or throwing a toy to the ground, watching it smash into tiny pieces. Counting to 10 didn’t help; I had to release all the anger through rage. Eventually I took out all the violence on myself.

I tried to kill myself in sixth grade. During recess, I looked up at a six-foot-tall monkey bar structure and thought, “If I jump off, maybe it will all end.” I climbed up to the top, carefully stood up straight on the top bar, and then jumped. A sharp pain shot up from my ankle. “I broke my ankle,” I cried, “I broke my ankle!” Two kids picked me up by my arms and carried me to the health room. The nurse said I just twisted my ankle. Despite surviving this pathetic excuse for a suicide attempt—I learned later that six feet is only tall if you’re a sixth grader—I wished I had been more successful when the principal called Mom.

Mom couldn’t stop crying that night. She followed me throughout the house, even when I was taking a shower. “I don’t want to lose my baby,” she kept saying. I cried as well, knowing I broke her heart. “We need to get you help,” Mom sobbed. I agreed. I started seeing Mary, my first therapist, that summer.

Everything about Mary reminded me of a sweet grandmother, from her short gray hair to a soft, soothing voice. She had one of those “Hang in there” posters, the one with the cat hanging onto a clothesline for dear life, on her wall. A small white noise machine hummed outside her door so people walking by couldn’t hear anything. Despite all the maternal concern and comfortable surroundings, though, we never clicked. Her perplexed look suggested that this was the first time she’d met a suicidal 12-year-old. She gave me some advice, but it was all just talk.

My final confrontation with Jake happened in seventh grade home economics. It started with Jake teasing me about something, which led to me trying to push back against him by screaming and crying hysterically, which led to me threatening to slit my wrist with a fruit peeler, which led to Jake accusing me of deliberately putting the peeler inside a microwave, which led to… I don’t remember. I might’ve thrown a chair at him. Whatever happened next, the school principal was called in, and Jake and I were sent to peer mediation.

Our mediators tried their best to defuse the conflict, but every time I tried to speak, Jake interrupted. “He’s crazy,” he said. “He goes off for no reason at all.”

“No, it’s you,” I said defensively. “You’re the one who’s always starting everything.” The mediators then spoke up and told me to calm down. Always when it was my turn to speak. At the end we came to an agreement: if I attacked Jake again, I’d be suspended. They didn't say anything to Jake.

The threat of suspension worked because I calmed down a bit after that. The rest of seventh grade went by without much happening. I stopped seeing Mary, and when eighth grade began Jake was no longer part of my life. We didn’t have any classes together, and he ignored me during lunch. It was as if he’d completely forgotten about me.