NYC doesn't care about teachers who were once called heroes. 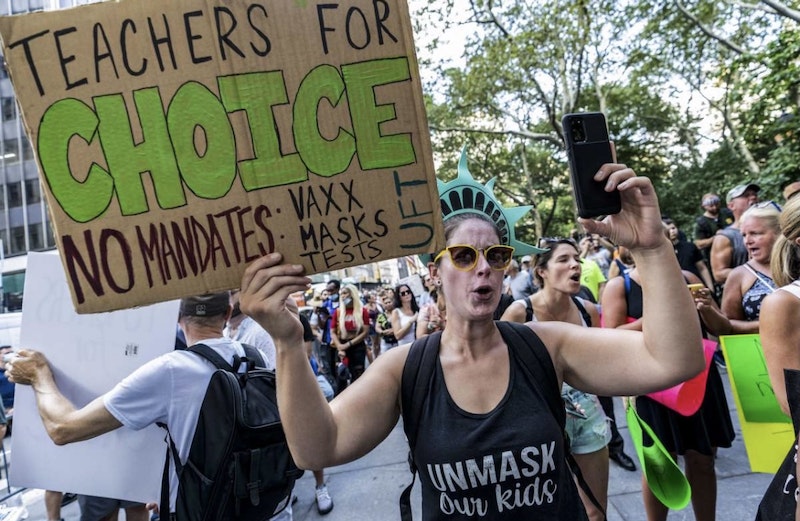 As I examine the latest correspondence from the New York City Department of Education (NYCDOE) and United Federation of Teachers (UFT) reminding me that I’m now on unpaid leave, prohibited from contacting students or parents, forbidden from seeking out any other form of employment or filing for unemployment, told that if I attempt to enter my school building I’ll be escorted out by administrators and school safety, I think, “These bastards really don’t give a shit.”

They don’t care about the kids who pour their hearts out to their teachers every day, crying in our arms about anxiety, problems at home, not having food on the table. They scoff at the teachers who’ve spent endless hours preparing lesson plans, spending thousands of dollars for supplies that the schools don’t provide, worrying if in today’s violent world, they’ll ever see their kids again.

They’ve turned a blind eye to the fact that there’s now a school safety agent shortage; in just the last few weeks, numerous students were stabbed outside their NYC public schools.They’re unfazed that our children, most of whom rely on school meals as their only source of nourishment, have now lost many of the food service workers who provide them with this daily necessity—people who continued to work through the pandemic while the mayor and DOE were credited with feeding not just the students, but any New Yorker who was hungry.

They don’t care about those who were once called heroes. There’s only one thing that matters to them: the Vaccine. When the COVID-19 vaccine mandates came out for NYCDOE employees, it was said we’d have the option of testing weekly should we choose not to vaccinate. This was a middle ground that allowed for personal choice—the same choice that other New York State schools and NYC employees were entitled to. However, that option was ripped away with the blessing of our union, and before anyone had time to prepare, we were coldly told to vaccinate or get out, even though this had never before been a previous condition of our employment, and no other current NYC municipal workers received the same ultimatum.

I watched in horror as friends and colleagues turned into enemies. I witnessed educators bashing one another in social media groups, proclaiming that those who chose not to vaccinate were selfish, evil, and deserved to die. A wedge was being driven—the division was apparent. We weren’t heroes and no longer united.

Despite our union telling us repeatedly that we needed to stand together, they callously sided with those who praised these mandates. They deemed us unfit to educate, hounded us with vaccine propaganda, told us it was our duty to keep the children safe, viciously guilted and coerced us. We were bombarded with countless emails, social media posts, and advertisements proclaiming that should we not vaccinate, we’re not doing our part to end this cycle. “It’s a pandemic of the unvaccinated,” they professed, as we witnessed a surge of countless breakthrough cases among our colleagues. Our students were quarantined in droves. We had to extend office hours, build new Google classrooms, pander to the government and the “new normal.”

It was a slap in the face. As lawsuits made their way into the media, the UFT “graciously” “fought” for us in arbitration. They were overcome with excitement to announce that we now had a variety of options should we choose not to vaccinate:

—Go on unpaid leave. They will hold our jobs and allow us to keep our health insurance until November 30, 2021 at which time we have to decide if we want to extend that leave or resign. If we choose to extend, we can keep our benefits until September 5, 2022 and come back at any time before that if we show proof of vaccination or if the mandate’s lifted. We can’t use any of our accrued paid time off while on leave. We also have to sign something “waiving our rights to challenge the involuntary resignation, including, but not limited to, through a contractual or statutory disciplinary process.” If they’re in the right, what are they so scared of? During this time, we’re not allowed any other form of employment (many believe this includes holding another job outside of school hours, which a lot of us already do) nor can we file for unemployment. Apparently, allowing your employees and their families to starve is much more humane than permitting weekly testing. If we make no decision, we’ll be terminated on December 1, 2021 and lose everything.

—Take severance. I use this term very lightly. We have to make this decision by October 29, 2021. If we accept this, we resign and will be paid out our accrued paid time off. We can also keep our health insurance for the year as long as we have no other options for it. That’s it. No monetary compensation. Just the ability to reapply to the DOE in the future should we meet their criteria. Again, we must waive our rights to challenge the involuntary resignation.

—Apply for a medical or religious exemption. Over 3000 people applied. They approved about 600 combined, most of which were temporary medical exemptions for people who recently had COVID or received certain types of treatment. These only last a handful of days to about three months. Very few people received religious exemptions—the mayor said that because many religious officials believe in the vaccine, only those organized religions with known documented objections, such as Christian Scientists, would be seriously considered. The majority of us received nothing but a sheet of paper reading “denied” and signed by an arbitrator who is a known fundraiser for Mayor Bill DeBlasio. Gov. Kathy Hochul has proclaimed that God wants us to be vaccinated and has asked people to be her “apostles” to help show us the light. Religion has found its way into their agenda.

The details are fuzzy. Our questions are being met with varying answers. We’re sure that clarity is the last thing we can expect. The truth is that all of their options are immoral and the legality is questionable. However, our “new normal” has brought with it a new set of laws. The Constitution, like the American flag, has become a sign of treason.

Disgusted. How will we go on not being allowed to work or collect unemployment? Many can’t, so they give in. They're already talking about booster shots for educators. They've entered an endless cycle of medical tyranny. So, many have decided to leave the state. But how long can we run? How long will it be until the majority wakes up and sees what is happening, what’s really at stake?

This goes beyond a vaccine. Once they see that people will do anything out of fear and a desire for “security,” there will be no turning back. The ones who’ll suffer the most are those that they swear they are “protecting.” They’re using our children as pawns to turn people against one another. And it’s working.

—Cassie Morgan is the pseudonym of a tenured NYC public schools English teacher.