Enumerating the Barrier to Entry

Is the culture of standardized testing ready to change? 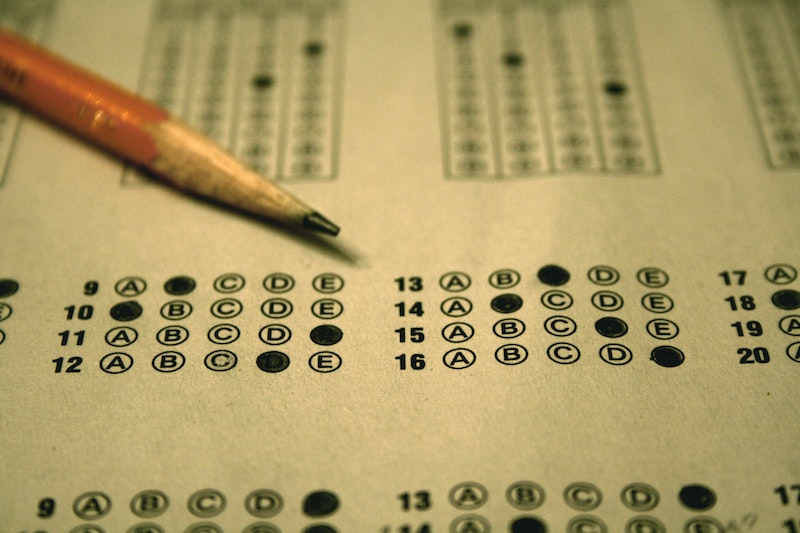 This week, DePaul University in Chicago announced that it would nix the ACT and the SAT as a requirement for admission to their undergraduate program. Hear that, slackers? Now you can keep on coasting through high school and still end up in a real college just like everybody else! With the announcement, DePaul becomes the largest private university in the country that doesn’t require standardized test scores to get in. This is a trend I’d like to see more of, one American high school students really deserve. But it will be a frumpy day at Christian Dior before more colleges go the no-test-scores route, and that reveals a key weakness in American education: red hot, unbridled obsession with standardized tests.

You can’t get into any fabulous establishment of higher learning/corporate culture in America without acing some kind of test. You can’t go to The Dalton School if you don’t genius-out on the Secondary School Admissions Test. Nobody will hire you over at the Boston Consulting Group or Goldman Sachs without taking and mastering case studies. You won’t get an MBA, a J.D., and in some cases a Ph.D. without scoring really high on the appropriate acronym.

The problem isn’t necessarily the tests themselves, because there is something to be said about having a mastery of a particular professional area such as Medieval History if you want to roll around calling yourself a professor of Medieval History. The issue has always been how much value we place on standardized tests as the bedazzled Louboutin of smarts.

About a year ago I was at the Yale University Bookstore looking for a magazine, and I couldn’t help but eavesdrop on a group of visiting high school students sprawled out on the floor, looking at current issues of US News and World Report. Because, of course, what else do high school kids read? The strange part, though, was that they were totally obsessed with quoting the exact cut-off SAT scores that Harvard, Princeton and Brown required to get in. They talked about their own scores, how many times they took the test to get that particular score, which of their friends got in or didn’t get in with this or that score. It amazed me because the conversation wasn’t about the quality of the school or the fabulous-sounding  “Sex Power God” parties over at Brown. These poor students were pocket-protector wearing number crunching pods, only capable of thinking about college admission as a number.

When I was in high school, I hated people who seemed to always get the highest score on whatever test they took. You’d pull up to them in the hallway after lunch and they’re all, “Yo, I so got a 59 on the ACT!” And you’re like, “Um, the ACT only goes to 36…” Then there were the people who aced the thing but swore up and down that they bombed it. “I totally bombed, bro. I only got a 1520 on the SAT.” And you just stand there, staring blankly, “Well, have fun at Washtenaw Community College!”

I’ve never done well on standardized tests. I did so poorly on one of those proficiency exams that most public schools require that one of my teachers tried to flunk me. But Delores Moore was not having any of that, no ma’am. And then I went on to collect a five on the ACT and a 10 or something on the SAT. Bombed the GRE, too.

But is somebody who can’t ace a standardized test less intelligent than the person who did?

Here’s what I’ve learned, and what DePaul’s decision to ex-out standardized tests proves:  no matter what score you get on any of these standardized bullshits—ACT, SAT, LSAT, GMAT, MCAT, GRE, whatever—the only thing they truly measure is your ability to take a test and squeeze out a number at the end. But that little number alone is not a marker of intelligence. In fact, in many if not all cases it’s a matter of class—did you live in a plush suburban cul de sac with a top public school district? Or did your parents just send you straight to The Dwight School? Maybe they paid Kaplan or Princeton Review several thousand dollars to teach your dumb ass how to take the test and get into Harvard.

Getting into college in America is about having enough financial resources to do well on the three-letter exam. Anyone within two feet of a college admissions office knows this. So why don’t more colleges, especially prestigious ones, just get rid of standardized testing to make college more readily available to all?

I’ll tell you why: $$$$. The college risks losing its ranking and its prestige. High test scores paired with low acceptance rates prop up a particular school’s reputation as a selective, fabulous place to be. And if a school slips in the rankings, it could lose money and, even more importantly, the illusion of prestige and selectivity.

DePaul’s decision is ultimately a double-edged sword. On the one hand, it will help make their diverse student body that much more so by taking a chance on those smart kids out there who just can’t be bothered to sit still for four hours to take a test. On the other hand, I doubt it will bring any sweeping changes to American higher education. DePaul is a wonderful school, but it is not highly ranked, and this is why the University can afford to take such a risk with admissions. DePaul isn’t trying to be “Harvard” or even the “University of Chicago” but “DePaul.” It knows its strengths, and DePaul is definitely an in-demand school, especially for all those gay teenage boys out there trapped in rural Indiana who can’t wait to move to the big city for college.

Is it ironic that a decision meant to open a great university to more students actually reveals the relentlessly corporate, capitalist structure of American higher education?