Won't Someone Please Think of the Children 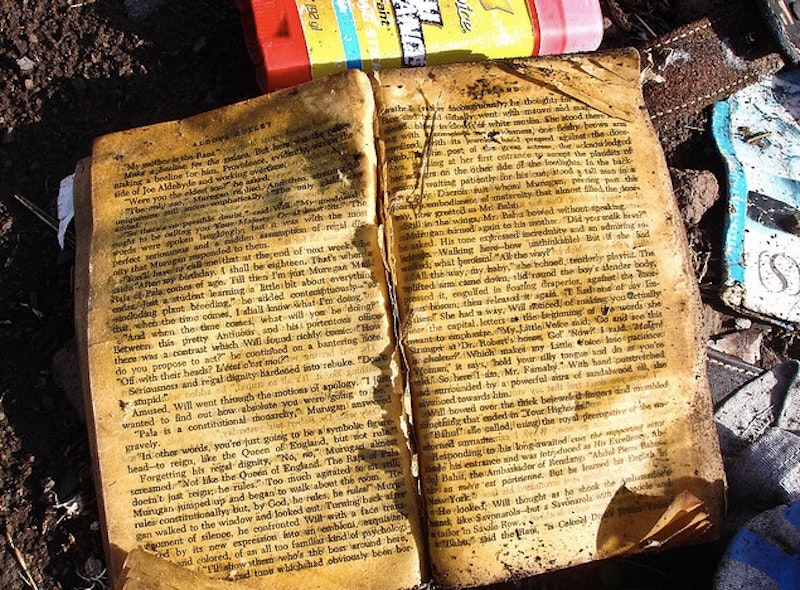 Another clash in the Digital Wars and it looks like e-books aren't faring too well. There was news yesterday from the Houston Press that Lamar High School in central Houston has undertaken a radical restructuring of its library, specifically by throwing away almost all of its books. As the Press put it:

Just adding a coffee shop to a neighborhood library so people can feel like they're in Starbucks and ultra hip was apparently too passe a trend for Principal James McSwain of Lamar High School.

Finishing up a week ago, McSwain has thrown out nearly all the books and filled the space they were unnecessarily taking up with couches and coffee and food and told his students that they can access the exciting world of reading through e-books!
So here’s what we’ve got: 35 new laptops in all, with full access to e-book websites like Questia, in a student-run coffee shop with expanded hours, 6:30 a.m.-6:30 p.m. Apparently the kids love it. As Sarah Greer Osbourne, spokeswoman for the HISD, put it: “They have never seen so many kids in the library before... the kids are eating it up that’s what they want [sic].” The Press’ Margaret Downing, however, doesn’t think much of the plan, nor do many of the older teachers. As one is quoted as saying:

"It's just stupid. It just boggles the mind. I'm sure there's more to the story and I'm sure that they can make it sound better than I'm making it sound to you but in the end it's a terrible story. There's no way in my mind that you can gloss this story and make it seem like a good idea.

"There's no way to get hold of a book on the campus to read for pleasure or to use to write a paper. If you don't have access to a computer of your own then you have to compete for one of the computers that are in the coffee shop. And you have to find a way to get it done during the time the coffee shop is open."
I don’t agree. Downing portrays McSwain as merely desperate to impress his superintendent with his “forward thinking.” Well, maybe so. Granted, the whole idea could’ve been executed with a little more caution; a test-run, maybe, before you trash thousands of books. But if Osbourne is right and the kids really do love it, then what’s the problem?

I don’t know how old Downing is but does she even remember how fucking depressing high school libraries are? How completely underused, to the point of outright student avoidance? It’s almost seven years since I graduated from Smithsburg High School in Western MD, and while Smithsburg is about one-fourth the size of Lamar (my graduating class was under 200), I never knew anyone who checked out a book. Ever. I’m not even sure you could check out books. You might have had to read them right there, sitting at one of those old fake-wooden tables that threatened to collapse if you so much as brushed up against it.

In fact about the only thing I distinctly remember about Smithsburg’s library was that during my ninth grade year two juniors were caught fucking in it. Do you know what that means? It means they decided other acceptable options like, say, the janitor’s closet or the backstage of the theater were just too highly trafficked to risk it. “No, baby, we can’t saddle up in the boiler room, someone might find us; let’s just go to the library.”

Look, I hate Kindles and e-books too; I prefer an old-fashioned hardcover. But if Lamar’s students go for Books 2.0, if indeed this coffee shop inspires them to read more and to do better work, well then, congratulations Principal McSwain. Job well done.