Who cares that a bunch of Ivy Leaguers were caught dealing a few thousand dollars worth of drugs? 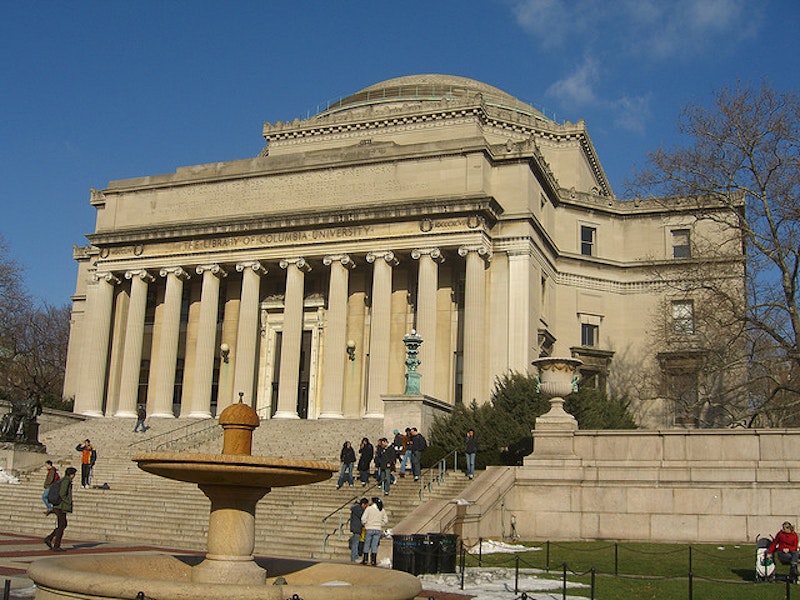 This week in higher education News, five Columbia University dudes were arrested for dealing LSD, pot, cocaine, Adderall and MDMA. Sometimes they would sneak the drugs onto things like SweetTarts or Altoids, probably to get them through especially boring Archeology lectures. The arrest, dubbed “Operation Ivy League,” was the culmination of a five-month undercover investigation, in which police secretly bought $11,000 worth of illegal goodies from the kids. Oh, and one of the culprits, Jose Perez, doubles as a Gates Millennium Scholar! So, you know—on the off chance you were curious about how your well-educated Ivy League kids are spending the hard-earned family money!

No matter what your feelings on drugs as soft as marijuana or as hard has heroin, all I can say is: of course there was a drug bust at Columbia University! What do you expect? A tea party? I mean—hello—first of all it’s New York, which is the only city in the country where you can get anything delivered right to your door, any time. Plus, imagine all the frustration those Gossip Kids must feel, trapped way up there in “Boringside” Heights, a full 100 blocks away from where it’s cool and hip and neat.

All I can say is: $11,000 worth of drugs over five months? So that’s like, what, $2200 per person, per month? Yawn. Last year on my block in Williamsburg there was an $800,000 drug bust. Now that’s news! This Columbia flare-up is a media event only because it’s Columbia, and the media is obsessed with everything happening on Ivy League campuses. Plus, anywhere there is an elite campus, the local police love to crack down and teach those spoiled brats a thing or two. Like back in early fall when New Haven Police randomly raided a Yale party and tasered students for no reason.

But let’s get real: drugs are being snorted and licked on college campuses everywhere at this very second, especially the elite ones with names like Princeton, Harvard and Dalton. It’s finals time, people!

I believe in learning the hard way. You can tell somebody not to do something, but if they want to do it, they’re going to do it and that’s that. So rather than go undercover and expose people for the sinners they are, we need to come up with a better way to educate people about the dangers (and sometimes joys!) of drug use. In reality, the danger’s in the reprimand, not in the act. You know, the more you say "Don’t do this!" the more people are going to do it, whereas if people didn’t freak out about stuff and let folks experiment as they wish, we might find that people are their own best police. Except when they’re not.

I’ve never seen anybody do drugs at my campus, but I know people who do them. It’s one of those things that everybody does, but nobody talks about. There’s something about campus life and drug culture—or maybe it’s unbridled experimentation, more broadly. I had a roommate in college who basically lived in a bong. All he did was pack hits. Drug busts or not, reprimands or whatever you want, students who want drugs are going to figure out a way to get to them, and there’s not much anybody can do to stop it.

I probably sound like a huge drug head advocating free use of pot, etc., but here’s the truth: I have never touched a drug in my life. Not a lick of cocaine, a puff of weed. Not even nicotine. The idea of being under the influence of some strange substance totally freaks me out, because I’m a relentless control slut who likes to know everything that’s happening at all times. I’m not about to put something in my body not knowing who the hell made it, where the hell it came from, and what the hell is in it. Especially once I heard that meth was cut with bleach? Oh hell no. See that? That’s me being my own police.

That said, I find drug culture endlessly fascinating. Novelists like Jay McInerney, Bret Easton Ellis, and Nick McDonell have written pages and pages about drug use, college, and experimentation. The extremely attractive literary agent Bill Clegg wrote a fabulous memoir about his battle with crack addiction. I never thought I could read 300 pages about somebody who would rather pack hits for hours and hours than hang out with his boyfriend. But I did, and Portrait of An Addict As A Young Man is one of the best things I’ve read all year. It lives next to my bed stand.

The media like to prey on college campuses and student life as a way to show what’s wrong with young people—we’re all so busy drinking, partying, hooking up and drinking Four Loko that we don’t know where we are at any point of the day. That’s what bothers me the most about “Operation Ivy League.” You know, it’s less about the drugs and the welfare of the drug dealers than it is about showing unbridled debauchery at an elite college campus. See, them there Ivy League kids ain’t as good as you think.