The Glorious Noise of Lovesliescrushing

Many of My Bloody Valentine's successors toned down the aural overload, but Lovesliescrushing have gone in the opposite direction. 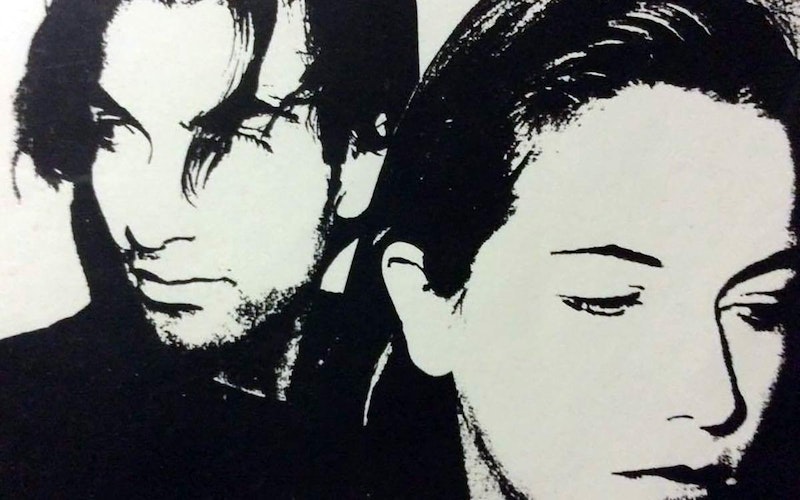 For most people, shoegaze means My Bloody Valentine, first, last, and in-between. And who can argue? MBV created and perfected the genre, with 1991’s justly celebrated Loveless, a document of high decibel bliss fusing the Cocteau Twins and Hendrix’s “Waterfall” as languid fey melodies wander through the distortion on their way to fuzzed-out nirvana. It’s pioneering. It’s great. What more is there to say?

Originators get lots of deserved credit. But there’s something to be said for the decadent extremism of imitators, especially when you’re taking about a decadently extreme genre like shoegaze. In 1993, East Lansing, Michigan natives Scott Cortez of Lovesliescrushing and Melissa Arpin-Duimstra took a break from listening to Loveless on repeat to record their own version. They surpass the original by simply doing everything the same but more, following shoegaze to its logical endpoint of disincorporation, distortion, and ecstatic ear drum injury.

Many of MBV’s successors—like Ride—toned down the aural overload to move a step or two towards pop. But Cortez went instead into glorious noise, using his four-track recorder to create a blast of feedback that has as much in common with the grinding blare of Xenakis than the Cocteau Twins or Slowdive. The album’s opener “Babysbreath” starts with an electronic whistle that’s half flute, half fingernails on chalkboard, before Arpin-Duimstra’s multi-tracked vocals are ground beneath a cascade of heaving boilers. The next song, “Teardrop,” is a 30-second respite with a half-busted music box, before “Iwantyou,” unleashes a blare which overwhelms speakers, pauses, then overwhelms them again, like some desperate cyborg dragon breathing fumes and white noise interspersed with Cortez sighing “I want you.” Tracks like “Dizzy,” “Burst” and “Crushing” could be Harsh Noise Wall if it weren’t for the hint of vocals far down in the mix and the vague hints of melody.

Not every track is so resolutely anti-pop. But those that make more concessions to some conventional concept of music feel even more uncompromising. “Precious,” for example, is a recognizable lullaby, the gentle vocals sliding over a choppy distorted guitar clog. “Sugaredglowing” has a strummed melody under the layers of volume fuzz. But that melody doesn’t go anywhere; the same few chords just repeat for six minutes without ever turning into a hook, like Cortez started to write an actual song and then got distracted by a dust mote with the face of Philip Glass. “Bloweyelashwish” is Enya with the Orinoco Flow drowned in cough syrup, as Arpin-Duimstra’s vocals turn into slowed down New Age concussion.

Less accessible music isn’t necessarily better music. Noise and experimental artists have their own tropes and clichés, and no one wants to jam ice picks into their hearing organs all day. But shoegaze from its inception had a great scrawling poetic weirdness longing to ululate free, and for anyone who loves the genre, or even likes it, it’s exhilarating to hear Lovesliescrushing follow this particular psychedelic path of melting lyricism to its loud and broken conclusion.

Cortez and Arpin-Duimstra went on to make the more ambitious, and more stylistically varied Xuvetyn, and shoegaze itself morphed into numerous other forms, from the panning-across-the-fjords wallpaper of Sigur Ros to the panning-across-the-abyss metal hybrid of Alcest. Lovesliescrushing is mostly forgotten and the influence of bloweyelashwish is minimal at best But that’s a kind of testament too. Sometimes a great album makes others want to recreate it. And sometimes it’s so perfect, and so final, it leaves its successors nowhere else to go.