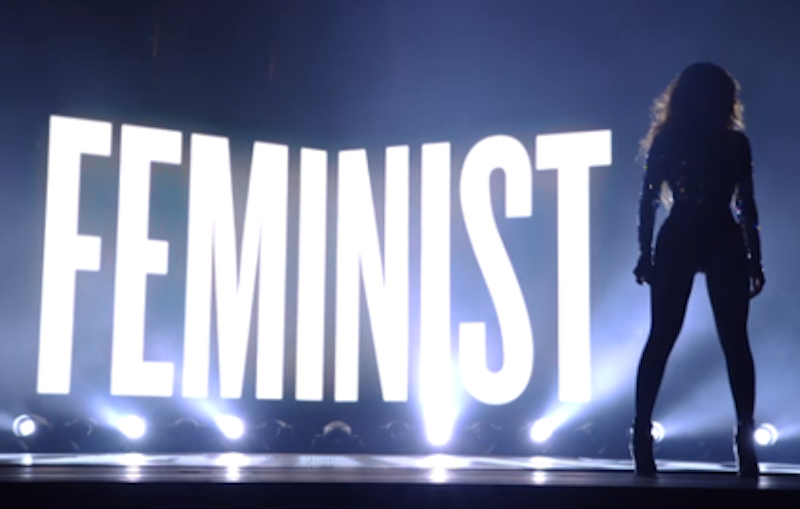 I couldn’t afford the XM radio in my car anymore, so this summer I’ve listened to the regular radio stations selected by my tween (who rejects this word). If my 20-year-old is in the car, she outranks and chooses 103.1 WRNR out of Annapolis for alternative, but the rest of the five of us in the family don’t really care what plays. The middle schooler does, so top-40 tunes are usually on deck for family car trips.

There were a bunch of fun, girl-power songs released this summer that I think are great. From Katy Perry’s “Dark Horse,” Ariana Grande’s “Break Free” to Nicki Minaj’s “Anaconda,” and “Black Widow” (Iggy Azalea ft. Rita Oro) and “Problem” (Grande, Azalea) to the “Bang Bang” compilation by Jessie J, Grande, and Minaj, these songs are about women who are in complete control of themselves and their sexuality, who don’t need men for anything except when they happen want them for something.

At this year’s MTV Video Music Awards (VMAs), these sexy singers were putting their talent out there, not to mention their asses (seriously booty-jealous of Beyonce, Minaj and Azalea). Minaj had a wardrobe malfunction, but the night was dominated by sexy women, capped by a show-stopping medley by Queen Bey.

“Of course, Beyoncé’s silhouette stands tall as the word “Feminist” lights up in large block letters, projected on the screen behind her.

‘Watching Beyonce slide down the stage with a big sign saying FEMINIST behind her just ended me. I am done. Goodbye,’ one tweeted, another expressed confusion by noting that ‘it’s all about the deregulation of sexualization.’”

No, Fox News and your non-bylined article. No one is confused but you. You’re quoting two anonymous tweets as your source, both of which are vague in the first place? Crappiest reporting ever? You’ve provided absolutely zero evidence for the “eye rolling.”

"We teach girls that they cannot be sexual beings the way that boys are. We teach girls to shrink themselves, to make themselves smaller. We say to girls 'You can have ambition, but not too much',” says the voice-over. “Feminist. The person who believes in the social, political and economic equality of the sexes.”

Beyonce, arguably one of the most powerful singers in music today, chose to promote a feminist message. I couldn’t help but think she was trying to do away with what has unfortunately become negative message imagery associated feminism of a past era and replacing it with a women-positive sexy image. We got this. We don’t need concern-trolling men or women telling us we’re not equal. We are equal because we believe we are equal.

“These are songs that remind women not to obsess about looks and perfection (‘Flawless’), sexual pleasure ought to be a two-way street (‘Blow’) and pleasing your man isn’t an anti-feminist endeavor (‘Partition’),” says Eliana Dockterman in the Time article “This Year’s VMAs Were All About Empowered Women,” where she notes that the message from women this year at the VMAs is clear:

“We’re taking over. And we’re not sorry.”

She points out that Nicki Minaj in the oft-blogged “Anaconda” video “has always done what she wants whenever she wants without any consideration for anyone, let alone the opposite gender,” and says the “Black Widow” performance “celebrates girl power in a way rarely seen in pop culture.”

The songs mentioned so far represent not only diversity in the women who sing them (in race, in background, in size) but a healthy attitude of empowerment. My favorite so far is the new hit “All About the Bass” by Meghan Trainor—the “not a size 2” girl—whose song sends a body-image positive message to girls: “Every inch of you is perfect from the bottom to the top.” I love that a body acceptance anthem, in addition to all this sexy power, is at the top of the music charts.