Once in a Lifetime 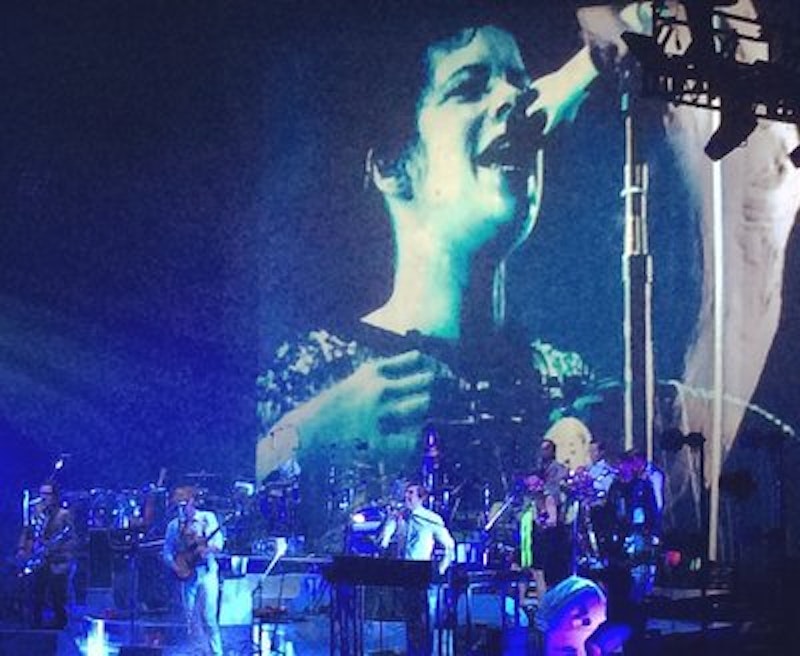 Like everyone else who didn’t make it out to Darlington last weekend, I’m sad I missed Fields Fest, a camping festival that was the spiritual successor to Whartscape that Dan Deacon teased four years ago and was finally realized by Stew Mostofsky and Amanda Schmidt. I could’ve ditched my plans for Saturday and Sunday after Fields was announced, but my deep fear/discomfort of camping and doubt that I’d be able to be in the woods for three days and reliably eat, not over-indulge and actually have a good time was too strong to change course. At least I had an okay excuse: just days before I found about Fields, I got a ticket to see this lineup at the Barclays Center in New York: The Unicorns and Dan Deacon opening for Arcade Fire. This was equally urgent, I felt—I mean, The Unicorns are a band I was sure I’d never see, and Sunday was their last scheduled date, and a full reunion is just not going to happen. Also, I was really excited about seeing Dan Deacon play to a sold out basketball arena. Arcade Fire lost me at The Suburbs, but Funeral and especially Neon Bible are great records: that’s a statement that’ll get you booed out of the room but c’mon, if they weren’t massive many of the same people who dismiss them would be stan-ing for them big time just like The Unicorns, whose set was cut a bit short to accommodate…Television. On the way up to New York, I found out fucking Television would be playing too. They opened for Dan Deacon!

So I’m stuck in traffic, biting my nails because The Unicorns are going on 15 minutes early, and I’m stalled on the Manhattan Bridge. Luckily, I made it to my seat right as they began, but it was disappointing seeing how empty the place was for this amazing band that might never play together again. I mean, there were maybe a thousand people in this arena for their entire set, if that, and of course half of those people didn’t know Who Will Cut Our Hair When We’re Gone? Man, that is still such a singular piece of work. Nick Thorburn, who still runs his group Islands, was much less enthusiastic than Alden Penner, who gave a great show despite talk he was the one who didn’t want The Unicorns to go beyond a purely DIY, Fugazi-approved affair. I got to hear “Ready to Die,” “Inoculate the Innocuous,” and “I Was Born (a Unicorn)” live though. They floored me—Penner and Thorburn’s harmonies are John and Paul level of symmetry. It’s sad that they don’t have a future as The Unicorns, or as anything, because even if they ditched the old songs, the sound of their voices together is just beautiful. But that’s it: Thorburn is the, thorn, and he talks like Roger Waters as much as he looks like him. What a bummer.

Their set was cut short, but no one could complain, because it was for Television. What a turn of events. Say what you will about Arcade Fire’s music and their ambition for and success at old-school rock stardom—they’re some of the good guys up there. I would’ve gotten my money’s worth before they ever took the stage, just seeing The Unicorns, Television, and Dan Deacon play in a basketball arena. So I’m sitting in my seat as the arena slowly fills up, and calypso music is pumped through the P.A. The members of Television take the stage as “Pon de Floor” by Major Lazer plays, and they quickly start with “1880 or So,” a song I don’t know and had to look up on setlist.fm. In fact, the only songs I recognize during their short set are “See No Evil” and “Marquee Moon.” The band’s power hasn’t diminished with age at all, although Tom Verlaine’s voice sounded blown out or out of practice. I was pissed that the best part of “See No Evil”—that lightly modulated guitar arpeggio during the chorus in between the “I SEE!” chants—was missing, although on checking some of my video footage the next day, it was there, I just didn’t hear it. I just looked at them with my eyes wide and my mouth almost open the whole time, not recognizing most of what they played but still in shock that I had gone to see Television play by accident. So as the last strains of “Marquee Moon” fade out, Dan Deacon pops up on a small stage on the opposite side of the arena out of nowhere, suddenly illuminated and about to begin. He said something like, “Wow… that was one of the most beautiful experiences of my life, watching one of the most seminal bands in popular music history, and now I have to follow them, and this is inspiring in me, a lot of feeling of musical inadequacy…Anyway! My name’s Dan Deacon, I live in Baltimore, Maryland…”

By the time Television finished (who also played to a half-empty arena), the place was nearly full, and Deacon plowed through his also-abbreviated set: “Of the Mountains,” “Konono Ripoff No. 1,” “The Crystal Cat,” and two new songs I remember from a show of all new material at The Crown last fall. I overheard the guy next to me explaining Deacon to his girlfriend with so much enthusiasm I almost struck up a conversation, but Deacon was on and then off in a flash. During his dance circle ritual, he picked a man in a mask to lead the crowd in the center—not knowing it was David Byrne, who sang a Suicide cover at the end of the night with Arcade Fire. Deacon later said he had no idea it was Byrne when he picked him out of the crowd and was just blown away. It was pretty amazing seeing Deacon play to so many people and command their attention. Those first three songs he played, he’s done for years and at nearly every show of his I’ve gone to (dozens and dozens now). Through the massive sound system they took on new life. I was surrounded by people who’d probably never heard his music, and they were captivated. He played alone though, having to commute back and forth between Barclays and Fields Fest all weekend, where he performed three separate sets.

I was thinking about leaving and catching an early ride back to Baltimore before Arcade Fire went on. But I thought, eh, those first two records are great, and the stage show is probably insane. This show moved briskly—not five minutes after Deacon was done, the members of Arcade Fire and their doppelgängers, wearing paper mache heads, emerged from the back of the GA area, and walked slowly towards the stage as slack-jawed fans parted and stared. Kick right into “Reflektor,” a monster song that didn’t leave an impression when I heard the record last fall. So now there’s around a dozen people in Arcade Fire? Where was the guy that plays the one drum, though? I counted three guitarists, a bassist, three keyboardists, a violinist, two or three drummers, and three saxophone players. Win Butler had only a wireless mic for most of the night, jumping around the stage like a Bono/Kanye combo, with big red elf shoes and a stripe of warpaint over his eyes. He was aggressive, singing with a scowl and a cock rock assuredness that carried his bands huge tunes. “Flashbulb Eyes” was second, and Butler grabbed a bunch of phones from the front row, taking pictures of himself as he sang about the same.

After that, I don’t know any of the Reflektor song titles, but they played “Power Out” and “Rebellion (Lies)” back to back. Huge, huge, huge. The sound of this band live is something to behold, if you’ve ever been a fan of their songs, no matter how long ago you stopped listening to them all the time. I mean: “Power Out” was explosive, words fail me, it was a sound so big and gnarly but absolutely tight and precise. I flashed on melodies I’d forgotten since middle school, like the descending guitar riff at the end of “Power Out” or the excellent opening line to “Rebellion (Lies)”: “Sleeping is giving in/no matter what the time is.” They didn’t play my favorite song, “Laika,” the one that hit me when I worked at their Merriweather show in 2010, on a break and looking for a place to smoke. I’d never thought much of that song or the band by that point, but it was one of those lightbulb moments—looking up at Win Butler on the jumbotron in his faux-military gear banging on his guitar singing that wonderful chorus, “Our mother should’ve just named her Laika.”

I think a lot of the criticism and uncool-stink around Arcade Fire comes solely from their success. Random example: if Future Islands had the same trajectory, the same people who talk shit on Arcade Fire without ever having heard much of their music would be dismissing Future Islands. That said, Arcade Fire’s last two records have been too long and too patchy for me—the piano-based title track from The Suburbs hit me that night though, even if Butler’s introduction (“This is a song about the cops pulling me over when I was a teenager in the suburbs”) was a bit much, considering recent events. I wouldn’t have thought of it otherwise, but what they’d nab you for, a dime bag? Underage cigarette smoking? I left after the excellent “No Cars Go,” finding nothing interesting in the rest of the set.

I loitered around Midtown, smoked an apple bowl, and waited in Penn Station for my train, eavesdropping on depressing conversations between divorced dads and the ex-wives who wouldn’t let their daughter see them. I didn’t sleep at all on the way back, and by the time I got to Baltimore at sunrise, I was still wired from multiple espressos and made it to my parents’ house to give my brother Booker some birthday presents. I got some sleep in the middle of the day but still felt exhausted, almost as exhausted as every one of my friends who went to Fields Fest. But I saw Television open for Dan Deacon. I’m carrying around that one in my pocket for a while.