Guardians Soundtrack Is the Dumbest and the Best

Deformed oddball hits of the mid-1970s save the galaxy. 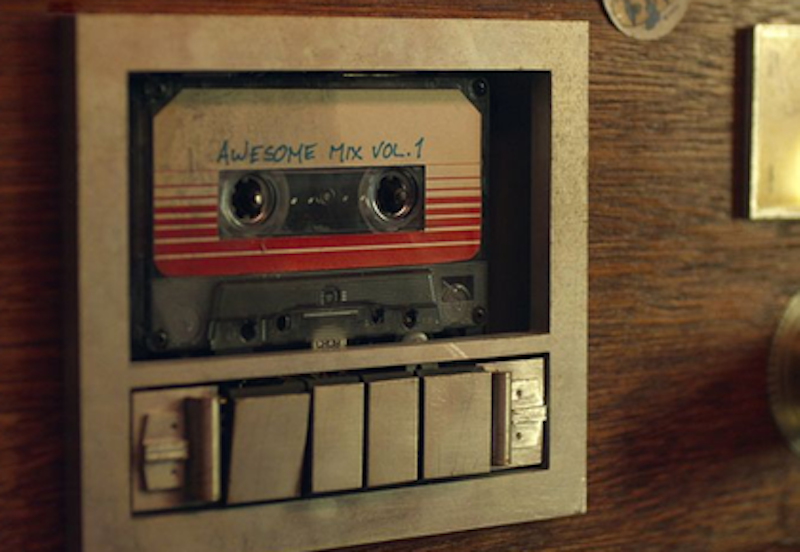 The Awesome Mix Vol. 1, the soundtrack to the new blockbuster Guardians of the Galaxy, is a bunch of done-to-death songs that have been knocking from anthology to anthology since the 1990s. Now they're so old they're new again, which is fine; they were always miraculous and still are, and maybe there's a new crop of people ready to hear them. So many years have been mulched to reach this point, where “Fooled Around and Fell in Love” (Elvin Bishop, 1975) and "Escape (The Piña Colada Song)” (Rupert Holmes, 1979) can be hung against CGI explosions and cathedrals of digitally invented futuristic interiors and strike someone as new things that throb with life. But the time is here. Hooked to Guardians, the old sound falls on the ears fully alive.  The songs are back.

Flukes and one-hit wonders dominate the Awesome line-up (why not, given the oddballs who populate Galaxy). The Jackson 5 have a song (the warhorse “I Want You Back,” 1969), as do Marvin Gaye and Tammi Terrell (“Ain't No Mountain High Enough,” a ringer from 1967) and David Bowie (“Moonage Daydream,” 1972). But that leaves nine tracks by non-greats who belong to their era instead of the ages. Not Harry Nilsson or Steely Dan or Todd Rundgren, but 10cc and the Raspberries and on down, all the way to Blue Suede and Elvin Bishop.

Most of the songs are from the mid-1970s, and they're goofy things with a marked tendency to be beautiful. The collection kicks off with the magnificent “Hooked on a Feeling”  (Blue Suede, 1974), the musical centerpiece of the Guardians movie.  The song gets going with the most reviled hook of its era, a chanted chorus of “Ooga-ooga ooga-chukka” that marches the ear along until the song proper bursts free, arcing with the singer's voice as we realize the feeling in question is a good deal like joy. “Ooga-ooga-ooga-chukka” is a stupid thing to stick onto a song, and the makers have some gall, but that gall produces a sort of combustion.

Which is how it is with most of the songs on Awesome Mix. They're elbows-out songs, aiming straight for the pleasure center but never trying to be smooth. The 70s of absolute mellow (“Raindrops Keep Falling on My Head,” “Time in a Bottle”) doesn't make it here. The songs wail (the Raspberries' “Go All the Way,” 1972) and strut (“Come and Get Your Love,” Redbone, 1974). Each one is a trip, even though all it really wants to do is make you hum and snap your fingers. The soul tracks (the already mentioned pair of Motown songs, plus the Five Stairsteps' soaring “Ooh Child” from 1970) lack the oddness of the pop songs but pack at least as much punch.

There's going to be an Awesome Mix Vol. 2, of course. Sad to think of the magic getting worn down, as happens with franchises. But at least there'll be room for “Seasons in the Sun,” an aggressively poignant song about a dying young man's farewell; it moves with a shameless lilt set off by boingy echo effects and an electric piano. At any rate there ought to be room for it. “Afternoon Delight” and “Moonlight Feels Right” would fit in too.

Fine touches.  The collection's title artfully leaves out “Tape,” because that's how people did it when they made tapes; the thing in hand was obviously a cassette, and whatever you wrote in your Flair was just to tell this one from the others. No “Tape” is a small thing, but these are touches that show closeness to the folks. The creators in Bel Air want to share the vibrations that move the millions out in the land of refrigerators and potbellies and lawns.

Check out the graphic. The tape label, the handwritten Flair, the black rims of tape on staring plastic spools, the visual clunk of the aluminum buttons lined up as chunky rectangles that can't get their widths to match—you look at this tape and its tape machine, this pair of much-used, kicked-around relics, items normally found on the floor of a big brother or an uncle, and you look at things that must be real because they aren't that interesting. I don't even know which tape company it is, but I've seen this label before and I feel dispirited by it. It gives off the flat boredom inspired by covers of health ed. textbooks from 1976. And now it's faded; it looks like something that once thought it was clever but has seen a century end and another get some miles on.  Now here we are, and Elvin Bishop is meeting the 21st century.