If we don’t think music, we forget what we’re even hearing most of the time. 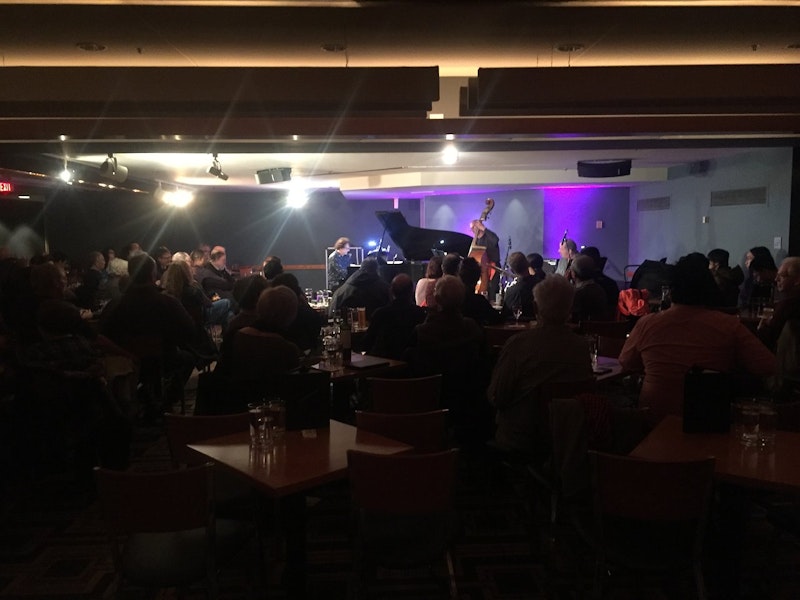 I always hated the categories. I grew up in the mid-80s into the 90s. Suburbanites learning the word “rap,” which later transformed into hip-hop. Rock ‘n’ roll. Rock. Metal. All these substances. Classic Rock. Alternative. As if all music isn’t an alternative to the monotony of daily life. Then Grunge came along. For a few minutes in the mid-90s: Ska. I liked jazz, too. I’d been learning how to play trumpet from fourth grade through eighth grade.

In high school, I discovered jazz. I loved the piano. Mom had old jazz records. I’d take girlfriends on dates to the Regattabar, in Cambridge. This was a bougie club in Harvard Square, in the elegant Charles Hotel. I wasn’t there because I wanted to be high-class. I was there because it was all-ages, romantic… a bus ride away from everything that reminded me of high school. Plus the jazz was great.

We’d step into that dark, romantic room with square wooden tables and velvet-lined booths. When the lights went down, there was that spotlight on the piano. There were the hands on the ivory. A different universe. I was so focused on those musicians. Watching them in the quiet moment when the audience becomes invisible. It’s intimate. The acoustics, the lighting… you’re seated… and a moment is opening up.

Categories in music were designed to help people find the actual records in record shops. In my experience, Newbury Comics in Harvard Square. To locate the CDs. I'd go with friends when I was in high school. Pre-internet. Pre-MP3. The bus to Harvard Square. Pizza at Café A then enter the huge room of waist-level bins, alphabetized and categorized. A kind of trance would take over, as I searched my mind for band names I’d heard, a video I’d seen on MTV at Dad’s house. Music became something more than music when I recognized the importance of escaping from reality.

A few years later, when I dropped out of college, I was back around Boston. 2001-2003. Music became something I lived and breathed. I was miserable. Paying off student loans. Working at a chain steak house. Needing something to get me through that wasn’t going to be self-destructive. I was already teetering on the edge of self-destruction. My family thought I was spending too much money on music. They should’ve been relieved it wasn't spent on more destructive substances.

I’d read about music on Pitchfork or Metacritic. I’d walk in with a portion of the cash from the week’s tips, after depositing most of it and paying rent. Then something for me. I’d buy five or six CDs, stack them on the counter at the register, pay and bring them home. I’d intentionally not look at them, dumping them in a drawer. Every Wednesday, I took a CD out of the drawer, unwrapped it from the plastic, and removed those extra-sticky label stickers on the top, and put the disc in the car for a week. Then not let it out of the car’s CD player for seven days. Wednesday CDs. A ritual. Listening for something I needed. Imagining the way pain is channeled into sound, into lyrics, into art.

The World of Sound. It’s a different world I can escape into. Listen and leave the prison of my own mind and spiraling depressive thoughts. How to be on my own, paying off these student loans, figure out my relationship, where I was going to finish college, all of these huge uncertainties that were overwhelming my life. I could listen to music and it would take me away from all of that. At least for a week. Then the next one.

Now those CDs are with me in this garage. The jewel cases take up a plastic storage bin. The CDs fill up those enormous leather cases. First mp3s on Napster and LimeWire, and then the iTunes revolution and the move toward streaming with Pandora, Spotify and all the rest. I’ve adapted. But over the last decade, I still occasionally ordered CDs. I’d put them in the car and listen with some level of intentionality. That is, until our newest car came with no CD player. I wonder about the power of music from time to time. It helps to talk with actual musicians, those that have dedicated their lives to sound. If we don’t think about it, we forget what we’re even hearing most of the time.