There Are Two Ways to Write About Bob Dylan

A review of Chris Gregory’s Determined to Stand: The Reinvention of Bob Dylan, a masterful combination of the genres. 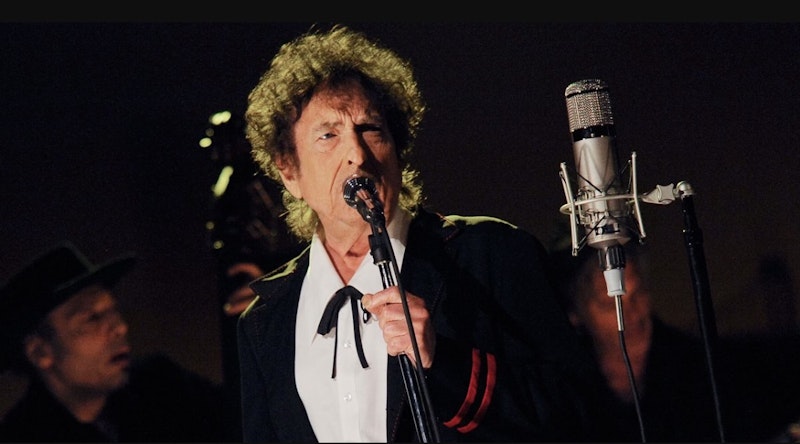 How do you carry your perceptions of Bob Dylan across the cultural and existential barriers which separate fans from non-fans, fans of one version of Dylan from fans of another, and the generations which divide all of us? People who write books about Dylan typically use one of two methods for smuggling their perceptions about Dylan and his work. We might call the options Old, Weird, America vs. the Song and Dance Man. In the first, pioneered by Greil Marcus, the author presents themself as a character in Dylan’s imaginative universe, with the book itself acting as a kind of found object picked up on a park bench in a place where Dylan lyrics are eternally recurring. A cinematic example of this method is I’m Not There, where different actors play different Dylans, each living out the mood and spirit of his various phases. The mid-1960s Dylan, played by Cate Blanchett in drag, runs around with the Beatles like a Mod Looney Toons character unhinged on dirty biker crank. The mid-70s Dylan is a sad and oblivious Christian Bale, imprisoned by the vapidity of celebrity and powerless to stay faithful to his long-suffering wife. Each shows more than it tells.

The second kind, named after the book by Michael Gray, gazes on Dylan’s work from the outside rather than speaking as his work, from within. It’s a quest, perhaps Quixotic, for the ideal perspective on Dylan. What it gives up in lifeblood, energy, and creativity, it makes up for in exalting Dylan’s work as a proper object of “serious” contemplation. Dylan might typically give his patented sneer at the dipped-in-concrete reifications of the normies “at the old folks home and the college,” people who need “roadmaps for the soul,” but it’s also true that his work deserves to be contemplated in both places (and everywhere: jails, ballparks, playgrounds, whorehouses) as something which stands alongside the Constitution, the detective story, and Lord Buckley’s monologues as the best American culture has to offer.

The second kind of Dylan book, which appears on the surface to be more straightforward than the Greil Marcus fever dream, is much more difficult to pull off. First, there’s more competition. Publishers aren’t willing to roll the dice on experimentation in American writing, much less a text that tries to channel Dylan’s orphic energy. So there are just a lot more “straight” books about Dylan making it to print each year. But what this means is that when you actually get around to chronicling your foolhardy but loving attempt at saying something new about Dylan you have to be really, really good just to separate yourself from the heat of the herd. And you have to have something unique to say. That might seem all but impossible when it comes to Dylan, a quarry that has been mined about as thoroughly as Lincoln or Churchill, but as poet and novelist Chris Gregory proves with Determined to Stand: The Reinvention of Bob Dylan, Dylan’s radioactivity is still hot enough to give off waves of invisible energy. And Gregory’s case is simple: the late Dylan, early-1990s to present, is as living a creative force as any incarnation of him yet. And maybe even more so, since the Dylan of “Not Dark Yet” and Shadows in the Night continues to beguile while the long-dead Dylan is waxed over nostalgically by members of the local Elks Club.

Lester Bangs said that the 1960s were dead when it was okay for a kid in the Midwest to have long hair. What do you do when the louche, self-indulgent rebellion you helped to midwife has itself become commodified into popular culture? You put on a bolo tie and sing a lyrical collage of Henry Timrod and Robert Burns.

I first started getting into Dylan as a teenager, when I bought Time out of Mind as a freshman in 1997, a moment when popular music was so rancid that the small platoon of sensitives I was marooned with in the Atlanta suburbs were forced to turn to the older gods for spiritual succor. There was a moment when The Doors and Pink Floyd were communicating to us from some place where “time is dead and all things stand still, and always will,” and Dylan was obviously the Poet Laureate of the divine cohort. His album, the best he’d released since Blood on the Tracks, saw me across the hard transformational lines drawn in the sand of young experience: love (“…I’d go crawling down the avenue…”), heartbreak (“you left me standing in the doorway crying…”), drugs (“Reality has always had too many heads”), mayhem (“I’m twenty miles outside of town and cold irons bound”), political cynicism (“someone just asked me if I’m registered to vote…”), and moving to an even duller suburb of my hometown, St. Louis (“When I was in Missouri, they would not let me be / I had to leave there in a hurry, I only saw what they let me see”).

Early in my senior year, 9/11 happened on the same day that Dylan released his arguably even more powerful follow-up, Love and Theft. The towers fell on Tuesday. I had the album on Wednesday. “Summer days, summer nights are gone…” The world was shifting, and it felt like Dylan had not only anticipated the tectonic force but created an album to guide us through it. He’s always existed within a kind of double vision, simultaneously inside of, but antagonistic towards, the prevailing times. His cold eye unmoved by the vapid assumptions of the moment. People wanted reassurance after 9/11, a triumphant counterpoint to accompany their stadium flyovers and Hummers. Instead, Dylan reminded them that “The emptiness is endless, cold as the clay / you can always come back, but you can’t come back all the way.” Every Dylan song is a protest song against something.

Which is what makes Chris Gregory’s book so radical. It’s hardto see how Dylan singing the Great American Songbook works against the prevailing winds. As Gregory points out, Dylan justified his 2015 American Songbook album Shadows in the Night by explaining in an interview that the old pop standards “…have been covered enough. Buried, as a matter of fact. What me and my band are doing is ‘uncovering’ them. Lifting them out of the grave and bringing them into the light of day…” It’s something that Dylan has always done, to some extent, but lately he’s seems to be making a studied practice out of necromancing, not simply the past, but specifically the American musical past that Dylan’s earliest and most foam-at-the-mouth fans first picked up Highway 61 to escape. The smokey lounges and crowded ballrooms of their parents’ courting years, replete with well-oiled crooners, orchestration, and lyrics that even your math teacher could understand. As Gregory explains, and it’s worth quoting at length:

“Dylan has often professed considerable admiration for the disciplined economy of the work of lyricists such as Johnny Mercer and Ira Gershwin, whose songs have been recorded by multiplicity of artists but have often been ‘smothered’ by orchestration and over-emotive singing. His approach has been to present ‘stripped down’ interpretations, using his own touring band to provide very minimal musical settings in order to rescue them from over familiarity and ‘schlocky’ musical presentation and thus to ‘uncover’ the skill of these writers. By removing the music’s usual framework, his aim has been to deconstruct the audience’s preconceptions of mainstream pre-rock popular songs, demonstrating that they can—if presented sympathetically and sparingly—subtly convey real rather than fake emotions in a way that is just as ‘authentic’ as any folk song. In ‘stripping down’ these songs he is also able to expose and emphasize the music’s root in the jazz and blues traditions which have always formed a backdrop to his own work.”

The abundance of scare quotes aside, Gregory is really good at explaining the method behind Dylan’s misleadingly late-in-life (one assumes) turn towards the past. I was skeptical at first myself, but Gregory does such a top-notch job at building his case through analysis after analysis of individual songs and performances, that anyone who doesn’t come away a convert probably has some secret vested interest in safeguarding the status of their own personal favorite “Dylan” and weren’t really going to change their mind anyway. How could anyone resist this: “Dylan’s main interest in ‘uncovering’ these songs seems to be in unearthing their tragic essence. In the performance, stepping up to centre stage without and instrument, the songs operate in this deliberately theatrical setting almost as soliloquies—intimate revelations of the innermost thoughts of the singer. This creates a prevailing mood of despondency which is most explicit in his rendition of Melancholy Mood (on Fallen Angels).”

And then you check out the YouTube video of the specific performance that Gregory’s dissecting and you confirm: he’s right. There’s something there, and in order to really uncover and enjoy its secret power you’re forced to adjust your expectations of who Dylan is and what he’s doing onstage. This isn’t just a book written by another Dylan expert. This is someone with true insight gleaning a bit of what Dylan’s doing and then sort of recreating the process on stage, utilizing a profound knowledge of musical and cultural history to perform a kind of intellectual necromancing:

“I Made Up My Mind” is arguably the supreme achievement of Dylan’s engagement with the sentimental tradition. He uses language that is relatively straightforward, but which recalls the subtlety of expression of the more personal songs of lyricists like Ira Gershwin, Johnny Mercer, or Oscar Hammerstein II, to take us on a journey through a range of different emotions. Despite the pain and anguish that he—like all of us—may have experienced in life, which is conveyed eloquently in his expansive vocal performance, he expresses a wonderful positivity here. He transforms what appears to be a hopeless lover’s plea into a transcendent message directed at all of creation.”

That gives a perspective of Dylan from a remove while also simultaneously doing what Dylan is doing with the songs. As such, Determined to Stand is a hybrid of the two types of Dylan books. It’s the rare book that’s so unique in its ambition it reveals typology for the oversimplification it is, simply by existing. Again, just like Dylan himself.