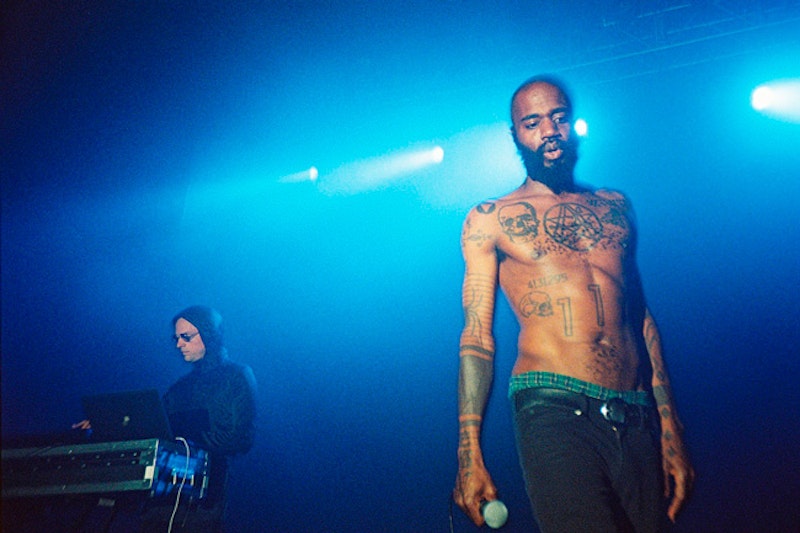 On “No Daze (Seattle),” L.A.’s Peter Kolovos teases out a guitar clinic imitative of an anime vine that sprouts thorns, balloons in size, and strangles an entire metropolis. There’s no central recurring riff or theme, just a general eagerness to garrote a chord or two until they mushroom or the resulting pressure pinballs into a rupture of sonar-like effects. A crumbling flatness undergirds these demented calisthenics, and as “No Daze” winds down Kolovos threatens to turn reflective on us, that yawning void rising to consume the whole in a way that’s more nuanced and measured than what came before.

Here these Lima, Ohioans grip a Santa Cruz stick and then spend six minutes grinding down the third rail. Sustain is the name of the game, that power electronics endurance shit where you pit gnawing feedback and steam hiss and static crackle up against one another, sometimes subtracting elements or inching up the volume or introducing new and painful extremes to fuck around with texture. So it strikes me as woodshedding of sorts, with panache, because the effect definitely lives up to the title: while you mentally trace the twists and turns of Methlab Explosion’s squealing noise, a pressure does build up and calcify, with no release awaiting you at the end.

The continuing paradox of Death Grips is the trio’s ability to alienate thoroughly while embracing a coliseum-level conventionality. A self-awareness of this reality perhaps helps to explain extra-musical shenanigans which often threaten to become the noise that drowns its signal: fake break-up announcements, NSFW album art, the blithe, last-minute cancellations of career-making tours. “Turned Off,” from Jenny Death, is emblematic of this. At its core is a catchy-as-Ebola buzzsaw guitar riff most traditional rock bands might sacrifice an Econoline full of groupies to possess. Death Grips spend almost five minutes actively subverting the impact of this riff. Zach Hill’s clamoring drums are foregrounded, Taser-like synthesizers are applied, and elements of song are looped apparently at random. Yet MC Ride serves as the primary disruptor, rapping with the intensity of a jackhammer and the coherence of a paranoid schizophrenic off his meds and presently at large. If “Turned Off” can be said to actually be about anything, the (indirect) theme might be the power of information overload to subjugate and enslave without leaving behind any fingerprints. Who, in fact, is “turned off”? Not MC Ride, but, rather, the collective “we.”