When You Feel Sad, You Can't Pout 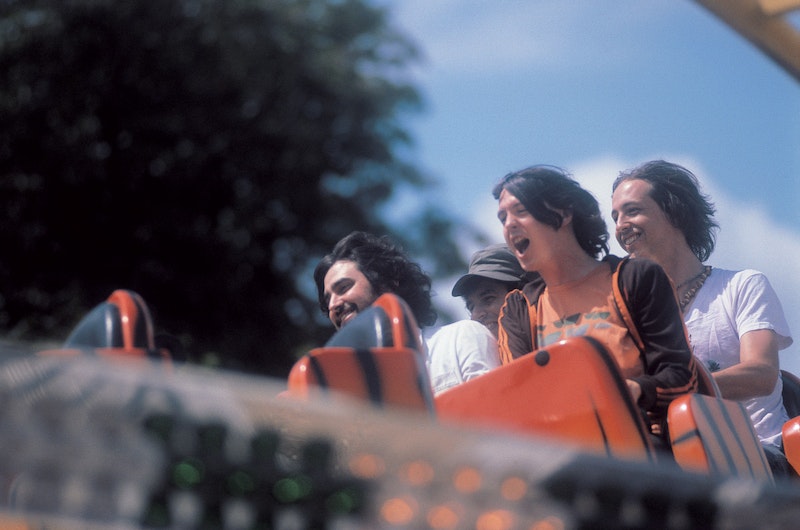 A quick scan of this list quickly makes it clear where my Animal Collective allegiances lie. Feels is where they peaked, and “Did You See The Words?” is the delirious, tune-drunk storm that opens their best album.

“Queen in my Pictures” and “Spirit They’ve Vanished” are in no hurry. They’re not going to conclude in three or four minutes. Maybe (in their unfinished forms) they run for a half hour each! They’re bizarre, discomforting, cozy. “Spirit” sounds like an extended Taser shock crossed with a rainbow; “Queen” is a big wobbly, warbling slice of strum. Animal Collective have come far enough careerwise that these songs probably register as embarrassing and amateurish, but last year’s Meeting of the Waters and what I’ve heard from the forthcoming Tangerine Reef suggest that they’re aware that it’s time to revisit this territory—this fertile, immersive territory—once again.

What if you tumbled into a bottomless well lined with rhythmically pulsating Infinity gems, but none of it was a cut-rate cartoon?

6. "Applesauce" (from Centipede Hz, 2012)—Centipede Hz was the first LP to truly shake the My Animal Home faithful’s faith, probably because the guys were really straining, and it showed; they came across like “try hards,” the term my son uses to refer to over-equipping, under-skilled players in some of his favorite online video-game. But for “Applesauce” at least, their mania is a virtue, resulting in this teeth-gnashing, piano-slamming prog rollercoaster.

“Leaf House” is where almost every Animal Collective-as-Lion King rip-off barb you’ve ever heard started. Even if there’s a sliver of truth there, Tare and Bear excel at their particular brand of basic/complex twee tribalism. Anyway, expect this beaut to surface in the 2054 edition of Suzuki Violin School: Violin Part, Vol. 5.

If you’re gonna get high and wander around town after dark, you should probably bring a friend along for safety.

It’s the whomping, whooping cascades of synthesizer, not the vocals really, that get to me. But there’s a point late in “Brother Sport,” after the three-minute mark when—and this is gonna sound weird—the singing members of Animal Collective sound like how I imagine Dan Aykroyd in Trading Places and his character’s pre-disgrace pals would sound if they tried to cover this song as a barbershop quartet. Does that make any sense?

True love is strange, and unknowable, and terrifying, no matter what age you happen to be when you experience it. There’s an intoxication to this feeling that “Flesh Canoe” embodies almost too perfectly, a overwhelming sense of communion; the melody exists as a string of massed instrumental sloshes that the vocals relax into contentedly without fear or concern or emphasized expression, because bodies are saying or have said everything that ultimately must be shared.

“The Softest Voice” seems to occur by accident, as though two acoustic guitar journeys and a web of crepusular effects somehow mapped perfectly and then two harmonizing voices lucked into finding it. Sometimes those voices are caught in a large, expanding glass bubble, as though we’re hearing two Donald Ducks; sometimes bells are creaks, and creaks are bells. Every single second of this minor masterwork of beauty and despair is beyond haunted.