This country needs a new song. 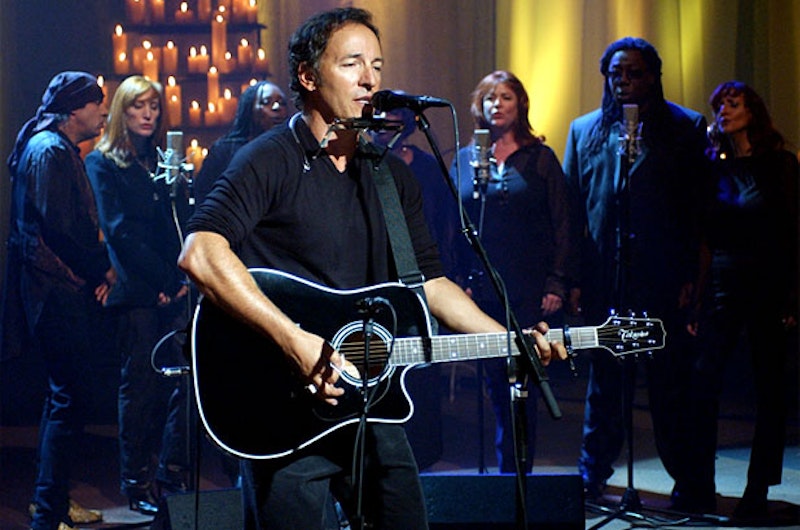 Great deeds will be done over the next 20 years; otherwise this country goes belly up. Those great deeds—greater than whatever happened near that fort in the War of 1812—will need songs, and I bet those songs have already been written. Do the great deeds and we’ll recognize the songs that go with them. Let me put it this way. I’m at the airport and there’s Bruce Springsteen. Me: “Man, you wrote the national anthem—we just got to pick it. You dig?” Bruce (with the chin beard): “Love you, brother.”

I was right in what I told my imaginary Bruce. Patriotism must begin a new stage, sort out a new identity. This country no longer knows who it is. It’s going to find out over the next two decades. We do know—we just haven’t realized—that there’s no point to “The Star-Spangled Banner,” the red-white-and-blue, the Framers’ perfection, the clapped-out apparatus used to simulate patriotic feeling. The people who love that stuff let Russia grope us. If they care about this nation, they have a funny way of showing it.

America’s going to find out if it can survive as a fully-functioning and independent nation, or else we’ll become a geo-cultural pile on the order of China between the Qing and communism. America will have to drive out traitors and remake a political system, and corral guns, and cure Wall Street of fleecing civilians, and keep the world’s climate system from falling sideways. Do all this and we’ll have earned some patriotism.

Right now we’re a country whose population shat itself. We’re living a joke, a prolonged goofy put-on that causes people to die. If the nation registers this fact, much may change. Here’s a possible direction. In 2026 a Latina-Chinese graduate of Berkeley is telling Wall Street what areas of the finance sector will stay non-government. Meanwhile, Air Force One flies into Orly for the summit about the ice cap; the band plays “The Rising” as the door opens.

Like any wise-ass predictions, these sound heavy-handed. One feels vulgar to entertain them. But Trump is president, and there’s a groaner of a premise; I bet young punks in the writers’ room got pelted with Styrofoam cups when they suggested it. No matter, reality is a vulgarian, and in this age he’s the dumbest fuck to watch TV news. He says President Trump, and maybe he’ll say Springsteen national anthem. The second time he’ll be right.

To think seriously about our country’s mid-range future is to think about absurd happenings. The same for the short term, of course. One can only hope the long term will have learned a lesson. But for now, and the next few decades, expect the goofy. Solids are turning squishy. Givens are budging. The right, having dragged us into the Trump moment, has created the possibility that we’ll emerge at some new curveball of a tangent. If we come out with “The Rising” as our national anthem, the America of the 21st century will have done something that makes sense.