When Radiohead Finally Found Their Way

Ok Computer is a prescient masterpiece. 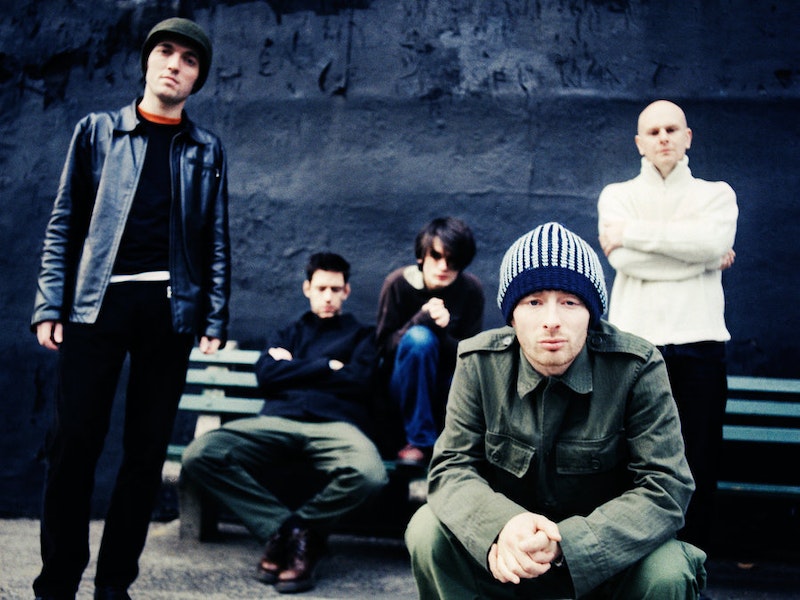 The release of the 20th anniversary edition of OK Computer, subtitled OKNOTOK 1997 2017, has driven home that Radiohead has entered the career stage where bands like R.E.M. and U2 were nearly two decades ago, a point at which many bands—hugely popular ones, at least—stop growing artistically and simply try to maintain their legacy. Fortunately, Radiohead is both smarter and better than that, as evidenced by the release of last year’s A Moon Shaped Pool, one of their best albums that, while not exactly boundary-pushing, was still miles better than most attempts from bands whose members are approaching 50. And that’s why the release of OKNOTOK feels a little strange, at least from the perspective of a longtime fan: It is a conscious look back at an era the band couldn’t wait to get beyond.

But reflections on the past need not be made with rose-tinted lenses, especially when considering an album that seemingly looked to the future with a sense of foreboding and trepidation. Much has been made of OK Computer‘s themes that, while not necessarily anti-technology, had a chilly view of society’s increasing reliance on and uncritical devotion to the machines that would accompany us into the 21st century and ostensibly make life better. Radiohead were far from the only artist of the 1990s to look to the oncoming century with skepticism (the trip-hop of the time mined similar emotional territory, with Tricky even naming an album Pre-Millennium Tension), but the band’s songs seemed to capture the kinds of emotions normally the domain of non-rock artists with the pathos of Thom Yorke’s angelic falsetto. Twenty years on and OK Computer proved to be prescient in its own era and at home in ours.

The trap many critics fall into over this album—the tendency to over-intellectualize and over-pontificate on its themes—is largely due to the fact that the album hangs together so well, perfectly sequenced as a set of songs that together form a greater whole. It may not be a concept album, as many critics mistakenly assumed upon its release, but it most assuredly is an album. Since first hearing it 20 years ago it has never been too far out of my reach, as the world has changed to all but confirm the worldview put forth by each of the album’s twelve songs. No matter what Thom Yorke may say—that his lyrical focus was on the increasing momentum of the contemporary world, or that it was all a reaction to the band’s relentless touring—the fact remains that he and his bandmates managed to singularly convey how it felt to live in a world on the verge of information overload. Alienation had rarely been conveyed by such a great set of songs.

The irony is that while the band may have had misgivings about the oncoming century, they were incredibly optimistic and open-minded about the future of popular music. The electronica of the mid-to-late ’90s was beginning to hit its peak around the release of OK Computer, and the album’s futuristic sound was duly noted by many critics at the time, a sound produced by incorporating such instruments as outdated computer arpeggiators (the bleeps at the end of “Let Down”) and mellotrons (“Exit Music,” “Lucky,” et al). Yet the album still managed to sound new. The band was hardly making a foray into the contemporary drum-and-bass rhythms as Bowie had done on Earthling earlier the same year, nor did they care much for the retro-futurism of their peers in Stereolab. Radiohead were concerned more with textures than rhythms, even as the opening track “Airbag,” with its DJ Shadow-inspired drum beat, might seem to refute that claim. Like Shadow, the band’s mode of operation was the re-appropriation of disparate influences to create something wholly their own. But despite all this, Radiohead were still very much a rock band, and OK Computer would be the last time they functioned as such in any traditional sense.

OKNOTOK marks the first time Radiohead have officially reissued the album with their approval, a crisp remaster presented alongside a thoughtfully sequenced second disc containing outtakes and b-sides. Those who have longed for a return to the sound of 1995’s The Bends will find cause for celebration in the previously unreleased studio versions of songs written as the band were still feeling out their next sound. As such, “I Promise,” “Man of War,” and “Lift” are closer to Bends b-sides “Talk Show Host” and “Bishop’s Robes” that presaged the sound of OK Computer, and in fact would fit better alongside those songs than they do opening this new disc. “I Promise” is too much a love song for OK Computer, and “Lift” too anthemic, too similar with The Bends lyrically that it isn’t surprising why it was abandoned so quickly. “Man of War” is one of the few anomalies in the band’s catalog, a conscious attempt to create a mock-Bond theme that would have been incongruous on either of the other two albums, a perfect compilation track that the band attempted and failed to record again in 1998 for The Avengers soundtrack. But incongruous or not, the songs are welcome additions to the band’s canon.

The rest of disc two’s previously released b-sides are mostly excellent, though nothing new for fans who collected the original singles and EPs, or more recently, listened to them on streaming services. “Palo Alto” and “Polyethylene (Parts 1&2)” are two of the band’s loudest assaults, featuring the three-guitar attack that they were still known for during this period (“Palo Alto,” originally titled “OK Computer,” has a wider quiet/loud dynamic than anything the Pixies ever recorded). Instrumental “Meeting in the Aisle” reveals the band may have been fans of early Simple Minds, Jonny Greenwood’s guitar textures winding like a double helix around its programmed beat. The slow burn of “A Reminder” is the band at their most dreamlike, featuring the same tremolo-heavy electric piano sound heard on “Subterranean Homesick Alien.” These songs were in many ways as inventive as the ones that made the album, even if a few of them feel like ideas the band weren’t quite sure how to complete: “Lull” is the kind of thing future Radiohead imitators would endlessly churn out, while the keyboards on the short and slight “Melatonin” paved the way for the band’s 21st century incarnation.

For me, OK Computer has always been where Radiohead finally found themselves as a band, even if they found it necessary to redefine themselves from scratch on their next album. Their status as guitar innovators would end along with the 20th century, while dozens of imitators would bid for the title in the early years of the next. It’s at once a transitional album and a defining statement, a work both of its time and one that stands outside it, and even as the era it succinctly encapsulates will one day pass away, we’ll always have the songs.