Get Up, Go Over, Turn This Tape Off 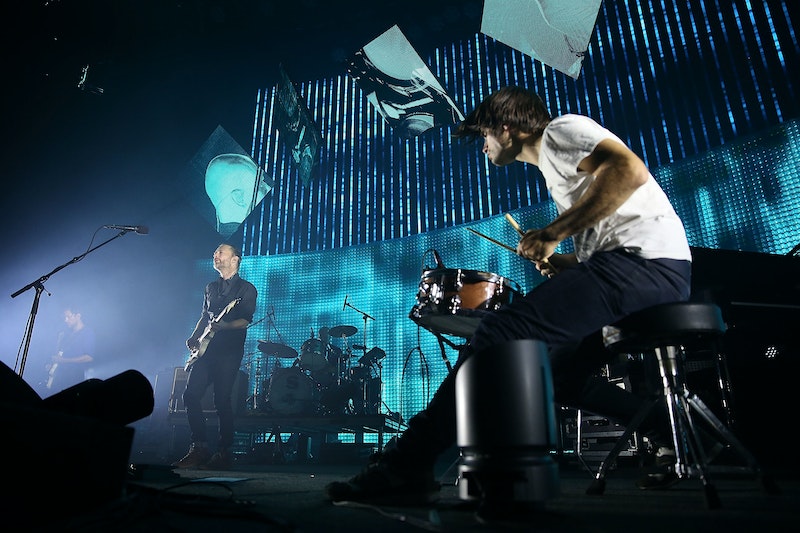 I’m semi-indifferent on Radiohead’s first three LPs, but after that, it’s off to the races, even if sometimes I can’t resist the temptation to make fun of these guys. Here are my favorite songs by a band that’s less one-dimensional than the tortured, self-serious stereotype fans and detractors like to embrace.

So Thom Yorke was cranking a lot of Autechre at this point, shouting out the duo in interviews and shit—then when interviewers would bring up Radiohead with Sean Booth and Rob Brown, they’d just dissemble. As potent as “Idioteque” was and remains, depending on one’s state of mind, it can mirror a prevalent worldview or verge on self-parody. In recent times, the former is more often the case.

More people join in on singing this song with each passing year, even if they’ve never actually heard it before.

Black Bloc agitators spoiling for the ultimate anti-globalist anthem got a washed out lullaby instead—something a drunk WWI doughboy might stumble through in a bar after clobbering the resident pianist.

It’s the lyrics, and the tone, and an endless, spiraling sense of free-fall—but it’s also something oppressive in those piles of blurry, claustrophobic keyboard chords that moves the Kid A version of “Morning Bell” to a higher level.

The absolute worst song to queue up when the gang’s karaoke night out transitions into one at-risk pal’s impromptu intervention.

If you opt to fixate on the outro—and I do—this might as well be Radiohead’s “Suspect Device.” Prior to that point, though, sentiments that question human connection are rendered moot by a stunned, stunning instrumental groove; it’s like having an intense conversation annihilated by a fantastic fireworks display you didn’t know was going to happen.

Really, what’s there to say about “Lotus Flower” beyond something like “this here is some dark, seeeeeexy Radiohead”? It’s a perfect pop single that arrived too late to actually conquer the world; its video is shameless, transfixing.

When I was a kid I used to imagine that the year 2000 would be insanely hot. That there’d be no ozone layer. That we’d never go outside without sunscreen on. That there’d be constant flash fires. For whatever reason, “Packt” always evokes this particular future—something, I guess, about how flat, flinty, and peevish it feels, how familiar, yet how inhuman at the same time.

The more of life you’ve seen, the harder “distance is like a weapon” hits as truth and the more facile “keep it light, keep it moving” scans as aspirational fluff—another story we tell ourselves in order to live through another bleak day. But “Present Tense” is so beautiful, so musically feathery—the shaker, the echoing, mildly psychedelic voices, the gentle spray of guitars—that life’s emotional darknesses are easier to swallow. Anyway, what would this song sound like if Korn covered it acoustically?

An imagined invincibility consumes masculinity, an inflated sense of immortality. The emotion at the center of “A Wolf at the Door” is that illusion shattering into a million shards. You’re not in complete control of your destiny; you can be injured physically or emotionally. You can be stripped bare and violated. Someday you’re gonna die, and there’s absolutely nothing you can do to prevent that from happening. This is the sound of surrendering, or acclimating to surrender—those crisp, composed early verses giving way to vocals that are more panicked and flailing at loose ends, adolescent carnival chords dissolving into the anxious, black-red swirls of early middle age. It doesn’t necessarily get better.