Whatever Happened to Brooke Valentine? 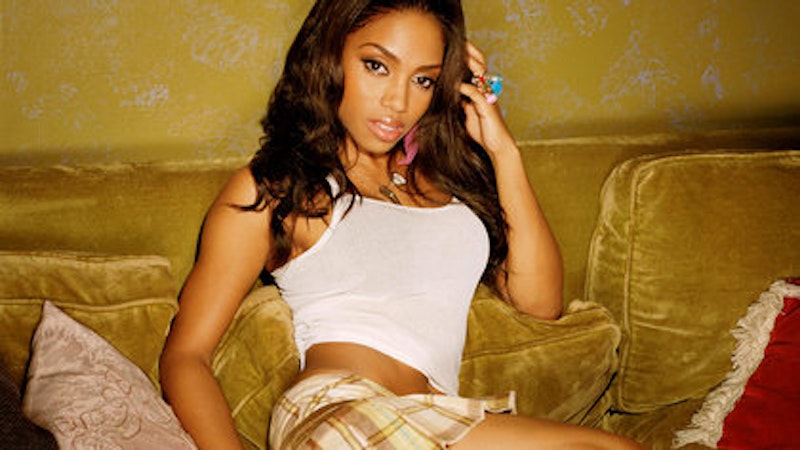 Brooke Valentine's 2005 Chain Letter is one of the greatest R&B albums of all time. The big hit, "Girlfight," was a conventional slab of crunk with great novelty tough-girl lyrics. The rest of the album, though, was all over the map, from the ominous hate-filled riot-grrrl-attitude grudge groove of "I Want You Dead"; to the honest-to-Hendrix, allow-me-to-jump-back-and-beat-Prince-to-death-with-the-flailing-body-of-George-Clinton funk of "The Thrill of the Chase"; to the breathy, psychedelic balladry of "Laugh Til I Cry." Ambitious, weird, and fearless in its certainty that contemporary R&B could mean absolutely anything if you were bad-ass enough to try, Valentine and producer Deja the Great made an album that should have taken over the world—and which was, instead, almost entirely ignored by everybody. After "Girlfight," Valentine's other singles stiffed, and she moved directly into the "Where are they now" obscurity reserved for one-hit wonders.

No follow-up album, of course, and there probably won't ever be one. But, undaunted, Valentine has continued to release the occasional mixtape. None of these have been as ambitious as Chain Letter. But they've been good enough to strongly suggest that the debut was not a fluke.

Her latest release, Love Letters, continues that streak. It sounds like she's got a production budget of about 30 bucks… not necessarily a bad thing. The first track, "MIA," shows her Houston roots. It's slow, cough-syrup-stoned, echoey—and did I mention slow? The beat sounds like some guy off in the corner is nodding off and jerking awake every few seconds to thwack a plastic tub a couple of times before conking out again. After the multi-tracked Valentine gets done singing in a tranced-out drone about how she's going to take your man, female rapper Naughty comes in to boast about her sexy mojo ("I pulls up, let the big body running/I hop out with my red bottom stunning,"), and then the track just sort of stops, like it ran out of space, or interest, or cash. "It is what it is," Brooke declares, and rarely has concupiscence sounded so thoroughly exhausted. It's flirtation as torpor, which is weird and cool and tough and more than a little glorious. Also, I'd guess, utterly commercially unviable.

But either Valentine is unaware that this is not a formula for Beyoncé-level success or she simply doesn't care. Either way, "MIA" sets the tone, and often the pace for the remainder of the album. "Love Song" sounds like a standard smooth soul ballad with cleverer than usual lyrics ("you're gonna change your name to mine/they're going to call you Mr. Valentine") and everything slowed down so you can nod to it when you're too tired to dance. "My Man" has a fuller sound, though that sound is more akin to retro ominous Blaxploitation than to the current radio brand of booty-shaking. Valentine's vocals are stronger than on her debut, I think, and while she doesn't have the hog-calling power of someone like Beyoncé, she works with her limits, hitting the bottom of her range and letting out the occasional wordless moan so that she comes across laid back (of course) and cool as hell. Someone also put up the money for a horn—or at least a horn sample—which echoes in the background like a mournful threat.

The big single is supposed to be "Don't Wanna Be in Love," with a verse from Valentine's fellow Houstonite Scarface. It's pretty good in a similar vein to the rest of the mixtape, except maybe a little more conventional. Not enough to get much in the way of airplay, though. Valentine's career is going nowhere. She seems determined to keep making great music anyway, though.