The song that introduced the blues to the general public. 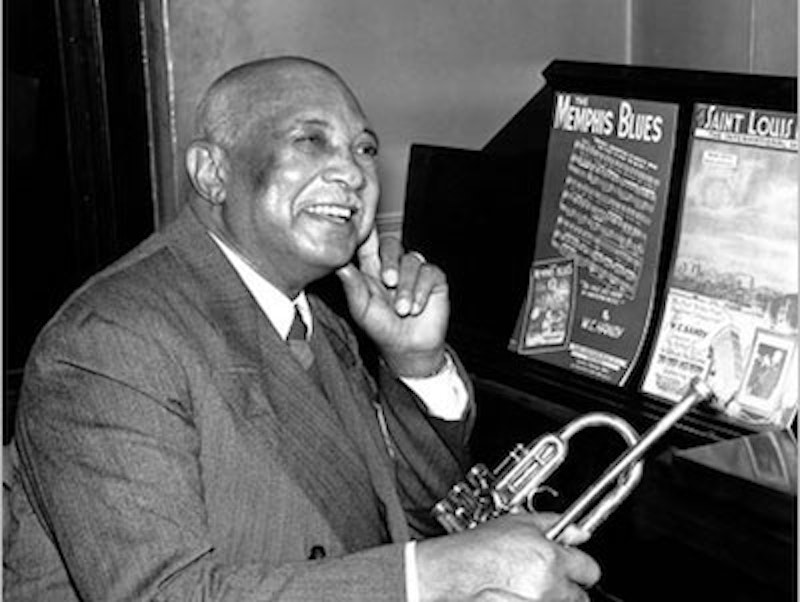 On September 27, 1912—106th years ago today—W.C. Handy self-published a composition called “Memphis Blues,” which is commonly called the first blues song. It started in 1903, when the band leader and composer got his first taste of some strange, haunting music when he brought the Mississippi-Delta-based band he was fronting, “The Colored Knights of Pythias,” to Tutwiler, Alabama and—as he detailed in his 1941 autobiography, Father of the Blues— encountered a “lean loose-jointed Negro” with a face that expressed “the sadness of the ages." The itinerant musician was playing a guitar at the railroad station, using a knife on the strings to produce a “slide” sound. Handy thought it was the “weirdest” music he’d ever heard, but it stuck with him.

When Handy moved to Memphis in 1909 (he’d eventually become that city’s first international star), he took memories of that sound with him, incorporating them into his music. Three years later, he published “Memphis Blues,” which became a major hit. But it wasn’t really the first blues song. That loose-jointed Negro in Tutwiler was playing the blues nine years earlier, the same style of music that African-Americans started singing in the previous century as they labored in the cotton fields. More accurately, “Memphis Blues” was the composition that took a musical style that had been previously confined to a strip of land between the Mississippi and Yazoo Rivers and introduced it to the general public.

Handy referred to “Memphis Blues,” published and recorded as an instrumental, as a "southern rag." One listen to the original version will explain that. It’s heavy on horns, with more of a “marching band” than a bluesy feel to it. A musicologist could tell you the recording contained “blue notes” and some innovative 12-bar sections instead of the standard 16, but even an avid music fan would be hard-pressed to hear even a faint echo of what major blues composers like Muddy Waters and Howlin’ Wolf would produce decades later. But listeners at the time heard something fresh and innovative. Before long, just about every dance band in dance halls throughout the nation was playing “Memphis Blues.”

If you skip ahead a couple of decades to 1936 and 1937, when Robert Johnson made his legendary recordings, you can hear a direct connection to what’s commonly considered a blues song now. What Muddy Waters, Howlin’ Wolf, Willie Dixon, John Lee Hooker, Elmore James, and other blues icons were playing in northern cities like Chicago and Detroit just a few years later was essentially a electrified version of Johnson’s Delta sound with the addition of bass, drums, piano, and sometimes harmonica. It happened in those cities because many Memphis blues artists migrated north after the city’s mayor, E.H. "Boss" Crump, went after Beale Street’s busy cocaine dealers, prostitutes, and gamblers, which closed down many of the businesses that supported musicians.

The black Chicago and Detroit bluesmen then spawned the generation of white devotees of the genre that emerged with great fanfare in the 1960s and 70s, a group that includes Eric Clapton, John Mayall and the Bluesbreakers, the Paul Butterfield Blues Band, Cream, the Rolling Stones, and Canned Heat. These new blues interpreters were able to reach white audiences that had always evaded their musical idols.

The savvy Handy probably decided that a straight-up Delta blues-style song would too much for the ears of the uninitiated to decipher, opting instead to sneak some of the genre’s elements into a more familiar, commercial musical form. The very next year, in 1913, Igor Stravinsky exercised no such caution when he debuted his avant-garde ballet, “Rite of Spring,” thereby blowing the minds of much of the Paris audience with his harmonic innovation. The cognitive disturbance was so marked that a brawl broke out in the theater. Bob Dylan experienced something similar in 1965, at the Newport Folk festival, when angry folkies booed his heretic decision to go electric.

Stravinsky and Dylan threw everything at their audiences at once, whereas W.C. Handy was more of blues “middleman,” which is not to minimize his transformative role in changing the face of popular music worldwide. What he played was distinct from the roots music that was marketed to blacks as “race music” and tailored to whites as “hillbilly music.” Handy's songs, unlike earlier black-influenced popular music, lacked the minstrel quality—mockery wasn’t his intention. He was responsible for a modern pop style that emerged in the 1910s and 20s. Much to Handy’s commercial benefit, this trend dovetailed with the sudden proliferation of dance halls for singles during that era. He’s even been credited with inspiring a new dance—the Foxtrot.

“The Father of the Blues” became a wealthy man by giving birth to a new blues industry that included white vaudevillians like Al Jolson, Emmet Miller and Sophie Tucker, as well as black performers such as Bessie Smith, Ma Rainey, Blind Lemon Jefferson, Papa Charlie Jackson, and Blind Blake. George Gershwin thanked Handy for helping him to write “Rhapsody in Blue." When Handy died at 85 on March 28, 1958, more than 25,000 mourners filled the streets around his funeral at Harlem’s Abyssinian Baptist Church.

In addition to all his music, W.C Handy also left behind this memorable quote: ”If anyone owned a dozen cans and piled them on a couple of shelves behind a printed sign, he was a grocer and a businessman. But anyone who contracted for musicians and played for parties over a dozen states was a good-timer and a rounder, if not worse.”