7 is an Old Town Rush Job

This hasty EP just proves Lil Nas X is going to ride that ‘til he can’t no more. 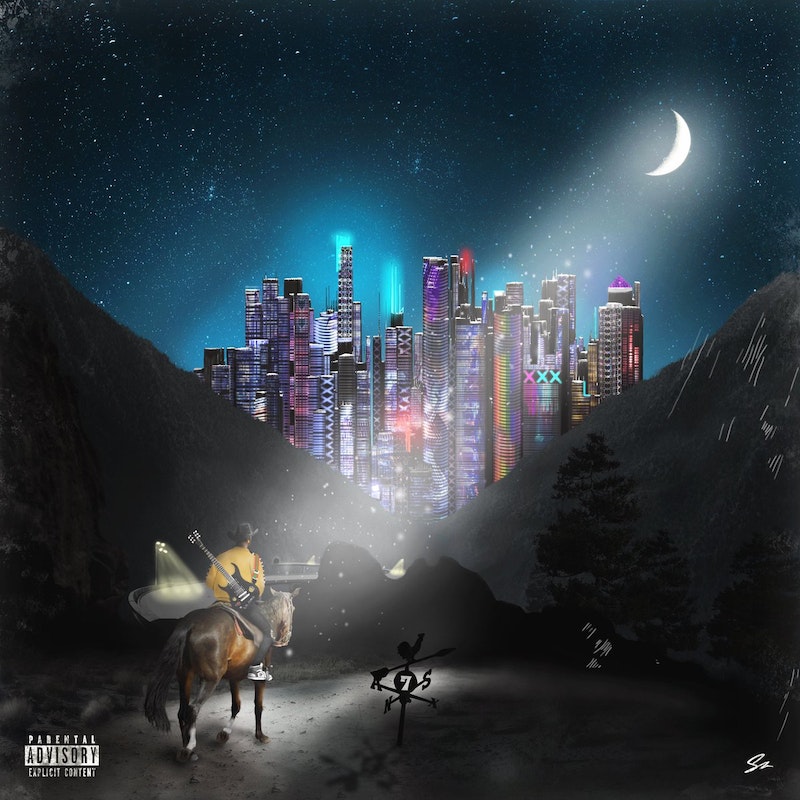 Where on earth did “Old Town Road” come from? It’s a great song. The remix features country star Billy Ray Cyrus, who’s best known for fathering Miley Cyrus, being satirized by “Weird Al” Yankovic, and having a cameo in Mulholland Drive. (Also, remember the controversy when Billy Ray Cyrus’ song “Achy-Breaky Heart” was dropped from the Billboard Country charts on the grounds that it was annoying.)

“Like a Marlboro Man, so I keep goin’ back,” sings Billy Ray Cyrus, who doesn’t have a clear recollection of the fact that the Marlboro Man eventually died of lung cancer. At the time of the Marlboro Man’s death and fall from iconic coolness, Cyrus was drinking heavily, and didn’t even know that his daughter was leading a double life as herself and “Hannah Montana.” He still has problems separating himself from opportunistic women who like expensive sports bras. In a now-famous public fight, aired on TMZ, Billy Ray can be heard yelling at his girlfriend, “No! I won’t buy you that Fendi sports bra! It’s TOO EXPENSIVE!”

“Old Town Road” is produced by YoungKio, who was sampling Nine Inch Nails, a fact that just gets weirder the longer you think about it. I don’t know why YoungKio, who nobody knows about, didn’t immediately reach an agreement with Lil Nas X to produce everything on X’s new EP, but there’s absolutely nothing else on the EP that sounds even remotely like “Old Town Road.” There are assorted little (sorry, “lil”) yelps at the beginning of every song, and there’s some kind of bass drop on several tracks, but nothing has the same depth or interest, with the possible exception of “Rodeo” featuring Cardi B. Nothing else is really country (not even “Rodeo,” unless you count the title). Nothing else has much swagger.

But before we get to Cardi’s guest spot, which is so bland that I’m never actually going to discuss it, can we talk for a second about how stupid Lil Nas X’s name is? First, there’s already a rapper named Nas. So there’s almost no difference between calling yourself “Lil Nas X” and calling yourself, for instance, “Lil Young Thug X,” or even better, “Lil Lil Wayne X.” And then—what is the X doing there? Is it proving to us that he, Lil Nas X, realizes an album called Illmatic dropped once upon a time? Because that is actually pretty decent of Nas. I mean Lil Nas. I mean Lil Nas X.

Admittedly, there were signs on “Old Town Road” that Lil Nas X didn’t have staying power. For example, at one point, he cheats on his baby, “you can go and ask her.” That’s okay, Lil Nas X. I believe you. We don’t need to bring your baby into this by asking her questions that would be unnecessarily traumatic. He’s also “riding on a tractor/lean all in on my bladder,” a line that paints a gritty, realistic picture of the discomforts modern tractors have yet to eliminate.

Having listened to this EP numerous times, in a quiet library, with expensive headphones, while breaking a wild mustang horse and making it pull my Maserati sports car, I know more about Lil Nas X than I ever wanted to. On the second track, exactly when we’re ready for “Rodeo,” he busts out with “say to me, what you want from me,” and it’s so off-key that Auto-Tune is rendered jaw-droppingly helpless. What the hell is this, couples therapy? Is Lil Nas X working on his communication skills when he should be celebrating his incredible ubiquity by having foursomes every night? Such questions probably can’t be answered yet. But things get worse.

On the aptly-named “Kick It,” which is not really about anything, Lil Nas X gives us an unappetizing taste of his marketing skills as a small-time weed dealer. “If you neeeeeeed weeeeeed, get it from meeeee,” he sings. (I think that’s what he’s singing. The production is blurrier than Monet at a distance of one inch.) Then he yelps, “It’s good!” Oh, is it? Is it GOOD? Then I guess I’ll buy a whole dime bag from you, Lil Nas X, instead of taking my business down the street.

I’ve already mentioned “Rodeo” several times, but I’ve failed to mention lines from that song, like “I don’t mean to make you mad/I don’t like when you upset,” which go a long way towards proving that Lil Nas X is one hell of a lukewarm wet noodle. “I’m-a take you from this party, we might go and have some sex” is a line saved by the word “might,” which is still probably too optimistic. I don’t think his girl spent that night leaning on his bladder, like a tractor, if you know what I mean. Perhaps she was too upset about being semi-kidnapped. “We lit like cigarettes,” Lil Nas X explains; although he’s only 20 years old, he’s already mastered the single entendre.

When I contacted Lil Nas X for an interview about his EP, his only reply was a sample from “Kick It”: “It’s good!” No, Lil Nas X. It isn’t good. The only worthwhile thing you’ve done is “Old Town Road.” This hasty, concept-free EP just proves you’re going to ride that ‘til you can’t no more.