Up Extra Hours with The Rysing Suns

A brief history of Dundalk's most exalted teen rock icons. 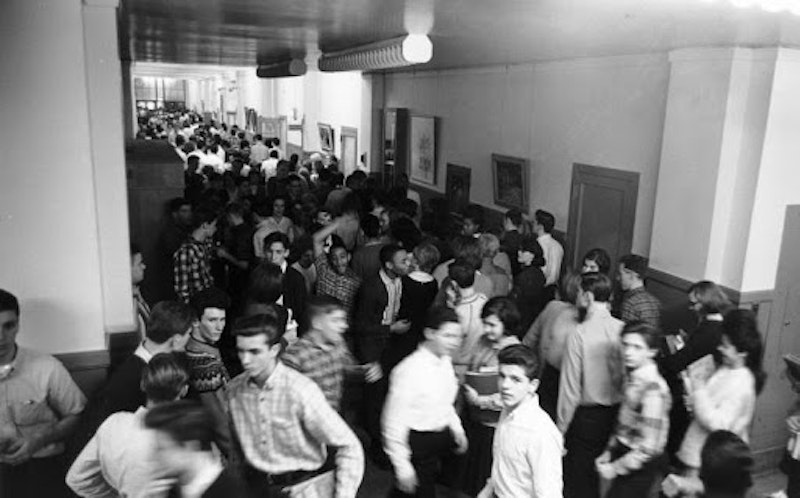 The preceding lines come from The Rysing Suns’ “A Third Hour On 40-11th Street,” one of the most brutal cuts from Dome Records’ 1966 various artists compilation Baltimore’s Teen Beat A Go Go. The group’s lead singer Dave Collins said he wrote these words about the decadence and degenerative effects of drug abuse. He also claimed that it was a random meditation, just a stream-of-consciousness rant written about everything and nothing in particular. This snarling lyrical abstraction and the chaotic sounds that accompany it form an enduring testament to the youth culture’s war against suburban boredom. The only thing crazier than the song itself is the five-year adventure that transformed The Rysing Suns into Dundalk, Maryland’s most exalted teen rock titans.

The Suns’ story begins several hundred miles south of the Mason-Dixon Line down in Knoxville, TN. From their earliest days juvenile delinquency was at the root of the band’s loud mania. Collins spent the early-1960s living with his father in Knoxville shortly after his parents’ divorce. One night in 1964 Collins broke curfew and attempted to sneak back into his home through an open window. The ploy failed and the elder Collins woke up enraged. A shouting match ensued which ended when Dave announced he was leaving the South for good, heading up to Maryland to live with his mother at her new home in Dundalk.

After the move Collins began attending Dundalk Senior High School in the fall of ‘64. The 15-year-old formed a few short-lived groups with guitarist Sid Kramer, a kid he met in his homeroom class. First came a quartet called The Huns (which also featured Dundalk students Don Teetaman and Chuck Madison), and then came a nameless project with two thirtysomething pro-musicians—a bass player named Doug and an accomplished guitarist named Butch who Collins described as “a Puerto Rican guy with a missing finger. The guy played great, really good… we did some Beatles stuff and some older Little Richard stuff.”

Uninterested in being Butch and Doug’s sidekicks, in late ‘64 Dave and Sid started up a new group with musicians their own age. The new combo included two more Dundalk High students, keyboardist Steve Boyle and drummer Charlie Maroburly. Boyle secured his position in the group after his mom volunteered him for the job. The Kramers and Boyles lived on the same block, so it was nothing more than friendly neighborhood small talk that brought Steve to the attention of Dave and Sid. The keyboardist’s musical origins were atypical compared to those of average 1960s rockers. When Boyle was seven, the unexpected arrival of a persuasive door-to-door accordion salesman set the spark that turned him into a master of the dissonant organ drone that’d go on to become a Rysing Suns signature.

The next line-up acquisition was lead guitarist Frank Cantazeritti, a kid Collins knew initially as a fierce basketball rival from gym class and pick-up games at Dundalk. Dave Collins: “We did “Louie, Louie” and he knew the guitar solo to it, so we said, “You got the job if you want it!”

The quintet’s main influence was English rock. Their goals were simple: get wild, have a good time, and get as much groupie action as possible. Other than The Beatles, in ‘64 no band was more synonymous with savage rock ’n’ roll and hormone-crazed hedonism than The Rolling Stones. The Brit group’s repertoire proved to be the biggest shared music obsession for The Suns who became well known as one of the earliest Maryland bands to perform obscure Stones deep cuts just often as the hits. Their animated live shows featured lead singer Collins out-snarling Jagger note for snotty note.

From 1964 to 1969 Cantazeritti, Kramer, Boyle, and Collins formed the nucleus of The Rysing Suns. During their first year and a half they performed and recorded without a bass player. Over the years a total of four drummers and three bassists came in and out of the band. The first drummer to fall from grace was Charlie Maroburly who only practiced with them for a few months. His exit was bizarre and dramatic.

Dave Collins: ‘There was some contention at a rehearsal about the music we were doing and he just stops (playing) in mid-song and walks out. And we’re like, ‘What the hell’s going on?’ He comes back, he sits down at his drum kit, and he’s eating chocolate pudding! I said, ‘Charlie, what’s going on?’ And he goes, ‘I was hungry.’ We got into a big verbal fight and he went out and came back with a butcher knife! And I was like, ‘Well what the hell are you gonna do with that?’ I kicked it out of his hand. I guess we figured we really didn’t want anyone in the band who was gonna pull knives on us and that was it."