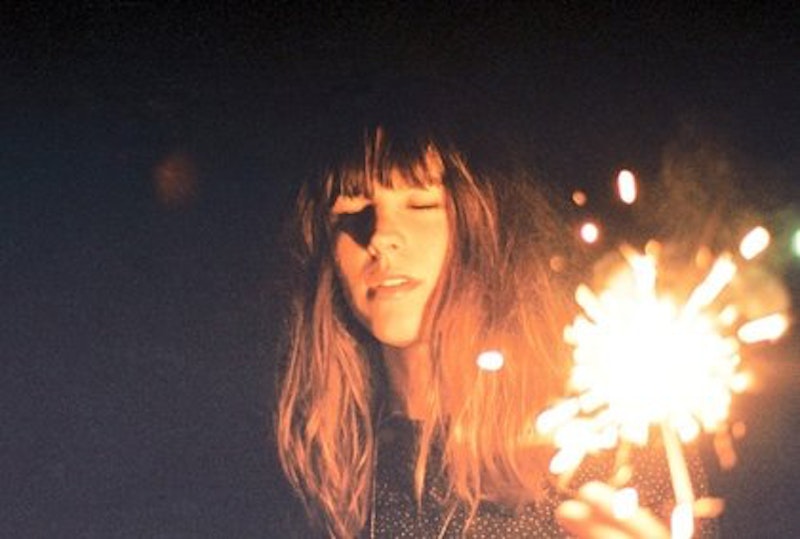 Melody Prochet scares me, and I’ll tell you why. It’s mostly that this French newcomer is simply too alluring stylistically, playing by some or all of the rules that govern my idea of what indie-rock should be about in 2012: gauzy, palpable hooks; wan, dissolving vocals; keyboards and programmed beats swarmed by distortion and submerged in the nastiest feedback. Divine and damned, and not trying too hard, and, you know, she’s just getting started—which means that I feel like I’m getting set up for a fall come sophomore album time when Prochet has undergone some sort of Catholic-level revelation where being half-noise-dudette is no longer cool.

But let’s live in the now, shall we? I have no idea what “Crystallized” is even about, and I don’t care, in the same way that Maserati drivers don’t give a shit about the economic straits suffered by valets. Clicking play on “Crystallized” is like stumbling down a hallway in an old musty, rundown motel and opening a door to a land full of sunshine and rainbows and unicorns: the air is crisp and crackling, the dueling guitar lines plangent and Santa Barbara, odd effects and babble erupting inaudibly from the bowels of the mix, drums snapping and popping, Prochet’s rippled, mountain-stream vocals offering a through-line confidently guiding us forward through a gathering storm of distortion.

And then—and then—bonus, the last minute and change gear-shifts into a crude kraut-rock space jam more or less ripped off from Helium’s The Magic City, which more people should seriously consider using as a reference point.

On the evidence of “Florida,” Michael Zapruder’s gig seems to be turning other people’s poetry into uncomfortable songs, nice work if you can get it, really. Here, it helps that Travis Nichols’ original is itself so burnt and distended, like a ‘luded retelling of a retelling of dream somebody else overheard some dude pop off about around a haunted beach campfire. Zapruder frames it the way Matthew Friedberger would: big sad guitar chords, organ cheese, vaguely thrown-up enunciations (think Bobcat Goldthwaite). All of which is another way of saying that this sounds like a subdued David Geddes anti-hit, what with the speaker’s weird remove from the childhood paranoia and horror the narrative drips with. But I do enjoy the sense that “Florida” wipes out just at or maybe before the point where we should be listening through our fingers, making all kinds of involuntarily ludicrous patented Three Stooges sounds.

Elizabeth Veldon, “Regarding The Pain of Others”

Don’t bother asking me to direct you to the page in Susan Sontag’s war/atrocity photography treatise where this passage appears, nor will I map out where it fits into her larger argument. I will not help you because it behooves you to set aside two hours of reading time and to seek out Regarding The Pain of Others from your local library or bookseller. Her theme extends beyond our complicity in absorbing these images to their general misrepresentation and harnessing as political propaganda, and included the long, sorted history of the evolution of war photography; you owe it to yourself to devote some time to it.

Here, U.K. sonic spelunker Veldon loops an earnest reading of nightmarish inhumanity (with a porridge-thick Scottish accent that never fails to give me Trainspotting flashbacks) valiantly and cunningly, stitching the loops shut in such a way that the seams don’t show, allowing us to become inured to the speaker’s lilts and vagaries. Midway through the piece, the vocals begin to descend into a wading pool of reverb that muddles and multiplies syllables and pauses alike, until polemic is reduced, literally, to echo-chamber noise. Eventually the loops ascend, of course, confronting us obliquely with purpose of this auditory exercise.

“Regarding The Pain Of Others” was posted online on the 11th anniversary of 9/11, alongside an image of the Twin Towers burning. It’s quiet lesson? Repetition, verbal or militaristic or otherwise, can have the effect of dulling and colonizing our senses, until the process of assigning significance to events and remarks itself becomes a casualty. Nothing remains sacred, but nobody really notices or cares, if we ever did to begin with.