Sins In the Corporate Almshouse 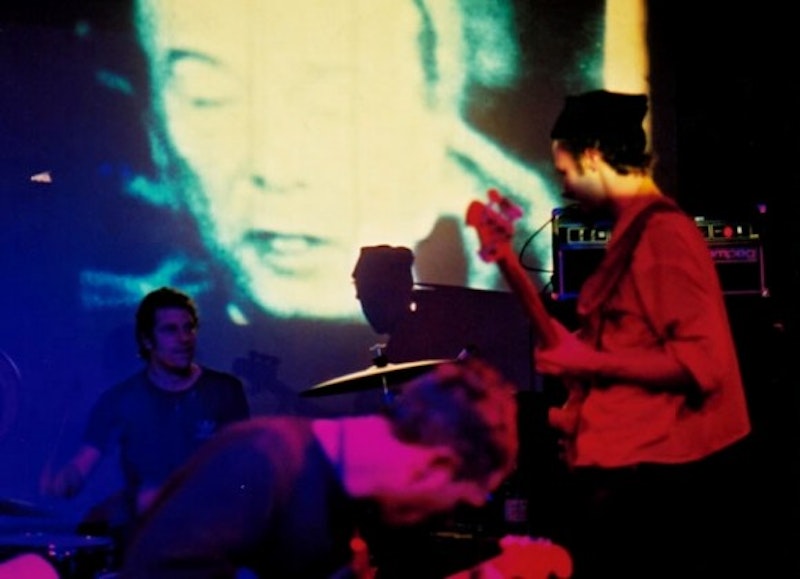 Baltimore’s Rams Head is a weird place to see Godspeed You! Black Emperor. The instrumental/orchestral rock band with 10 members and a titanic, apocalyptic sound returned after a long hiatus just under two years ago, and after a decade of no new material, they silently released a new record, ‘Allelujah! Don’t Bend! Ascend!,  at their Boston show on Monday. These updated and “evolved” versions of ancient staples “Albanian” and “Gamelan” are available exclusively at their shows until the end of the month. It’s a noble move to release something without any notice these days when a leak is practically inevitable, but by Tuesday ‘Allelujah! was already very easy to find online. It was a word that kept popping up in my head last night at Rams Head—defanged. Godspeed’s music remains heady and dark as ever, but their ethos—anarchistic, anti-corporate, viciously opposed to and viscerally terrified of the New World Order—didn’t exactly make sense in a club ensconced in a Disneyland hell-pool tourist trap, with chicken fingers, $10 Budweiser, and obliviously drunk walk-ins.

Zomes opened with a 40-minute set of gently oscillating and warm, rounded keyboard drone, agitating a crowd I’d expected would embrace Asa Osbourne’s meditative, regal repetitions. But no: the coked-up backwards baseball cap buffoon next to me, clutching a Godspeed LP no less, moaned “that was horrible… I’m a fan of music, but not that much of a fan.” What does that even mean? I really don’t understand how you can be a massive GY!BE fan, correctly identify every song they play (five in an hour and a half), and think of Zomes as “beyond horrible,” because it’s basically the same sound: melancholy drone. Maybe it’s the drums—dude was also a big Rush fan. Anyway, the schism between the serious, smoldering intent of the group onstage and the fecklessness of the crowd was …uncomfortable.

Godspeed played the new record in full, and it’s a blistering pair of pieces, an even more chaotic and concise version of the Yanqui U.X.O. sound—I’ve heard it being referred to as their “instrumental metal” album. Sandwiched in the middle was “Monheim,” the panic and anxiety driven movement from Lift Your Skinny Fists’ “Sleep.” It was surprising how accurate and faithful the band’s renditions were, right down to the tone of Efrim Menuck’s wailing-for-life noise guitar leading the procession into a wet, unmarked grave. Despite the surroundings it wasn’t hard to lose yourself in Godspeed’s mournful and massive sound—the sheer number of musicians on stage and the density of their death march allows you to shift your focus and listen for what different things are doing in the same piece. I’d quickly pay 20 bucks for a sanctioned live recording of the show, but somehow I doubt GY!BE would allow themselves such a capitalist move. Despite the fact that they sell merchandise and play in venues with David Lee Roth quotes on the wall and half a dozen outdoor theme bars right outside.

Hearing Efrim Menuck bemoan “the sin of U2” and why Arcade Fire’s chords are “manipulative” and their lyrics “hollow” is sort of depressing, because it’s not as if the dude or his multiple bands are above the Fortune 500 trappings of major acts. They play gaudy corporate owned and branded venues for a sizeable guarantee, tour in a Prevost bus, and frequently utilize big business services and goods. Problem? I don’t see any, but you can’t bitch about how Arcade Fire are nothing to look up to when you’re guilty of the same “sins.” I still love Godspeed and their music is as vital and alive as ever, but the activist and apocalyptic spirit of their music is heavily diluted when they submit to the same machinations they used to rail against, and that’s what made their music even more powerful.