The Allure of the Obsolete 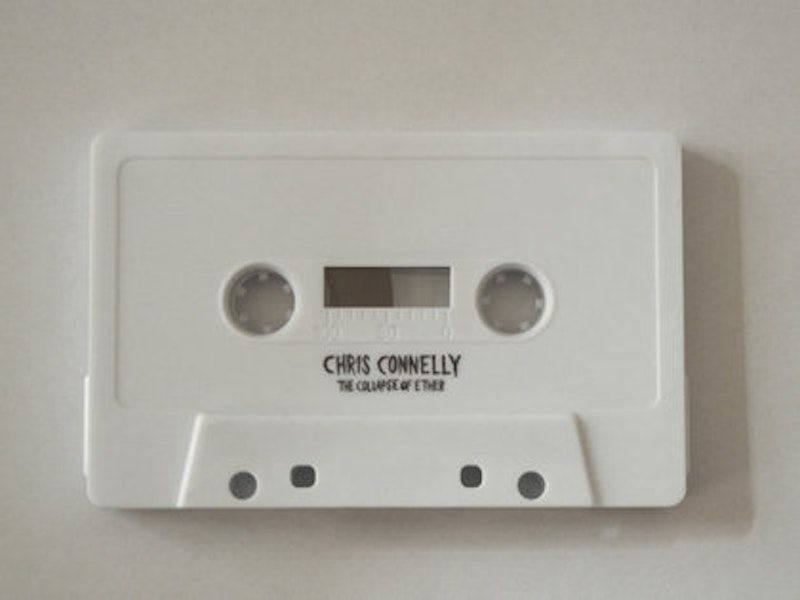 Obsolete technology lives on as a nostalgic echo of itself; the past's shiny future turned into the present's sepia-tinged twee romance. The crew of Kirk's Enterprise, forever sliding levers and turning dials, are not so much dated as repackaged. They become subcultural consumable—the perfect signifier for our ever-accelerating  Balkanized culture of micro-memes.

As it once did to dials, so digital has now done to cassettes. Analog is dead… but thus lives analog. The manifest unwieldiness, fragility, audio insufficiency, and general crappiness of the sound-delivery system can all now be forgotten and forgiven. Utilitarian concerns cheerfully unspool and are rewound again around the nostalgic fetish. And thus we have Tapeworm; a label devoted to the hip anachronistic production of cassette-only albums.

One of Tapeworm's most recent releases is ex-Revolting Cocks, ex-Ministry alt rocker Chris Connelly's The Collapse of Ether. The project, consisting solely of voice, piano, and the manipulation of both, seems designed expressly as a combined tribute to and mockery of its own format. The piano parts were recorded at high speed way back in 1990, at a time when people hadn't entirely stopped listening to cassettes. Vocals were added in 2012 over the piano parts played backwards. That's the first side of the tape. The second is the same thing only reversed, so the piano plays right through and the vocals run backwards. Connelly, then, deliberately makes use of the cassettes analog qualities, the way tape can run slower and faster and the way it can spool in one direction, then the other.

The joke, though, is that the 30-year gestation period, the careful sonic manipulation, and the conceptual linking of format and content, result not in a tour de force, but in an auditory artifact that verges on self-parody. Both sides of the tape, forward and backward, sound for all intents and purposes identical... and that sound is elaborately and deliberately unlistenable in the way a damaged cassette is unlistenable. The quality is muddy and disjointed, the sloooowed down piano (forwards or backwards) a clanging, aimless din, like a particularly industrious toddler with a spoon assaulting a boiler two stories down. The vocals (again in either direction) are inarticulate—slurred and warped low end gibberish, moans, and howls that, at this point in history, don't suggest demon speech so much as 70s film tropes standing in for demon speech. If early hip-hop celebrated the vast vinyl past as a heterogeneous assemblage of unexpectedly vibrant surprises, Connelly's album seems to figure the entirety of music on cassette as a undifferentiated, melted blob, slowly and painfully returning to the petroleum byproduct from whence it came. Fleetwood Mac, Mariah Carey, Metallica and Rick James will all go into the oily gelatinous stew together for one final droning atonal mash-up.

Again, this vision of cassette apocalypse can be read as an ironic wink, but it's not exactly clear that that was Connelly's intent. On the contrary, the project is dedicated to "the innocent victims of the regimes in Chechnya and Ingusheta," which indicates that Connelly is taking himself quite seriously. The Collapse of Ether is not cutesy pop music, but high art meaningfulness, and that meaningfulness is underlined by the obsolescence of the delivery system.

There was a time not too long ago when cassettes were synonymous with cheap crap—so much so that when my wife is telling anecdotes to illustrate the debasement of her most debased ex, she talks about how he once peed in the salad bar at Denny's and how he would regularly break into people's cars to steal their tapes so he could record his own music over them. But time has changed all that. By losing its function, the cassette has gained a mystic aura, whether as insider cool collectible, or as portentous avant-garde declamation. The Collapse of Ether isn't all that much fun to listen to, but then, cassettes aren't supposed to be fun anymore. They're supposed to be totems; reminders of those old rituals (like press eject) around which some ancient peoples—or so legend has it—are supposed to have organized their lives.