Radiohead and Will Oldham have garnered attention recently for their embrace of YouTube-era technology, but it’s their musical developments that keep them relevant. Trent Reznor could stand to learn from them. 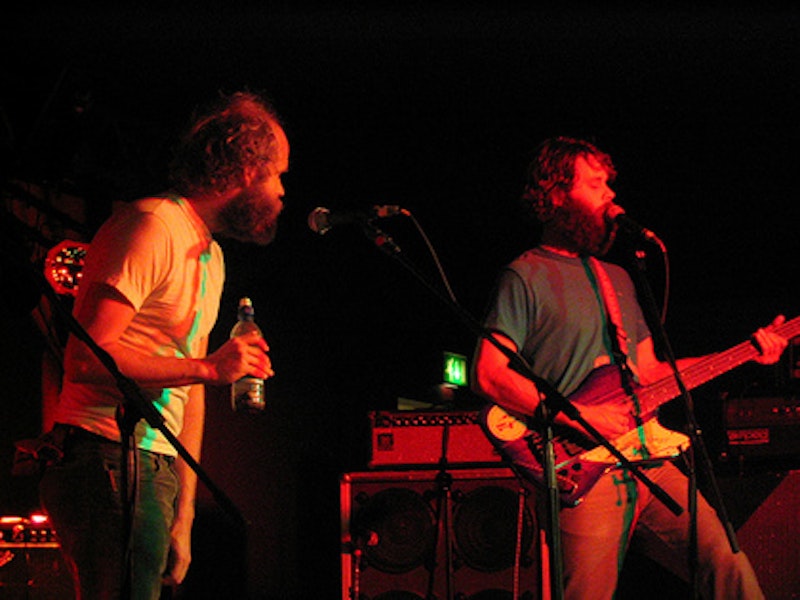 Nine Inch Nails may have done it first, but Radiohead made the “pay what you want” surprise release of In Rainbows the big music event of the last year, leaving Trent Reznor to do what he does best: mope in public. Was this only a moment of one-upmanship, of a band with a decade of sustained record sales and widely perceived relevance shining brighter lights on an idea than a band that seems stuck in 1998? I’m not going to hate on NIN: I’m still very much attached to songs from The Downward Spiral and “I’m Afraid of Americans,” which Reznor produced for David Bowie (with the hilariously creepy stalker video). But it’s shortsighted to say the release format was the only important thing about In Rainbows, and doesn’t give credit to the record’s enormous emotional range. It is this sea change in tone that is really important, that sets Radiohead apart from Nine Inch Nails.

I’m not breaking new critical ground here: Mark Pytlik, writing for Pitchfork Media, used a variety of compound adjectives to describe the songs, including “user-friendly,” “big-hearted,” and the unwieldy “R.E.M.-shaped,” which conjures dome-like skulls more than anything. And “user-friendly”? Ten years on, this is the Radiohead who wrote “Climbing Up the Walls,” which ends with ravaging feedback and Thom Yorke screaming through the cavity of his acoustic guitar. In The Guardian, Alexis Petridis called In Rainbows a triumph before even hearing it, and proceeded to describe “All I Need” as “witty, romantic, life-affirming.” Again, this is the band that rose to great heights by moaning “when I am king, you will be first against the wall” and “you’re so fucking special.”

The critics certainly aren’t wrong about the emotional immediacy of In Rainbows. One of the most striking moments is in “Videotape,” when Yorke sings slowly, as if he’s just writing the words down, “Today has been the most perfect day I’ve ever seen.” The first time I heard the line (jittery after the fifth cup of coffee, having woken up before dawn to download), it hit a false note: this borderline cliché is in a Radiohead song? The more I listened, though, the more I believed it. The line is not new, but Yorke’s delivery shows him believing the simple truth of this truism. “Videotape” demonstrates the new development in his songwriting: the only thing you take from this life is CC-TV videotape, but there is, if not heaven, hope, and there were beautiful days.

I would not rehash last fall’s discussions of Radiohead—the album’s out in its physical form, their tour is halfway over—if not for the similar feelings I’ve gotten from the release of Bonnie “Prince” Billy’s new album, Lie Down in the Light. The bands aren’t especially alike in sound, though both have a penchant for darkness that can be frightening at times. And in both cases, you don’t even have to hear the albums to see a change in approach. In the post-YouTube world an album can no longer stand on its own, something Radiohead and Bonnie “Prince” Billy have gotten. Radiohead started doing webcasts in the Kid A era, but their most recent “Scotch Mist” webcast shows a goofier side. They play a really great Smiths cover, attach cameras to bike helmets for “Jigsaw Falling into Place,” and in-between there are odd blips of the band running from fireworks, in slow motion. Guitarist Ed O’Brien said recently that people don’t know “there’s actually a great sense of humour in the band.” It seems he may be right.

Will Oldham (who uses Bonnie “Prince” Billy for one of his many monikers) has made fewer videos over his career, but he made some YouTube-based commercials for his last record, The Letting Go, in which he played a lounge singer, entering the no-man’s land between David Lynch and Spike Jonze. Not so long before his new album came out, Oldham starred with Zach Galifianakis in an infamous cover video of Kanye West’s “Can’t Tell Me Nothin” that was produced by the rapper himself. More recently, in a YouTube trailer, Oldham took hallucinogenic mushrooms with filmmaker Caveh Zahedi as a part of his “documentary” Tripping with Caveh, to pretty hilarious effect.

Apart from penchants for dark subject matter and goofy videos, Radiohead and Bonnie “Prince” Billy do share a technique. Both acts take the sounds of established genres—arena rock and ambient techno in one case, Americana and art rock in the other—and make them strange. On their new records, though, for once the strangeness does not come from the dark. There was nothing special about the release of Lie Down in the Light—it’s all in the sensation of listening to the album. Like In Rainbows, one listens to Lie Down in the Light and feels that the artist has been unburdened somehow.

But that comes after the initial listen. On first hearing “Easy Does It,” the first track, I felt a similar “What the hell is going on?” sensation, like I did on hearing “Nude.” Both songs have a buoyancy, not a regular feature in either act’s previous work, and a new sense of melodic expansiveness. Oldham does not have Yorke’s range, but “Easy Does It” shows him testing his limits and sounding relaxed doing it. He’s still obsessed with religion, death, and sex, but Oldham doesn’t have the misanthropic edge he did on Viva Last Blues (playing as Palace Music) or on his strange masterpiece, I See a Darkness. Though the second track “You Remind Me of Something” has a taut groove similar to his earlier work, for the most part Lie Down in the Light sounds like it was laid down with minimal rehearsal (an Oldham trademark), with musicians who relate to the singer intuitively, on the back porch somewhere in Appalachia. Looking at the liner notes, that about sums it up: Oldham’s from Louisville, and his brother Paul helped to produce the record.

Just like you need to listen to OK Computer or Kid A on the heels of In Rainbows to really get the change in tone, you need to listen to Lie Down in the Light in close succession with I See a Darkness or even Oldham’s last full-length, The Letting Go. Hey, you could even mix back catalogues: compare the clarinet (care of the late Humphrey Lyttleton’s band) in Radiohead’s “Life in a Glasshouse,” from Amnesiac, to that in Oldham’s “For Every Field There’s a Mole.” Talk about difference in tone: in the Radiohead song the clarinet takes the lead in a funeral dirge, but in Oldham’s the clarinet lends warm sophistication to his nursery rhyme-simple lyrics. There’s evidence of a momentary shift in Oldham’s sensibility in “You Remind Me of Something” when he sings “I like the places where the night does not mean an end.” There is a marked difference from I See a Darkness, an album much preoccupied with darkness in many forms: “Black you are my enemy and I cannot get close to thee, our life is ruled by enmity and I can’t weaken that.” Rather than contemplate violence and despair, this new record shows Oldham thinking of “songs that do not end,” and of following God around rather than vice versa in the hymnlike closer “I’ll Be Glad.” I think I’ve kept referring to him as Will Oldham here because Lie Down in the Light is a far more intimate, relaxed album than his last, The Letting Go (though I prefer Dawn McCarthy as his singing partner on that record to Ashley Webber here). In these inviting songs, the distance between man, moniker and audience is collapsed.

So why the sudden change from two artists who have established themselves among the great sad-sack innovators of this decade? You could put it down to the cultural shift between the release of OK Computer and I See a Darkness, In Rainbows and Lie Down in the Light: boom times need dissenting voices, and right now we need to hope for better. But only saying that would be reductive. The thing is, Radiohead albums don’t ever sound exactly alike, and neither do Will Oldham’s in his various incarnations. These are artists who itch to change their sound constantly, and their next records may be as blackly exciting as those from a decade ago. It’s this restlessness that produces interesting music—the musicians’ ability to lure you into thinking you know what you want from them and then switch back on you. I like knowing that now I can turn to Radiohead or Bonnie “Prince” Billy for a dose of something strange and dark, or for something strangely consoling.

Hard copies of Radiohead’s In Rainbows are out from XL Recordings, and Bonnie “Prince” Billy’s Lie Down in the Light is out from Drag City Records