No Longer Passed Over

Warts and all, an interview with Mark Kozelek of Red House Painters and Sun Kil Moon, and a review of his recent acoustic show. 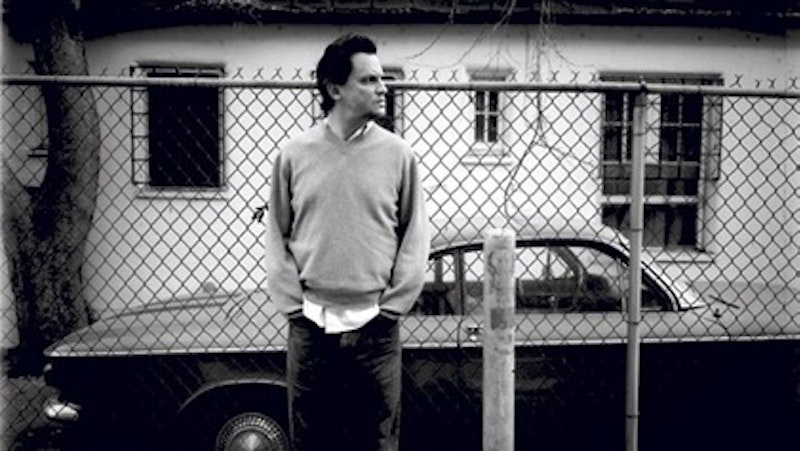 A few months ago, I wrote an article to occasion the release of April, Mark Kozelek’s new album with his band Sun Kil Moon. Kozelek answered some interview questions for me around the same time, but he’s also a notoriously prickly interview subject, not one to reflect at length on his songs or writing process, and I felt that his mostly one-sentence answers wouldn’t be that illuminating or interesting except to diehard fans.

But Kozelek just finished a relatively quick acoustic tour, and when I caught the Baltimore show last week I was reminded once again just how unique Kozelek is as a musician and songwriter. Which is not to say that he’s a flawless performer or that the concert was entirely compelling; it ebbed and flowed from exciting to dull before eventually finishing on a gorgeous note. As such, it was Kozelek in a nutshell: occasionally brilliant, sometimes indistinguishable from one song to the next, and ultimately worth the long commitment. So to honor that, I’ll print the interview here and give a more thorough response to Kozelek’s acoustic concert afterwards. A mixed bag, maybe, and perhaps only for serious fans, but that’s only appropriate given the subject.

I asked Kozelek about his new album; the new limited-run book of his collected lyrics, Nights of Passed Over; his approach to collaborations; and about the label he founded, Caldo Verde Records.


SPLICE TODAY: You've said that [2003’s] Ghosts of the Great Highway was defined by the theme of death, particularly the dead boxers that populate the lyrics. Then of course the Modest Mouse record [Tiny Cities, 2005] had an obvious unifying element to it. Is there a "theme" to April?

MARK KOZELEK: Not really. The songs are pretty scattered. The only “theme” is that it's from a different perspective—the perspective having living more years, been through more things.

ST: What led to the formation of Caldo Verde? None of your Red House Painters work sounds like the labels interfered too much creatively, so what's the biggest luxury for you now as a self-funded artist?

MK: One of them did interfere creatively—4AD had issues with some things I was doing. The others didn't interfere creatively, in a direct way, but some of them folded, dropped us, or put our records on the shelves for a while. This can fuck with you creatively. I don't have to worry about all of that with my label—like if the president is having issues, the label is having hard times, going to fold, etc. Signing to labels can be risky, they aren't free of problems—see Low, AMC, Luna, and dozens of other bands who have been on six or seven labels in the last 15 years.

ST: After Old Ramon and parts of Ghosts, it sounded like you were getting more comfortable splitting your albums between the loud, electric stuff and the acoustic songs. But Tiny Cities was almost all acoustic and April, with a few small exceptions, follows suit. Any reason why the amps have been turned down recently?

MK: Not really. Ghosts was pretty mellow, with the exception of a few songs, and April feels the same way to me. Tiny Cities was a 30 minute album—had it been 70 minutes plus, like April, it would have had more variation.

ST: How did Will Oldham and Ben Gibbard get involved with April? There seem to be more background vocals in general on this record. Have you gotten more comfortable expanding the roster of Red House/Sun Kil Moon collaborators, a list that's remained pretty small your whole career?

MK: These guys are getting a lot of attention because they are names, but collaborators with me over the years have included Bruce Kaphan and Tim Mooney (American Music Club), Davey Faragher (Elvis Costello, Cracker), Michael Urbano (John Hiatt; Smash Mouth), Stephanie Finch (Chuck Prophet), Hannah Marcus, etc.—the list is long. Eric of Retribution Gospel Choir sang more on this record than Will or Ben, but his name is overshadowed by the others.

ST: You're well known for doing covers, and you've said you particularly enjoy exploring other parts of your personality through things like the AC/DC covers record [What’s Next to the Moon, 2001]. Why was it important for April to be an album of all original material?

MK: I don't plan things like that. It's just where I was in my life.

ST: What can we expect for the upcoming tour? What's the difference in planning a set for a solo show rather than one for the full band?

MK: Just me and Phil from Red House Painters, two guys who have played together for a while. It'll be a relaxed set.

ST: What was the impetus for Nights of Passed Over?

MK: Some guys in Portugal had been bugging me about doing a book for years, and I finally did it back in 2002. I had an interesting time putting it together, but I decided to do a more accessible, affordable, improved version—and with Ghosts and April finished, it just made sense to update. It's been rewarding, in a spiritual way, to look back on things. But [it’s] a real undertaking for sure, putting a book together. You could buy a house for what you have to spend on a few thousand hardback books, so it's a tough thing to finalize, to put to bed.

ST: Are you doing any acting in the near future? [Kozelek has had small roles in Cameron Crowe’s Almost Famous and Anand Tucker’s Shopgirl.] You've expressed an interest in doing some meatier roles.

MK: If someone calls me, I'll do it. But I wouldn't know how to go about chasing acting roles.

ST: You've named an album Old Ramon and your record label Caldo Verde, written songs about Salvador Sanchez and Pancho Villa, and, on April, "Tonight in Bilbao." What about Spanish-speaking cultures appeals to you? Is this a remnant of living in California, or have you encountered Mexico and Spain more by actually traveling there?

MK: Old Ramon was named after a book I saw in a cafe in Austin, Texas. Caldo Verde is Portuguese. Pancho Villa, the guy I'm singing about, is a Filipino boxer who named himself after the Spanish guy. I just get the references from traveling around, taking an interest in things. I also have a song called “Japanese to English.”


Kozelek didn’t play “Japanese to English,” one of his oldest songs, at the Baltimore show, and in general he seemed pretty averse to nostalgia. Surprisingly, he pulled out a solo version of “Katy Song” from the Painters’ first eponymous 1993 album, and audience reacted appreciatively. The song, with its tormented lyrics and slow tempo, embodies the style that gained Red House Painters their earliest fans. Since that time, Kozelek’s lyrics have grown more impressionistic, his singing more mumbled, and his music more inclined toward acoustic folk. He’s left behind much of the wrist-slitting ruminations and moved his style toward a sort of droning Americana.

That sound predominated at Baltimore’s Ottobar on June 18, as did songs from his releases with Sun Kil Moon. Apparently Kozelek shares my affection for Ghosts of the Great Highway, represented by four songs, although unfortunately he didn’t dip into Songs for a Blue Guitar. He played a number of Modest Mouse covers, but none of the KISS and AC/DC songs he’s recorded with Red House Painters and under his own name. The accompaniment from Phil Carney on acoustic guitar was subtle (he was even sitting down, out of the stage lights) but occasionally resulted in some beautiful moments; both men largely fingerpicked their guitars, and the layering during the extended song “Duk Koo Kim” ended the initial set on a shimmering note.

The dual-guitar setup, however, mainly just called attention to the homogeneity in much of Kozelek’s songs, and at times even exacerbated it. Red House Painters’ and Sun Kil Moon’s albums are all about subtlety; small variations in instrumentation or the sudden appearance of a vocal harmony can give each song a unique character. Stripped of these things, however, the songs live and die on Kozelek’s voice, which is a particularly impressive instrument live, but not an especially wide-ranging one. In this kind of bare-bones environment, where all the songs are reduced to fingerpicking and a similar guitar tone, the sameness of Kozelek’s writing stands out more, and an ornately arranged song like “Gentle Moon” sounds exactly like the April’s sparse track “Lucky Man.”

In the above interview, Kozelek sold the tour as “two guys who have played together for a while. It'll be a relaxed set.” He followed through on this promise, and then some. The mood was almost overly informal, as Kozelek would finish a song and then tease various audience members who were at the Philly show two nights before, or chide the sound guy for a bad monitor by saying, “Stop doing coke and stuff.” He also gave a pretty severe ribbing to a fan who had followed the tour and wore a t-shirt, asking why he only gets lonely guys to display such devotion. I’ll give Kozelek the benefit of the doubt and say he was drunk; otherwise, he’s simply a gigantic asshole. Chatter continued in the back of the club, and one guy, seemingly there with his girlfriend, even fell asleep against a wall. “Can you guys just shut the fuck up?” Kozelek joked when the conversational noise grew loud, “I can barely hear myself up here.”

The whole event seemed pretty but lackluster up until the aforementioned “Duk Koo Kim,” which lasted nearly 10 minutes and closed the set. After a very short break, however, Kozelek returned to the stage alone and offered a half-dozen songs over three encores, all of which were stunning. With all the focus on him and his voice, the songs gained a genuine sparseness that prevented them from sounding the same. The attention returned to his lyrics and voice, both of which are a joy to hear live, and he played great versions of “Glenn Tipton,” “Moorestown,” and the aforementioned “Katy Song.” He took a request and couldn’t remember the lyrics, asking, “Does anyone have the book?”

Unsurprisingly, all conversation stopped during these encores, as if the audience were finally getting what they came for. No disrespect to Carney, but in the absence of a full band, Kozelek’s solo performances are enthralling enough in their economy. He’s a great guitar player, a surprisingly powerful singer, and with the generous reverb he uses, he can fill up a small room on his own. For all of the ups and downs, Kozelek’s concert ended on an incredible note, and the crowd filtered out looking largely impressed, as if over the course of two hours, we’d all forgotten and then remembered what makes this artist so special.