A Little Bit Country, A Lot of Disdain

At a time when people’s iPods are filled with all varieties of music, pop country is still reviled by many. 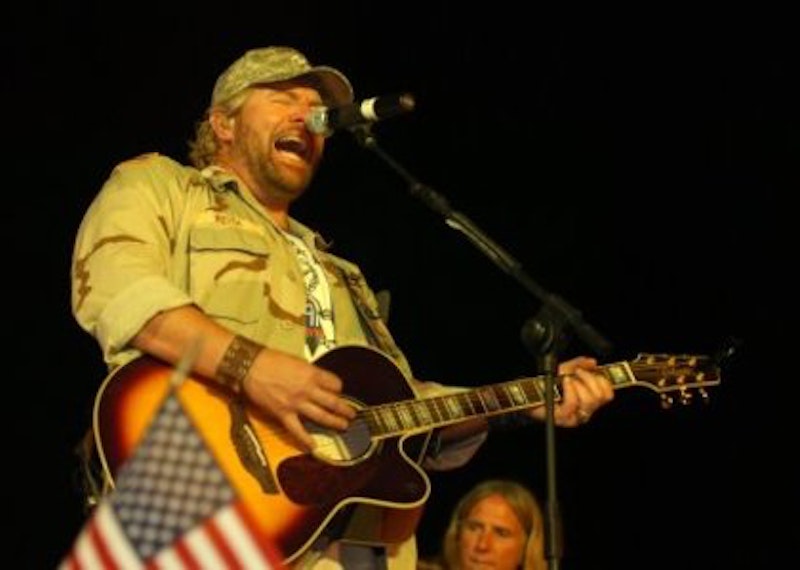 On Friday night I was sitting in my new favorite café, 'Snice, on 8th Ave. in the West Village. I love this place for its strong coffee, and its big communal tables just made for showdowns between Mac and PC users (on the night in question, Macs outnumbered PCs 2-to-1).

I was sitting, tapping away on my laptop, secretly glad that the wireless wasn't working because maybe I'd actually get some work done without the distraction of the Internet, and rocking out a little to my favorite playlist, when I noticed that the trendy guys at the table behind me had a view of my iTunes window. In its lower left hand corner was the album artwork for the song I was listening to at that moment, by one of my favorite country singers, Carrie Underwood.

They looked at me. I looked at them. They looked at Carrie. They looked at each other, disgust written on their faces. Then they held up a cross and a clove of garlic, and threw Holy Water on me. Okay, not quite.
But they did look truly mortified that they were being forced to share a space with me and Ms. Underwood, and as I turned back to my computer, the looks on their faces betrayed the kind of disdain, mingled with pity, that made me remember why I usually keep my penchant for country music to myself: people here are music snobs.

I don't say this to trash my adopted home of the last three years, and I certainly don't mean to insist that everyone love Tim McGraw the way I do. But I did notice, upon arriving at college and doing some old-fashioned Facebook stalking, that a lot of people seemed to describe their music tastes as "anything but country." In my freshman year, I happened to make friends with some of the few country fans on campus, and they introduced me to their much-reviled collections of twang. I started as a social listener, but before I knew it, I had a playlist-a-day country habit. I kept my addiction to myself, because on the East Coast of the U.S., country music is about as popular and desirable as an STD. Don't believe me? Let me tell you about my friend Maria.

Maria, a molecular biology major, did her thesis research on the herpes virus. When she used to reveal this to people, Maria told me, their attempts to hide their disgust for the topic made Jessica Simpson look like an Oscar winner, and the ensuing discussions always seemed to be an attempt for them to reassure themselves that Maria's interest in herpes was purely scientific, and she hadn't actually had to experience the virus to be able to study it. I like country enough to have spent this whole year studying it for my junior thesis. When I told people about my research topic, their reactions were much the same as the ones Maria experienced: "So, uh, do you actually have to, like, listen to it, and stuff?" This was usually accompanied by shuddering and grimacing.

Yes, I had to, like, listen to it. So, there's my confession—no, not confession, a loud, proud, proclamation: I like country music. I like twang and Southern accents and ridiculous, self pitying narrative songs about heartbroken husbands and cheating wives. I like funny song titles like "Jesus Loves You, I Don't" and "Tequila Makes Her Clothes Fall Off" and I love a man in a Stetson hat. But I realize that my music taste places me in a cultural minority in the Northeast, and especially here in New York City, so I guess I shouldn't have been surprised at the reactions of those guys at the table behind me.

I left 'Snice feeling dejected. Was there no one in this town who shared my love for Sugarland and Keith Urban? Was I really alone in thinking that despite being a native East-Coaster, Bon Jovi has never been sexier than during his recent foray into country?

Having recently discovered that one of the city's best vintage stores, Cherry, was only a few blocks from my house, I stopped in on my way home, and found the comfort I had been seeking. Waiting for me at the top of a stack of old t-shirts, as though the country gods had heard my plea, was a 1975 Hank Williams Jr. tour shirt, with "Bocephus" emblazoned across the front. I sighed in delight and asked the salesgirl how she expected to sell a shirt like this in New York City. "Oh I know," she replied, "people aren't really country fans around here, but we'll find someone who'll want it." She was right: I took it off the pile and tried it on.

Unfortunately, while it catered to my music preferences, the shirt didn't do the same for my budget, and I was struck by the irony of a very old t-shirt, made for fans of a genre that espouses living simply and without pretension, being sold some 20 years later in a New York City boutique at five times its original price. While I was trying it on, the salesgirl told me that she and her boss, who was from the South, were both country fans, and we talked for a while about our favorite artists. We talked about the Dixie Chicks and Tennessee, and what it is that makes country a genre unlike any other, and while I didn't buy the Hank Williams Jr. t-shirt, I did walk out knowing that I had found one place in Manhattan where my music choices were not reviled, but embraced.

I might be a private school girl from the suburbs of Sydney, and I might be living in the "anything but country" capital of America, but I left that store with my head held high. Then I turned up my iPod as loud as it would go, and walked defiantly home, “Redneck Woman” blaring all the way.