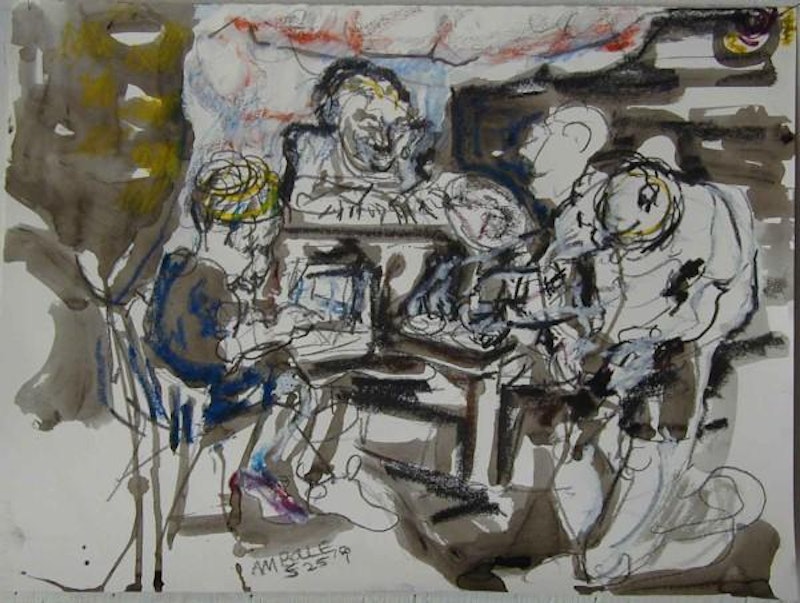 Listen. There’s a kind of breathing: a film projector threading, a tape machine capturing its own hiss, lips parted near a microphone, something. Then the pianos creep into the frame. They’re tentative at first, achieving greater degrees of confidence—the melody, which eventually is revealed as deeply durable, pays a bit of tribute to Fleetwood Mac’s “Landslide”—just as drones, samples, and effects crumple the surrounding ambiance ever-so-gingerly. These sonic outliers eventually usurp the piano, essentially becoming the core of “Hungarian Wheat,” with the piano reduced to intermittent cricket chirps. I can’t decide whether this song reminds me of an especially sleepy sunrise, a nuclear sunset, or some unholy combination of the two.

There is only one proper way to listen to “Flush”: over and over and over again, in a loop contemptuous of all known concepts of temporality. Where does the rain-on-aluminum-foil patter end, with that sound carefully broken? Where does the interstellar-travel FX begin in earnest? Who cares: a giant mechanical man approaches the city, crashing through the surrounding woodland. Deer are dying out there, man. This Geiger counter is wigging out. All of which is to say, somewhat obliquely, that “Flush” is restless—but not in the way that shitty big-budget popcorn movies are restless. Shitty big-budget popcorn movies are afraid to bore their audiences; Evertsz, I suspect, wanted to sustain her own interest long enough to complete this perspective shuffling (and compressing) piece, which to some extent recalls the veering musique concrete noise of Dead Machines’ Futures. Don’t leave home without it.

The production is how you know how not-serious and barely sweating shit these guys were when they cut “Tilapia”: sad-sack tuba blats, smooth-sipping bass, heavy-lidded guitars half-quoting Buffalo Springfield’s “Hey Now, What’s That Sound.” Urgency isn’t in the building, and wanting it misses the point, because this is the sort of posse cut where the camera casually pans from one cat to the next in the police line-up, lingering on each subject for several beats too long before moving on. Meyhem traffics in excess and X-rated gross-outs; AG Da Coroner comes off as a cross between Bizarre and SNL’s Stefon; Action Bronson’s fake Ghostface pose continues to be awesome; mostly, Despot wins the sweepstakes booby prize for fourth worst rap name of 2012. No one’s really saying anything here, but they’re saying nothing in a way that suggests they’re disassembling an artichoke with no center, where one peels away leaves without the artichoke changing in any discernible way. Thickened syllables, lurid detailing, and attitude coalesce into the kind of loutish ennui we used to expect from Wu-Tang Clan albums, then later from the solo albums of Wu-Tang Clan members, and for four and a half of the longest and briefest minutes ever, we’re fleetingly reminded of youth, carefree and open-ended, all ridiculous hats and Wallabies and bragging until everyone’s eyes were crossed.