The Long Drive Out of Town 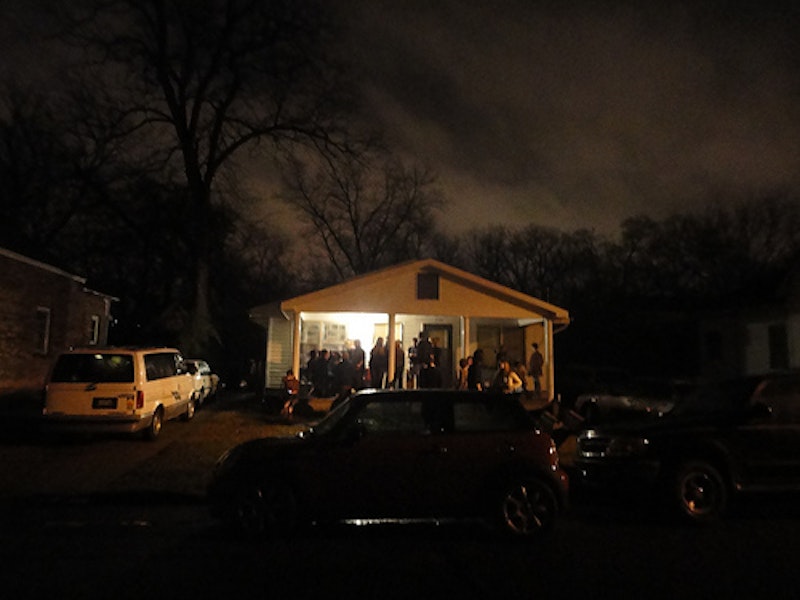 A few weeks ago I pulled up to a curb at eight p.m. in a rented Chevy to play a show at a stranger's house in Denver. After being in a moving metal rectangle for nine hours the other band and I were now waiting for people to show up. Mainly it was the promoter of the show whom we were waiting for. Some observations popped up.

There was a pair of large dogs in the yard. The home had a makeshift sign on white paper with the venue name on it. There were more than a few drunken people working the door and an equal number of sober folks chatting over smokes in the backyard. Everyone was wearing a denim vest. I found the last discovery interesting if not completely spellbinding. It was clear to me from the sum of my calculus that I was at a punk house.

The Merriam-Webster dictionary doesn't count punk house as a word. If someone had stepped up to interject "Well y'know, when two words with individually distinguished definitions tediously combine to describe the essence or feeling of an event or moment the difficulty of its inclusion has, in a sense, merit" I would have said "Right on." Unfortunately at that instance, that wasn’t happening. What was also far from being a reality, though we didn’t know with any certainty beforehand, was us actually playing at the show.

The clock struck nine and we waited further. At ten we made conversation with a few kids at the show. At 11 we alternated the activities of waiting and talking to strangers. After the clock struck midnight my friends and I were told by the tenants that there were too many bands on the existing bill. The fact that this was the third time that they voiced this opinion began to raise a collective eyebrow. It was in this way, through the sum of the growing facts, that we came to the indisputable conclusion that we had been overbooked.

The promoter did eventually show up and he called me, after we’d been on the highway for an hour driving out of Denver. At the time I didn't fault the promoter for our departure and I still don't. The true culprit was instinct. There's a point at which, much like the main character in a novel who has set to sea, a man unexpectedly finds himself in an alien landscape.

It's difficult to explain the emotions one feels when a parade of denim-vested moped riders some 30-strong whip past you at slow yet determined speeds. It's harder still to reflect how the prolonged stares from the door entourage at my ironed shirt stung my brain. Had I at that moment said, "I've got my thing and you've got yours but I believe there's something more going unsaid," I believe the philosophy student holding up a high five in the corner of my eye would’ve been left hanging.

I'm uncertain when I'll run into another situation identical to what I saw and felt that evening. It may appear months from now or it may never occur again.

However it comes, in driving away from Denver past midnight on that June evening I was mesmerized by the clarity of one haunting image. Two people are standing in an empty yard. Under floodlights ones says, "I had a rough day but this show is pretty rad."