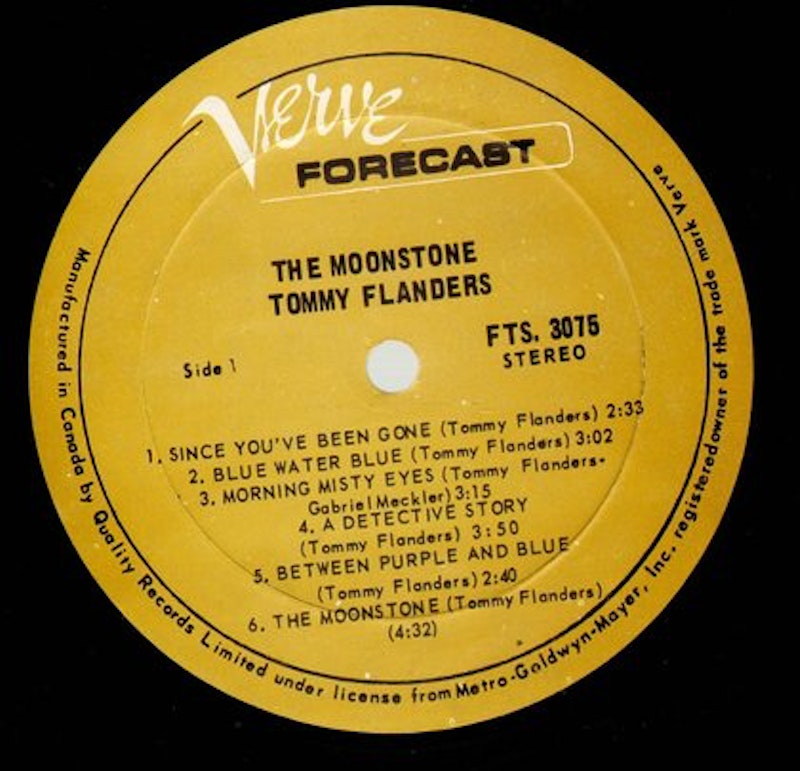 "Dick Tracy, Dick Tracy/with your detective ways/how can you find a love that's strayed?" Tommy Flanders sings on "A Detective Story." Dick Rosmini on guitar, Jerry Scheff on bass, and Michael Botts on drums all do a soft folk-rock stagger through the bleary light of Sunday morning, as Flanders sees the paper lying on his bed and half-consciously begs the comic-strip detective to search out the woman he seems to have misplaced somewhere in the night. Flanders' light tenor floats half-detached through the song, sometimes slowing and coarsening so he's almost talk-singing, sometimes lifting into an easy falsetto, at one point audibly clearing his throat, at another drawing a word out and out, a stoned, slow spontaneity in which details—the guitar run, the little shift in rhythm—focus and blur, Flanders' nonchalant nostalgia and lust drifting down like dust motes passing through a sun beam.

The woozy hippie sublime is entirely authentic—Flanders got his start as the first lead singer of the Blues Project. By the time they released their first album, he had already moved on. "A Detective Story" is from his one and only 1969 solo album, The Moonstone. After recording it, Flanders basically disappeared; he never made another record, and The Moonstone wandered sleepily into obscurity. Even the weird folk revival of the 2000s didn't rescue it from obscurity; Linda Perhacs, Vashti Bunyan and Gary Higgins were resurrected by the hipsters, but Flanders remains resolutely unknown.

Which is a shame, because if you have any sympathy for 60s folk at all, The Moonstone is a marvel. Flanders' folk dreaminess is anchored in a series of shoulder-shrugging grooves—his slow-rolling songs mine the sweet, unexpected common ground between Donovan and Willie Nelson.

The first few times through the album, the tracks blur into each other, a single slow blissed-out dream. On repeated listening, though, the different tunes start to cohere, like castles in the clouds if you stare long enough and ingest the right substances. "Blue Water Blues" is a spacious almost-rocker, with guitarist Bruce Langhorne edging up on Neil Young freakout badassery while Flanders' falsetto heads up to the cosmos before being pulled back down to the quiet glen, like a more bipolar CSN&Y. "Purple and Blue" is almost a parody-infuse Bob Dylan lift, complete with earnestly wailing harmonica—except, of course, that Flanders can actually sing. "By the Mailbox We Stood" is what passes for the album's rave up, a bluesy riff grounding some lyrical picking worthy of the Allman Brothers while Flanders floats above. "Blue were her eyes, blue were her eyes, blue were her eyes," he repeats ecstatically, before coming down to hit the punchline—"she told me lies." "Boston Girls" coyly plays with Irish dance tunes as Flanders drops flirtatious lines as easily as blowing a kiss.

The most distinctive tune, though, is the title track. "The Moonstone" is a bizarre, ominous minor-key groove, with strange organ washes, dramatic drone bursts, and spooky fusion-like keyboard motifs that sound like they'd be at home on a Steely Dan album. You might think that Flanders' light voice would be overwhelmed, but his singing works perfectly, with ghostly falsetto moans turning the innocuous lyrics ("In the street I'm goin' down/there's a water fallin' sound/as the rain keeps on pouring downnnnn") into impressionistic visions.

Sometimes with an underappreciated album you can come up with a reason why it's never gotten its due—because it's ahead or behind its time or too weird or the wrong genre, or something.  But with The Moonstone, I'm baffled. One of the greatest dreamy folk-rock albums of all time recorded smack-dab in 1969—it should have been a classic. Instead, it's virtually forgotten, and Flanders has disappeared into the misty haze that spawned him, drifting out into mellow pop culture obscurity, where even Dick Tracy can't find him.