Welcome to the Future 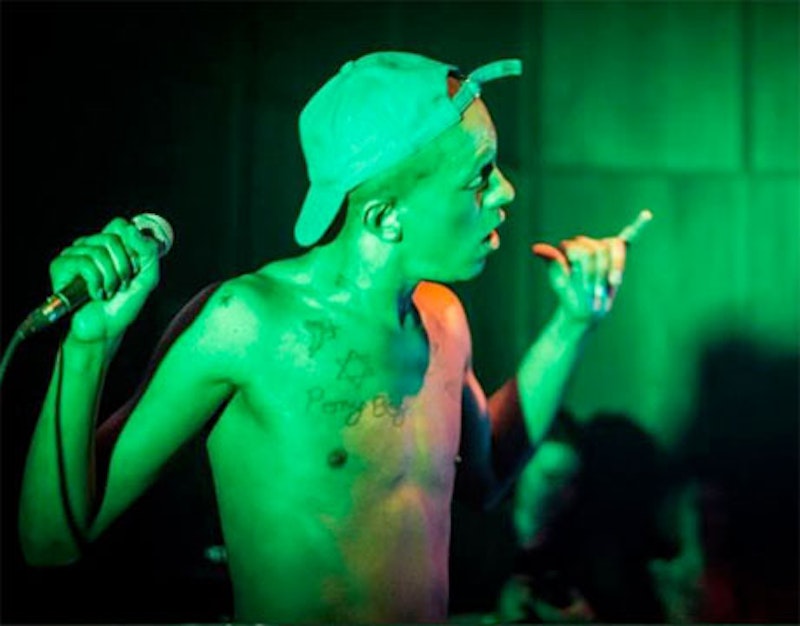 It’s sort of superfluous to talk about “the future” in 2013 because, if you think about it, the world we inhabit is, finally, a science fiction novel. This is obvious in the sort of technological whiz-bangery of magical devices and the democratization of creativity these afford by packing entire music/movie studios into a 9x14x1-inch box. Not to mention that entire libraries of media are instantaneously available at any kindergartner's fingertips. See, too, the triumphal ascendance of corporate power and its attendant regulatory too-big-to-fail/prosecute impotence. College education is somehow both necessary and completely useless for navigating the anarchic brave-new-world-y-ness of the “global economy.” And forget about any squeamishness you might have about dudes firing missiles on civilians from the comfort of their air-conditioned workstations, because that noise is a fait accompli, apparently. For better or worse, this is where we are and Mykki Blanco embodied this fact of life in the 21st century with rare force when he brought his present-as-future Initiation Tour to Baltimore's Metro Gallery last Saturday night.

Blanco, the rapper persona of poet, artist, all around awesome guy Michael David Quattlebaum Jr., occupies an aesthetic liminal space where 90s-era virtuosic rapping meets high concept performance art meets gender bending gutter culture. The arc of Quattlebaum's career is an object lesson in the sort of idiosyncratic trailblazing required to make it in the culture business in the 21st century: as a teenager he ran away to New York, dropped out of two art schools, performed in an industrial rock band and, in 2011, published a volume of poetry, From the Silence of Duchamp to the Noise of Boys. Quattlebaum's poetry typifies the artist's high-toned lowbrow aesthetic—high culture touchstones like Duchamp and the I Ching jockey for space in a “deluge of champagne or piss” with seedy nightspots and hustling boys. And the influences on his musical and performance style run the gamut from NYC boom-bap and riot grrrl to anime and outsider-culture-celebrating X-Men comics.

Though often framed as a drag persona, Blanco rather eschews the sort of either/or of male/female identity in favor of a more nebulously fluid expression of the masculine and feminine aspects of the rapper's performative ethos. Aside from contributing to his compellingly complex stage presence, Blanco's negotiations of gender and sexuality highlight the important but underplayed exchanges between hip-hop and queer culture, challenging the conventional wisdom of rap's hyper-masculine, gay-bashing ethic. More importantly, Blanco's boundary crossings engender creative spaces that defy pretty much any label you want to apply, but which are militantly non-normative.

Blanco declares in “Mendocino California,” the closing track on his superb 2012 mixtape Cosmic Angel: The Illuminati Prince/ss, “I am a warrior princess, accepting of the hybridity of my being.” Hybridity is important here, because though Blanco has been lumped in with the “gay rapper” label, mere sexuality seems less important to what he is doing than an insistence on self-determination with respect to sexual, gender and even racial identity (a Star of David tattoo on his chest signposts his Black Jewish ancestry). Blanco's celebration of hybridity was clearly in evidence Saturday, as the rapper commanded a space in which a diverse array of art school weirdos with Skrillex haircuts and Morrissey-esque NHS glasses mixed with dance kids in flamboyant, glowstick-trimmed outfits and a name-drop-able assembly of musicians who, in their own individual ways, participate in the creation of non-normative creative safe spaces. These include Baltimore-based notables such as the club producer Schwarz and the rapper DDm, as well as Blanco's friend and fellow NYC rapper Le1f. The scene's batshit collegiality was never more apparent than when Blanco invited whoever was inclined to join him onstage for the crowd-pleaser “Wavvy.” It didn't even seem to matter when the mic went out as the enthusiastic crowd sang along with the hook.

The Metro Gallery provided a perfect backdrop to Blanco's radically self-determined and inclusive popping off. The space mirrors the artist's embodiment of a multi-polar aesthetic, hosting rap shows concurrently with fine art exhibitions in the city's Station-North cultural district, directly across Charles St. from the Charles Theater. The high-gloss drapery and green-tinted spots contributed to the sense that Blanco convened this party in some sort of futuristic otherworld, in which art and identity are endlessly fluid. Blanco has dispensed with the drag element of his performances, focusing attention to his forceful rapping over druggy-sinister beats. Saturday's set featured many highlights from Cosmic Angel, including “Kingpinning,” “HazeBoogie” and “Riot.”

The self-described Black Sailor Moon capped this invitation to enjoy the future now in a thrilling freestyle that wrapped anime references around sci-fi standards like The Fifth Element, bringing home the sort of rarefied seedy aesthetic that pokes and prods at the edges of culture in 2013.