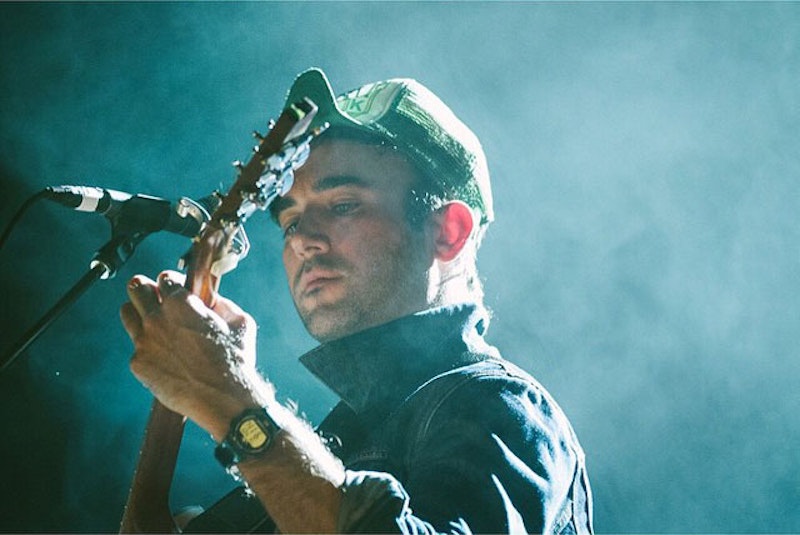 It was that name, really. Had it been called “Untitled,” “Gallons of Rubbing Alcohol Through the Strip,” or even simply “Noise,” it’s less likely that the noise community’s hackles would’ve been raised. Yet Sufjan Stevens had to go there, so these three quavering minutes of electronics, strings, bow-on-cymbal foreplay, and some dude caterwauling into a mic were christened “Harsh Noise”—a neophyte’s orchestral insult to actual harsh noise capable of turning the average Sufjan Stevens fan’s stomach. “Harsh Noise” isn’t an abomination or anything, but given that it’s only fleetingly interesting, expect anyone and everyone involved in or aware of the track’s existence to completely forget about it by Labor Day weekend.

Michael Morley, getting in touch with his inner Bill Orcutt? Given that we’re stranded in the interval between Dead C. albums, sure, why not? Most of The Burning House tows this line, piling up atonal, weathered chords (they are electric but they feel acoustic) that bleed through one another to suggest a core melody that isn’t quite there. Morley’s playing comes across as a kind of searching or clearing, maybe, lashing out a autumn leaves with a rake to find the driveway or riffling through mounds of dirty laundry to locate a set of keys. Or, if you’ll allow me just one more desperate metaphor, half-heartedly rubbing sticks together to start a campfire on an unforgiving late November evening. Something special is happening here, something separate from and apart from Morley’s recent solo work under the Gate moniker.

So frequently is gear-headed archeology the lens through which Richard D. James early-2015 turnout of his archives is viewed that considering these dozens of gems from any lower level can feel something like heresy. It’s also a humbling reminder that, relatively speaking, I’m a fair-weather Aphex fan who’s in it for the tunes. “Parking Lot”—a tune, all right—pops, locks, and keens like an endless, late-August block party you weren’t invited to, with disco, house, pop and funk force-fed through James’ drum’ n ’bass colander for what should seem like an uncomfortably long stretch yet isn’t quite long enough. Every snare snap represents a reveler’s wish; only a quarter of those wishes will come true.