Excitement is contagious, especially at a concert. 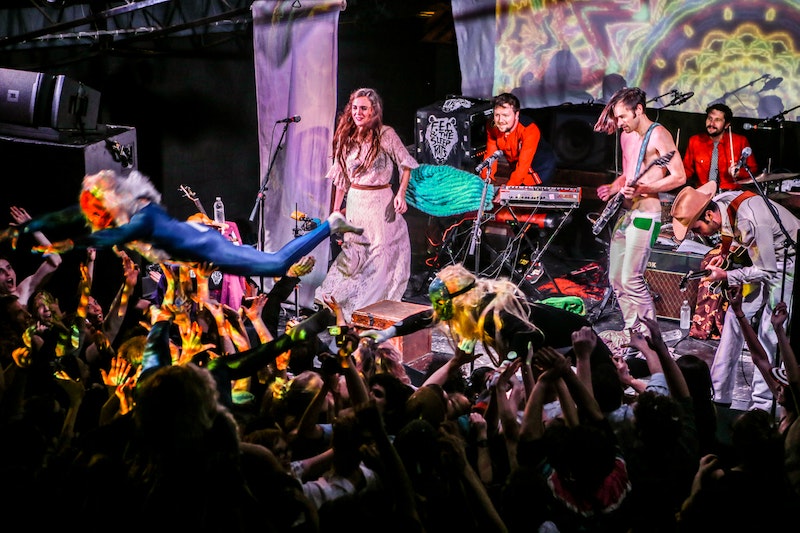 The best concert I’ve ever been to was an of Montreal show at Baltimore’s Ottobar in May 2014. They weren’t promoting an album—crazy, considering they release one almost every year—but a documentary: The Past Is a Grotesque Animal, which was ostensibly designed to make you hate Kevin Barnes (weird career move). As a result, the set list looked like a greatest hits compilation, with most of the songs culled from their most fertile period, ’04-’08. The crowd bobbed along with “Heimdalsgate,” screamed when “Suffer for Fashion” started, and ba-ba-ba-ba-ba-ba’d to “Oslo in the Summertime”; they were into it.

The band sucked when I saw them again last month. My brother, who went to both shows with me, agreed: Kevin blew. The band’s lineup changed—at first I thought that was the sole cause of their incompetence, and really, they were incompetent. Barnes couldn’t find the mic, he flubbed a couple of chords, and where was that killer keyboardist? (Also: cowboy costumes? They could do better). I reconsidered my indictment of the band when Nicky and I compared the two concerts on the drive home.

The 2014 show was alive—the crowd didn’t move with Barnes, they reacted to him, fed off him; he probably fed off them, too. The 2015 show was flaccid, sterile—Barnes had nothing to work with save a couple of head nods and dozen iPhone video journalists. The difference can be explained by the day of the week and the political context. The 2014 show was on a Friday; 2015 on a Sunday. This dynamic is better understood through the lens of a teenager (Barnes’ most ardent fan group): weekend vs. school night. Even the cool parents probably put their foot down given the political climate—it was the last night of Baltimore’s curfew, trepidation is understandable.

So maybe that’s what turned a great show into my favorite, and a bad one into an awful one. Teenagers respond to music with a fervor that twentysomethings hold back in fear of embarrassment, that thirtysomethings can’t muster, that fortysomethings have to deal with, because Dammit Jessica, turn down that music!

Kevin Barnes makes psychedelic synth-pop with melodramatic, pseudo-literary lyrics: he’s Morrissey for Millennials. You can bet people over 25 will come to an of Montreal show, but you can’t expect them to dance, let alone sing every lyric verbatim. And sure, sometimes all that audience participation isn’t welcome, especially when the entire floor turns into a mosh pit or you have to fend off tweens from hugging you out of sheer happiness—but you can’t deny the energy.

My favorite band of late is Bully, and I saw them live two weeks ago at the 9:30 club, opening for Best Coast, a group I haven’t cared about since 2010, my sophomore year in high school. Bully was great—Alicia Bognanno’s wail is even more impressive in person—and they were the only reason my friend Alex and I were in DC at all. The show sold out, but the crowd only started to materialize toward the end of Bully’s set. I looked around after Bully walked off stage and was surprised: the floor was filled with high schoolers, most of them wearing Best Coast t-shirts and backpacks, their parents the only wallflowers in the room.

Neither Alex or I dig Best Coast; we planned on leaving right after Bully’s set. The crowd swayed us, though. Their palpable anticipation was enough for us to say, Two songs, max—if they stink, we’ll leave. The crowd went nuts, like expected, when Best Coast walked on stage—Bethany Cosentino said something about loving DC and then launched into their first bland surf pop song. Purple lights flashed on and off, some dude yelled about a cat, the crowd sang along. People danced, yelped applause—Best Coast were like an overqualified prom band, one that no high school could ever book, but still pop up in movies like Ten Things I Hate About You. If I liked Best Coast, it probably would’ve been a great show.

Best Coast sucks, though. We left after the second song.