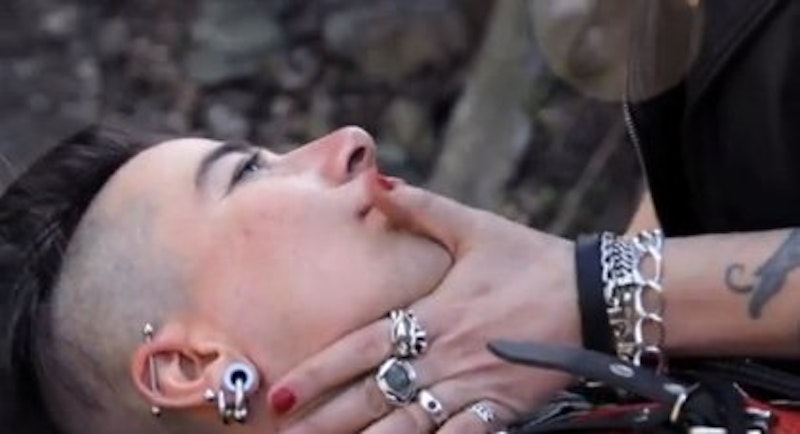 Welcome to a non-contiguous tapestry of loose ends. Less a song than one trapdoor after another, "A Nasty Break, Part 1" has the amazing ability to suggest, somehow, an emptiness more infinite and stultifying than actually emptiness. It's like listening to a starker, less compelling Hello Astro banger. The steals are implied and you can almost guess who's being burgled, but Dial Up Modem dangle that carrot just a little too far out of reach for you to get it. A snatch of struck snares, a sliced sliver of rave-ready toasting, a tantalizing taste of manipulated bells, a smattering of electro, or synths, or vocals fed through a laptop's digestive system: all of it triggered according to some unknowable reasoning that's all the more aggravating because, well, it's almost knowable. And whenever I try to reconstruct this song without listening to it I feel like I'm contemplating a dimensionless quagmire from the losing side of a one-way mirror—which may go a ways towards explaining why this project is named the way it is.

I'd listened to "Das Ist Nicht Der Stuck" several times, during walks, at work, just before bedtime, before taking notice of the accompanying origin message and realizing that no one involved in the making of this recording was actually taking the piss. There are two competing dynamics at work in "Nicht": a) the purposeful avoidance of capturing a composition in full as it is performed, and b) the framing of audience chit-chat as part and parcel of a non-performance. I mean, I bought the extra-orchestral chaff straight away—avant garde types love to josh the squares with errant cello scrapes and shrill tuba warm-ups—but I was certain that C. Reider faked the stilted conversations and imported them in as some sort of meta-commentary on how buttoned up and boring conservatory society can be. Which isn't to say that "Nicht" isn't framed as a commentary, but is it even? If the listener zones out and allows the voices to be framed as just voices that are sounding but aren't communicating anything, there's something fragmented by beautiful, natural, and vaguely poetic about how this collage shuffles along in circles, never actually arriving anywhere.

The Knife, "Full of Fire"

There's a lot implied here, a lot to unpack, not much helped by the fact that I slept on these Swedes when they were bent dance pop. Now they're bent dance-noise pop with (it's said) a side of gender-studies politics, but fed through whatever grated sieves they're employing, "Let's talk about gender, baby" scans like "Let's talk about gender, VVS," a misheard phrase that deserves its own Women's Wear Daily editorial. Whatever: the Knife (video, pictured) are so sonically interesting right now that literal narrative's a sideshow unless you personally need it to mean something.

Sometimes, where I live, long, long lines of railroad cars snake along the tracks, stranding motorist waiting to cross. Often these cars are slandered with layer upon layer of graffiti rendered anonymous via said layering, and as you watch them pass by, there is a sense that there are too many railroad cars, the graffiti too dense, and then after the longest time it's just over, those black and white barriers rise, and you want that defaced, grumbling monster of a train back.