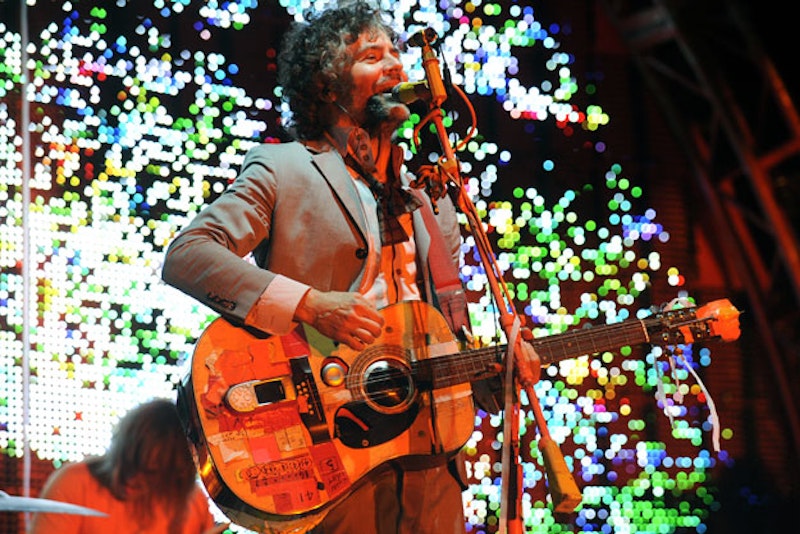 The Flaming Lips have had a tumultuous career. They got their start in the 80s as a psychedelic noise band, before embracing a more listener-friendly format nearly a decade later. The downtempo electronic atmosphere of Yoshimi Battles the Pink Robots was an evolution from The Soft Bulletin, but it wasn't until 2009's Embryonic that they returned to their experimental roots. This, perhaps unexpectedly, raised some eyebrows, but then again 2013 has been the year of musical re-invention. On the band's new album, The Terror, the Flaming Lips have side stepped the pop formate completely.

During a first listen of The Terror, I thought I'd accidentally put on an album by The Liars. The opening track, “Look The Sun is Rising,” has a click of harsh static hard panned to one side while an industrial drum kit competes with some a guitar that sounds like a guest spot by the late Birthday Party guitarist Roland S. Howard. Indeed, industrial would be the most appropriate way to categorize the majority of the tracks on The Terror; the album sounds more like German industrial band Einstürzende Neubauten. “Try to Explain” injects a bit of theatricality by way of a Wayne Coyne vocal progression, the sole element that doesn't feel like it's flying away. The other instruments—a church organ synthesizer and a flanging tone—conjure up an impressive largeness. The Terror isn't huge on instrumentation or structures that you can pin down. “Butterfly (How Long it Takes to Die)” is the only song that comes close to sounding like coherent rock: a bassline, instruments, a vocal, and a guitar.

It's not a secret that some of the best records usually feel like they are a unique and spontaneous occurrence. With The Terror, it's impossible to tell whether the band laboriously recorded the album over months and years, or over one very stoned weekend. Much like the Liars record Drum's Not Dead, the music sounds chaotic more often than not. The title track is a looped drum kit cut into a techno beat. Seemingly aware that the song is too unoriginal, the band drops a loud synth into the mix halfway through. It may cause you to momentarily remove your headphones, but it doesn't feel out of place. Though mixed more evenly, “Turning Violent” is possibly the most unsettling track on the record. Coyne's vocals are usually childlike or whimsical, but his mantra-like repetition of “turning violent” becomes deeply unsettling after a few minutes. “Sun Blows Up Today” is the only standard Flaming Lips song on the album, but it feels like a transparent record company inclusion. Maybe that's the only deal the band could strike to be able to release whatever they want; if so, it's not such a bad deal.