The Blankness of Pop

Little Boots will shake your brain. 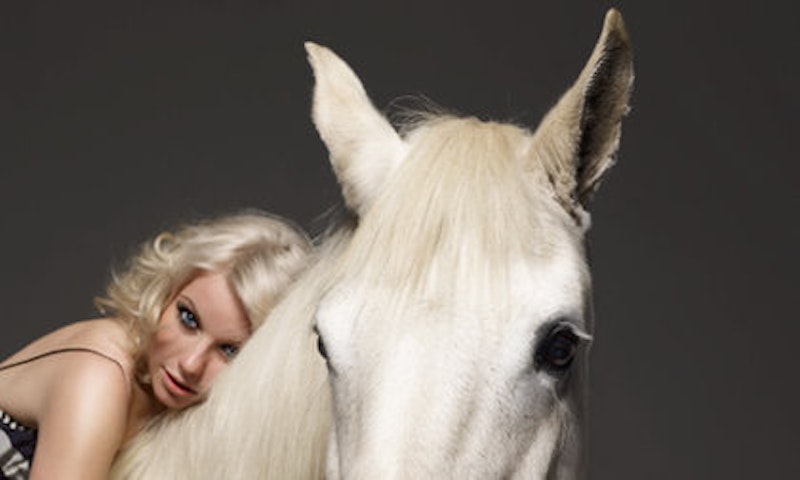 English singer-songwriter Victoria Hesketh, aka Little Boots, joins better-known peers like Robyn and Björk as a purveyor of dance electropop meant to shake your brain as well as your butt. The title of her newest album underlines that point. On the one hand, Nocturnes can be read simply as music for the night—rhythmic thumping to keep you up into the wee hours. On the other hand, though, it suggests the quiet and melancholy of classical composers like Chopin, sundown as a prelude to sleep rather than sweat. The album, then, half-promises something downbeat, in various senses.

That half-promise is half-delivered on. Lyrically, Nocturnes definitely leans away from Dionysian abandon, lust-fueled sensuality, and trance-like head-nodding. Instead, the words tend to talk about sadness and missed opportunities. On "Confusion," Hesketh intones, "I've been caught up in a lie/haven't called you in a while/confusion," the processed vocals turning her into a sad robot, looking longingly at its cell phone. The sweeping build of "Strangers" suggests a coming catharsis belied the lyrics futility: "I sit alone and feel regret/you go out drinking to forget."

But these gestures towards a less sunny after hours never really move beyond gestures: the lack of connection doesn't quite connect. "Strangers," for example, eventually, and almost helplessly, heads towards the bathos of release. When Little Boots declares, "I know you so well that we dance like strangers tonight/no one could ever tell we used to hold our bodies tight," the nostalgia slides towards rapture, the sadness fueling the bittersweet dance rather than dislocating it or pulling it into some less generically surging equivocation. Similarly, while "Confusion" may talk about being confused, it doesn't really sound confused. That sad robot comes across as awfully cheery. Other tracks, like "Shake," are content to thump along to a standard issue house throb. I guess you could see "Everybody shake/until your heart breaks" as ironic if you wanted to. But "People get ready/it's your time to move/coming together as one" starts to sound uncomfortably like it was composed by a self-help guru.

The disconnect between Nocturnes and the negative emotions it seems to want to access reminded me of Heather Love's book Feeling Backward. Love argues that queer politics and criticism has been reluctant to embrace negative feeling. Queer works from the past, like Radclyffe Hall's Well of Loneliness, which express shame, melancholy, self-loathing, or despair tend to be rejected or dismissed. Nocturnes, in some ways, reproduces the leeriness which Love discusses. Bad feelings, or sadness on the album aren't so much explored or felt as overcome through dance floor transubstantiation. Nocturnes, it appears, doesn't mean, "dance pop in touch with the potential of feeling backward." Rather it means, "feeling backward will be transmuted to dance pop."

For Love, the phrase "feeling backward" doesn't just mean feeling bad. It also means, or can mean, art which is reluctant to speak, or turns away from an audience. She points to Willa Cather's Not Under Forty, an essay collection which, as the title says, claims to be addressed only to the old, and adamantly not to any future readers.

It may seem odd to write about a dance-pop artist like Little Boots in this context. Nonetheless, alienation is my central experience of the record. The refusal to engage with the sadness suggested by the title—the refusal to feel backward, or badly—ends up, for me, feeling backward, or like a turning away. I’d hoped for some personal touch that defied genre pop, and instead, there is just genre pop itself. The ingratiation itself feels like a mask. Take, for example, "Broken Record," a song about that ex who keeps coming back. "I hear your voice like a broken record/saying my name every second," Little Boots says again and again, the angst turned into an annoyingly cheerful iterated pop yip. It's an irritatingly familiar song about the irritation of familiarity. No doubt the repetitiveness is supposed to be a cute gimmick, but that cute gimmick feels hostile when repetition is so deliberately presented as aggression.

Whatever you think of Xenakis or death metal, there are plenty of people who hate dance pop. Insofar as Little Boots veers towards idiosyncrasy or sadness, she’s taking at least a step in the direction of those folks. But then she turns her back, and we are looking once more at that conventional wrongness, the blankness of pop.