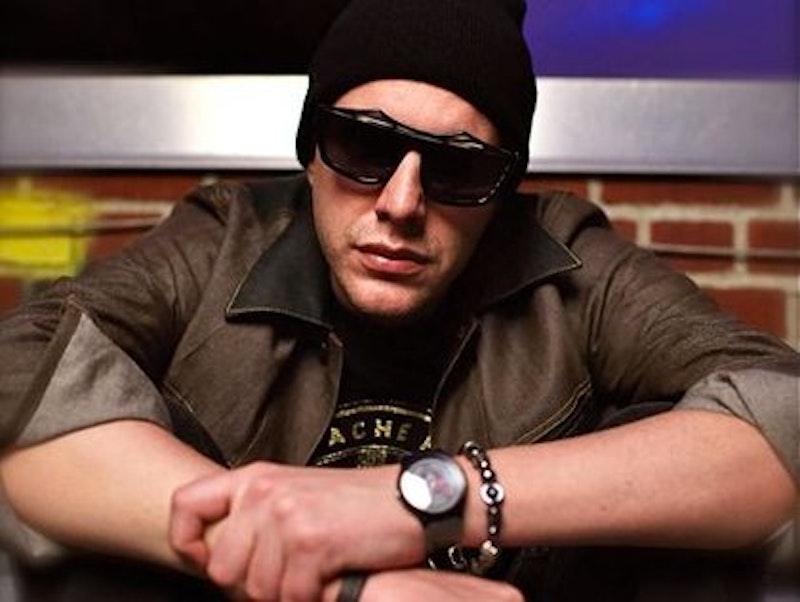 
Kyle Clyde—formerly of NYC, situated somewhere in the wilds of Massachusetts today—is inclined, mostly, to indigestibly harsh-if-detailed industrial noise, though early album Beyond the Mencius pooled warm, inviting drones. But "The Facts," from her new-ish cassette The Cover Up, might be Clyde's quietest, gentlest material yet. Thermochromatic sproinging effects and strategically deployed synth depth-charges frame wordless, comet-tailed ahhhhhs that evolve, over time, from questing to ecstatic; that wonderful tape hiss swaddles everything. Then the spell breaks and we're face down in a crowded garden of micro-electronic loops and gizmos popping like rutting grasshoppers, all over and under one another and unapologetic about it; there's a muted Jiffy Pop vibe at work as Clyde toys with the listener by adding and subtracting the number of loops and gizmos and whizbangs swarming. By the end, our ears are ringing with the commingled mating calls of a robot cricket horde. "Facts" feels like a curio in this artist's burgeoning discography; I'll keep my fingers crossed that it's anything but.

In some ways, "Yacht Lash" (pictured: Harry Fraud) is the event-rap don't-call-it-a-single equivalent of something like the Flaming Lips' The Terror: just a whopper of a bad-trip time that betrays flashes of brilliance on the part of all parties involved. Harry Fraud's beat is a Bermuda Triangle of clattering beats and near-sighted, upset-stomach synths lurching through back allies. If you're planning to rock "Lash" at a party, leave me off your invite list, please. This is dark, cerebral shit that should probably be experienced solo (in daylight, for safety's sake), maybe while cruising the city in a Scion smothered in skeleton appliques, without rhymes spattered overtop.

But there are rhymes aplenty anyway, and they're collaged to project ennui more than to tell a story. Earl Sweatshirt wanders in, feeling his way through the early verses like someone riffling, uncertainly, through someone else's purse for something specific. Then when he finds what he's looking for a confidence colors the track: shit gets writerly, craftsman-like, the way images and moments are sausage-linked tangentially and have the effect of drawing you into an un-defined world beyond the immediate torpor of the beat. Everything's considered, everything's connected, intricately.

There are two Earl Sweatshirt songs on iTunes right now, and they’re great. There are a million Riff Raff songs on iTunes, and most of them are sub-Lil B lame. Recently, flush with iTunes wealth, I tiptoed through the man's tulips and was dumbstruck by a) the inanity of it all and b) the fact that the cover art for Riff Raff's many and sundry abominations trumps the actual music. His presence here has me wondering if he's maybe best utilized as a clean-up batter, a second-spot rapper, a jester whose role is to get the crowd moving towards the exits—i.e., the desert, rather than the main course, though his placement on "Lash" is equivalent to George Carlin opening for Howie Mandel. In any event, the recipe is a non-sequitur salad shooter poltergeist, a progression that leads from "Versace Lasagna" to "Versace helicopter" with "On a desert island, I'm splurging on these virgins" somewhere in between and "Sushi!" adlibbed as a sign-off; take that, Gucci. Going nowhere.

"I am the day Ice Cube met Michael Jackson," Kanye West once declared. By that rationale, Riff Raff is the day Beck joined Puff Daddy in the studio and confused the Bad Boy mogul by rapping about how expensive his hormones were.

Solid friendships are tough to sustain; they're work, basically. The sweat equity of the earliest years doesn't (or shouldn't) feel anything like sweat equity; it's just hanging out, shooting the shit, unintentionally laying a foundation and building a mythology. The going gets grueling when you're not able to see one another every day, and suddenly months or years go between phone calls, and the e-mails no longer happen every day.

In my reading, "Sidekick Anthem" is Austin country artist Terry Allen's burlap-throated Valentine to what a true friendship is—a grizzled if generic way of affirming, or re-affirming, the singularity of a relationship between two people who know one another well and share a platonic, titanium-plated affection that goes beyond situational acquaintance. It's something that is, forgive me, "for life"—like a tattoo or a prison record. A real friendship ebbs and flows, but it's eternal and stubborn. No matter where in the world you are and no matter how low and confused and unsure of yourself you may feel at any given moment, you can depend upon it.

Our individual lives can feel like prisons, in a way, with their own peculiarities and frustrations and pleasures, feelings and experiences wholly distinct from friendships, but the sense that these friendships could become unmoored is scary, as well it should be: if you're not scared, not even a little bit, you don't care enough, and maybe you never did.