8 Things You Learn At A James Blake Concert 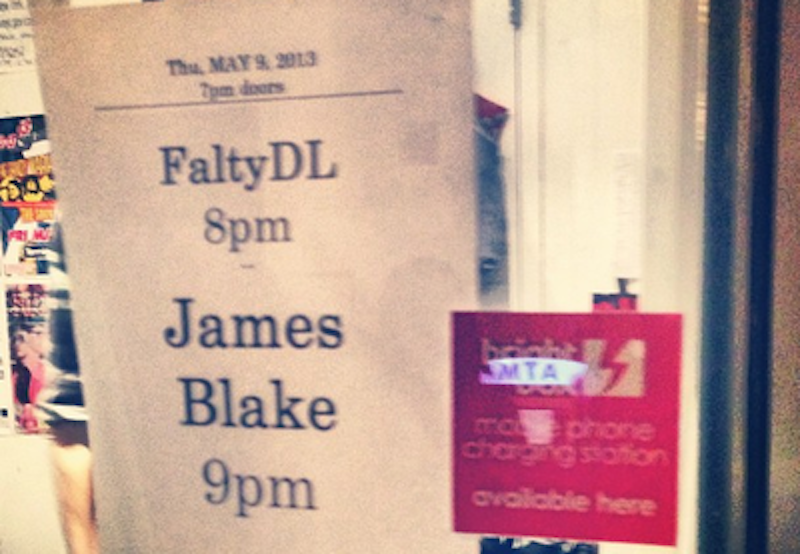 I’m a little bit obsessed with James Blake. Not in a creepy slash stalker kind of way, so don’t worry. It’s more that his music pours straight into my soul, and to me, good music gives you an orgasmic experience. There’s nothing better than a song you love wobbling through your body. And Blake’s music is the kind of stuff I feel like I’ve been waiting my whole life to hear. And that’s when you know somebody has hit a stroke of genius—when their sound is so uniquely theirs and so obvious you can only think, “Why hasn’t anybody else done that?”


I saw Blake play Terminal 5/Club Exit (RIP) in New York on May 9th. My friend Julie and I went together because I surprised her with a ticket to the show for her birthday. She’s the one who introduced me to him via an amazing Interview magazine profile from a few years back. She’s obsessed, too! Every other day leading up to the concert we joked about the metaphorical three-way we were going to have with him backstage. Of all the great new albums that have dropped this spring so far, his was the one that excited me the most, and the concert couldn’t come any faster.

Seeing live music is always… interesting! The music is good, or maybe you’re a little disappointed. Either way, it’s always an educational experience. Here are eight things you learn at a James Blake concert.

His Crowds Are Really Diverse

The crowd at the concert was surprisingly diverse, much more so than the majority of indie acts I’ve ever seen. There were older people, like mom and pops age, people of different racial backgrounds, gay people, straight people, music nerds, hip-hop heads. It was definitely a sight—especially for some tall white boy that not a lot of people in the mainstream know about yet. People say music brings people together. And they say it so much that it’s kind of a cliché to hear. But it does! Blake’s musical palette easily brings together hip-hop, dance music, electronica, blue-eyed soul and R&B, which means that everyone who likes any of those genres shows up for him.

Once you find your spot on the floor near the stage, you think everything’s going to be okay. But then the music starts and everybody rushes to the stage. People try to stand directly in front of your line of sight—including some tall dickface who doesn’t realize how fucking big he is. Someone failed to tell him that it would be better if he stood at the back since, you know, he can see over other people’s heads.

People Will Be Smoking Weed

On our way to the concert Julie and I grabbed a skinny bitch’s dinner: tortilla chips and a soda. But we had to scarf it before we got to Terminal 5 because we knew they wouldn’t let us bring bottles in. Fear that that shit might be spiked. Anyway, when the ticket bro inspected my bag he told me I had to throw away my chips. Really? I can’t bring chips into the venue? And yet, seconds walking into the venue the first thing you smell is weed. Like a cloud of weed just floating over the whole space. Like a single joint is circulating throughout the whole venue and everybody’s taking a hit.

Smart Music Can Be Popular

I love James Blake because he’s a classically trained pianist who’s figured out a way to approach music composition seriously and still produce fun, amazing beats. You can sense the classicalism of his stuff if you listen to it closely. The eerie harmonies. The intriguing melodies. Even the title track on his recent record Overgrown opens with a kind of improvisatory tuning of the piano. Throughout the night he played harmonies that were so powerful that people involuntarily shouted, “YES!” The fact that this concert was sold out, and really all of his shows are sold out, means there’s a hunger and an appreciation for smart music that cuts across genres. Not every song has to be stupid and repetitive.

Somebody Is Going To Stink

You’re already packed in there like sardines. This person is going to slide their way through the crowd to get to the front. You will be very annoyed but you will allow him to pass because he stinks.

People Will Be Making Out

I personally have never made out with anyone while James Blake played in the background, but boy does that sound like a great idea! There was this couple behind us at the concert who made out the whole time. I don’t even know if they heard any of the music. Look, I understand: your boy/girlfriend is hot as shit and boy are you two going to have great sex when this is all over. But, um, are you realizing their hotness for the first time in life? I don’t mind people making out at concerts, especially not when the music begs to be made out to. But sometime it can be a little excessive, people.

He Is A Very Generous Performer

The show began at around 9:10 p.m. and he left the stage for good at 10:40. I kept checking my watch not because I wanted it to be over, like the girl next to us who Googled “when is the James Blake concert over” on her phone (smh). I checked because I was curious to see how much he would give us. Didn’t want it to be over. An hour and a half show is pretty unheard of now. I’ve seen so many 45-minute concerts that it’s crazy. Are today’s pop performers lazy asshats?

It’s hard to hear all the bass in Blake’s music if you don’t have an awesome pair of headphones. And even if you do, there’s still nothing like being blown away by a billion watts of bass coming out of an expensive-ass sound system, shaking your rib cage when you least expect it.