"Live It Up" and too much time with Pitbull. 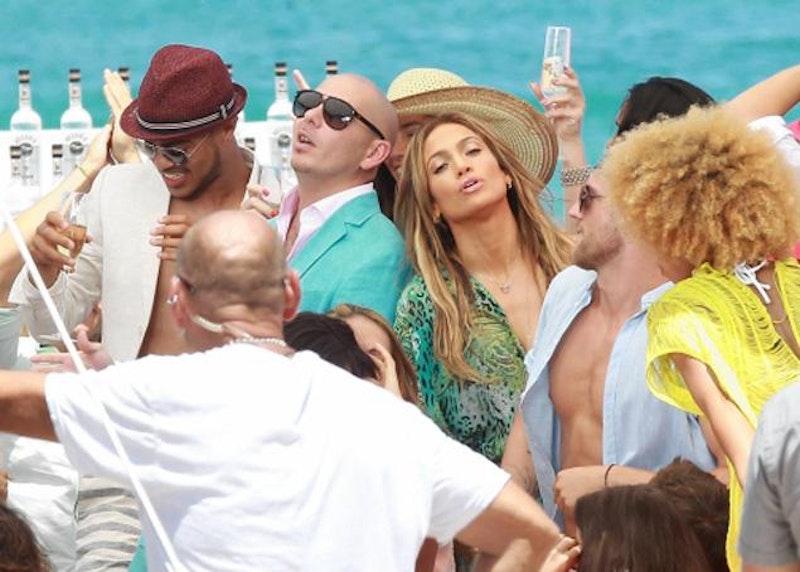 "Live It Up" is Jennifer Lopez's third collaboration with the rapper Pitbull. Journalistic courtesy demands that I spend some time with the first two. My problem with that is two-fold: first, it would force me to spend more time with Pitbull than I'd prefer, and second, "Live It Up" is such a raging clusterfuck of ham-fisted trends and anti-trends that it's physically difficult to turn away from it.

It surges and crashes so orgasmically that's over before it's even had a chance to go anywhere, leaving the listener feeling vaguely used and adrift; it's like having a monster wave hit you and not really remembering anything about the experience immediately after. Worse: it rips off Nine Inch Nails' "Mr. Self Destruct," a bit.

"Scream & Shout," will.i.am and Britney Spears' recent, considerably haughtier ode to conscientious, taste-making partying, had far greater nutritional value than this Pitbull/J.Lo counterpoint possesses. So does "Gangham Style," which "Live It Up" emulates in ways that I can't put my finger on, so that instead of just having to mentally picture Pitbull in full-on beverage advertisement mode, bald and rocking a suit and those bullshit sunglasses with a cadre of female back-up dancers, I have to see Pitbull aping Psy, doing that horsey/cowboy maneuver, maybe with J. Lo by his side, attempting the same moves out of amusement and solidarity, while sipping a Bud Light.

I can't believe I just typed that sentence.